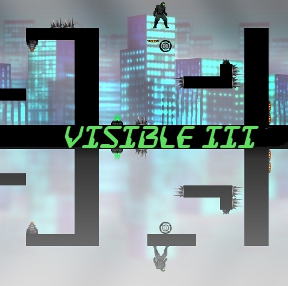 Do you remember when you were a kid and you used to climb across furniture because you were pretending the floor was covered in lava and snakes? Well, get back in that mentality, because in Visible III by Thomas Griffin (PsyFlash Productions), it ain't just the floor that's dangerous. Dust off your climbing skills for a challenging platformer where you play a spy-type-dude running a series of obstacle courses that would do dear ol' GLaDOS proud. Sure you can manage spikes, lasers, mines and more... but can you keep track of the danger when you're playing on two different screens?

Use the [WASD] keys to move around; press towards and up against a wall to climb it, or hold up while jumping when you're close to the ceiling to swing your way across monkey bars style. You can only do this as long as your grip holds out, represented by the green bar in the middle of the screen. Above that is a blue bar which represents your ability to turn invisible as long as you hold the [shift] key. You'll need to utilize both abilities to make it past the numerous fatal traps and reach the exit. What's fatal? Most everything that isn't you. Since you die with a single hit, you'll want to be very careful and keep you eye out for checkpoints, signified by green flags, which is where you'll respawn.

The hitch? You're playing on two screens at the same time, one an inversion of the other, and while both of them may not show the same obstacles or traps, all of it is fatal. Can you manage to keep your eyes on both screens at once? There are fifteen levels, an additional five "Gauntlet" stages, and a level editor to let you create your own death trap, or play someone else's. (Isn't sharing wonderful?) 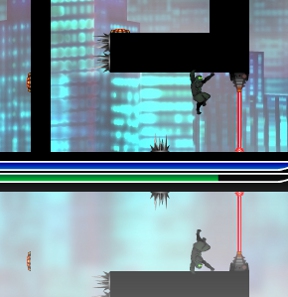 Analysis: While having to keep track of two screens with two different sets of obstacles and fatal traps sounds like a good way to give yourself a nice old fashioned case of madness, in Visible III it works... mostly. It's definitely an adjustment to make, and you'll probably come to appreciate how lenient the game is at least as far as allowing you to respawn without penalty. This last in the series is undeniably the most polished, but it's also the most sadistic in terms of difficulty. The two screens are disorienting to say the least, and it takes a while to get the hang of things.

The downside is that the controls are almost too responsive. When simply brushing your toe up against a spike results in bloody death, the last thing you want is for your protagonist to spring around the screen like an exuberant baby deer. And while the levels are challenging, they're not what you might call particularly varied. It would have been great if the game kept you on your toes with constant surprises, but as it is, it's hard to feel particularly threatened by a bunch of mostly stationary traps. The game does introduce new things to avoid as you go, but they're mostly just variations on "don't touch this". Fortunately, the levels are very cleverly designed, so beating them always feels satisfying.

Although the main campaign is relatively short at only 15 levels, the level editor allows for virtually endless fun, as long as your idea of fun corresponds with the sort of unforgiving platforming generally associated with certain Mario rom hacks. It's the last in the series, and a well made finale to cap to it all off. Welcome to Visible III, where your motto will quickly become, "How the heck do they expect me to do that?!"

Love it. Managed to get all the achievements so far, except the 2 Brutal ones. I'm guessing Immortal means running Gauntlet without dying, which I've almost gotten a number of times, and Undetectable.. not a clue!

Its an honor to finally get a JayIsGames review on one of my games! As far as the brutal achievements go, Immortal is going through gauntlet without dying, and undetectable is just as difficult, but in a different way. Its going through Gauntlet without getting detected by a detector trap (ie. Lasers, Turrets, Shock Orbs, Rockets). I'll probably post a guide on my site to the achievements. Enjoy!

When does a laser 'detect' you? As soon as you are nearby and visible, and it starts firing?

Also, any chance of you adding Kongregate API? It would be a great game for badges ;)

Got the immortal now. I'm not sure why I didn't get the Undetectable either, because I did not trigger anything, as far as I know!

Sorry for double posting, didn't see an edit button? Anyway, got the undetectable achievement now too. All done, yay!

It has Kongregate's API, but not all games with the API get badges. Badges have to be chosen by Greg on Kongregates staff. Contact him if you want badges ;)

Reload once and the loading bar just stops at 99. WTF?

Maqrkk
The laser has 3 "modes": off, detected, and firing.
Off - black. No lights.
Firing is obvious - there's a death ray coming out.
Detected - a red light will be blinking near the base. The laser knows you are near, but not close enough to fire.