From the makers of Egg Knights and Caravan Beast comes another real-time strategy RPG where it's all about unlocking those sweet, sweet heroes, not to mention upgrading your items, finding hidden secrets and coming up with the perfect duo to take on each level. Vault of Xenos, by Goody Gameworks, is about a magical land where heroes of old have been locked away in vaults. Thankfully, someone has found at least one key, and releasing your first Xenos you can start to slay this evil that has spread across the land and gain more keys to free the others. With nine heroes to unlock (eleven if you make an account with Armor Games and play on their site) and locked up items to give your heroes a boost, you'll have plenty of keys to find. In this defense game you'll make use of the many hotkeys (thought the mouse can do the job just as well) to move your heroes around the map to keep the bad guys from making it to their nefarious goal. Every hero has their unique abilities, and you can give them items which boost specific stats to help them out even further. There is a lot going on in each battlefield, both good and bad, so you'll have to keep an eye on everything to command your Xenos to victory. 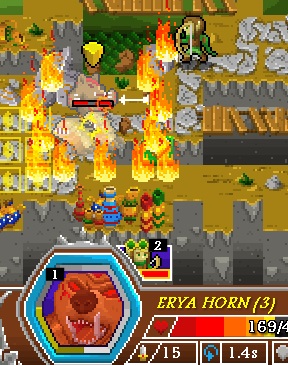 While the objective can change from level to level, the idea is simple... kill the bad guys before they escape off the screen or blow something up that you don't want to lose. But each map is set up so that even if the goals repeat, it's nothing that gets redundant. There are caves that release enemies, towers you can power up to summon a unit, and tiles that give magical buffs to your heroes when they stand on it. There are a lot of things in your favor that you'll need as these enemies are tough by themselves.... aaaaand your heroes may have something wrong with their hearing. You have three commands to control them with, attack with [A], stop with [S], and move with [D]. While the attack also acts like a move command they will stop along the way to attack anything within their reach. This is a good thing unless you have an enemy building nearby. They won't move until it's gone so if you need them to speedily pass by to get to a foe that's gaining too much ground, you'll have to use the move command. But the move command is tricky in itself as I've moved my units to the battlefield where they just watch one square away because apparently they are so obedient if I didn't tell them to dive right in they'll happily wait for the enemies to kill an ally and then reach them before lifting their weapons. You'll have to make sure you stay on top of them, which can be a little hard when things get crowded with units. Still, Vault of Xenos is another pride of Goody Gameworks, so waste no time in freeing the land and the heroes. Your first key awaits and all of those powerful warriors are getting pretty testy in those lonely vaults.

I played this for a while, it's fun but has a couple of issues:

- There seems to a memory leak or something. After playing a while the game will get very slow, and then eventually crash (at least in Firefox). Reloading the page will fix it. Sometimes it will actually fix itself and get faster again, but not usually.

- Difficulty level can be uneven. Certain levels get MUCH harder unexpectedly.

- Certain characters seem overpowered, some very underpowered. I have yet figured out if it's inherent to the character, or perhaps some characters are better suited to some enemies.