If you've ever said to yourself, "What I could really go for is an RPG adventure that sounds like it was written by Fozzie Bear," then Goody Gameworks' Egg Knight is the game for you, my friend. You play Kiev, a young boy who's transported over a thousand years into the past when he stumbles across a magic artifact, and discovers he's the "Prophet", chosen to lead the Egg Knights into battle against the Dark Army. Most of your time in game is spent in battle, directing your Egg Knights against whatever monsters are currently attacking you. When your Knight's attack bar fills up, you can click its portrait to attack whatever monster you're targeting. Each Egg Knight has a type that influences what it's strong or weak against... Wall types are weak against Siege, for example, and will deal less damage (and take more damage!) from Siege types. Kiev, as you level up, also earns special powers you can use in battle to help out, such as healing, though each one will need some cool down time between uses. Slay the monsters and you win, but if your party's hit points run out, it's game over. Outside of battle, you'll travel around the world from point to point on a map, completing quests and managing your party. Simple, right? 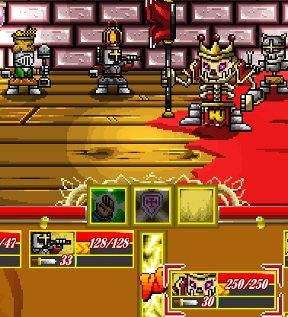 Perhaps too simple for some, especially given how grind-heavy the game is in terms of completing quests and leveling up, though this speeds up considerably once you start getting more party members with different class types. You'll spend a lot of time cramming food items for paltry EXP bonuses down your Knights' gullets, trundling back and forth between areas suping yourself up for boss battles. There's actually a bit of depth to the strategies here beneath the game's pun-tastic dialogue and awkwardly translated tutorial. Managing your party members so that they support and compliment one another is extremely important in most battles, ensuring characters who are weaker are safely behind the powerhouses, and choosing the proper time to use one of Kiev's Arcana abilities can make or break a fight. It's clear there was a massive amount of work put into this, and the effort apparent in the design and carefully constructed battles helps smooth out the rougher edges. The pixel artwork here is a great fit, and if you don't mind the goofy story, Egg Knight is well suited to the sort of relaxed, armchair gameplay to soak up an afternoon when you don't want anything drama-heavy or complicated.

Is there a list somewhere of what the talents do? It's really annoying being told after it's too late to change.

Ones I've used so far:

Here are the talents that I found.

Got a sword and shield after the first or second quest but what kind of knight can equip them? Not the baker or miner I'm guessing.

@sparkle when your egg knight reach level 5/10/15, they can get one equipment slot, which is the question mark in the knight page, and you can equip the equipment by click on the equipment and then press equip.
(the sword and shield are equipment)

I like this game alot, BUT once resfreshed the page and my save was gone.. If you play it once and you nearly finished all the story you will understand why I am extremly annoyed by this !

I like the gameplay, although the (!) signs at every stat are a bit annoying I believe it's accedenaly.

It's fun to "train" your "egg knights" and equip them various stuff..

Has a lot of potential in my opinion but still got a long way to go.