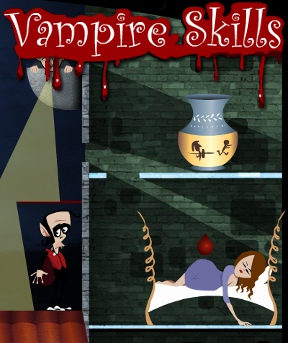 Aah, to be young again. To experience the thrills of the imagination. To not pay income taxes. To prowl about the night hypnotizing people, utilizing my super strength powers, flying like a bat, and unleashing telekinetic powers that can do virtually anything I desire. While that may not exactly be the childhood of anyone reading this review (or writing it, for that matter), in the point-and-click puzzle game Vampire Skills, you take on the role of a young vampire (is that even possible?) learning to use his skills. And yes, it's about as whimsical as it sounds!

Click a power from the inventory bar at the bottom, then click its opaque icon when it flies to the active part of the screen. Your powers can do everything from invisibility to super strength, charming the ladies, resurrecting yourself, even hypnotizing hapless guards into banging themselves in the face with an axe.

Puzzles are largely order-based, so all you have to do is determine which available powers to use to reach the target at the end, then click everything in the right order. Pesky piece of garlic in the way? Try using your telekinetic powers. You can experiment, and the game won't let you make fatal mistakes, so you can experience some genuine worry-free fun.

The visuals vary in quality, as some areas and animations look smooth and professional, while others appear rushed and stilted. It's easy to overlook, though, as the game's tongue-in-cheek setting cultivates a forgiving player.

Vampire Skills is a unique sort of point-and-click game, and despite its short length, trial-based gameplay, and relatively low level of difficulty, it's charming enough and captivating enough to pull you through to the end.

Congratulations! You have graduated from Vampire School! Put on your cap and receive your diploma.

Admittedly, I just clicked through every ability and it worked each level. Not very sporting, but those timers always make me feel rushed :\ It's a shame, because the concept is clever.

I kinda thought that the school would be just a tutorial that led to harder levels. I didn't expect it to be, y'know, the whole game.

And I only read the review afterwards heheh.

It's more of a tutorial than a game isn't it?

I don't know much about how game design works but a lot of designers seem to do the hard work in setting up the game mechanics and then abandon the project without creating much in the way of levels to show them off.

Here's hoping for a sequel that just starts where this game left off (kinda like what Liquid Measure 2: Dark Fluids did), because this felt like a good intro to what could be a very fun series.

The one easter egg with the

Bat ability, in the level with the fisherman,

was quite amusing, though. XD

Congratulations! You have graduated from Vampire School! Put on your cap and receive your diploma.