Look, I'm all about the sisterhood and female empowerment, but there are some chicks I just can't stand behind in solidarity. I mean, right around the time you earn the moniker of "most prolific female serial killer in history" is probably when I stop throwing up the horns to support you. O2D takes on what might be Hugary's most notorious historical figure with Vampire Legends: The Untold Story of Elizabeth Bathory, a hidden-object adventure where you, a gypsy woman, have been hired to find a young girl named Agnes. She was invited to stay with the Countess Bathory, along with a bunch of other young women, which totally isn't suspicious at all, and even though they've all been missing for months, the king is too busy with the war to concern himself with their disappearances. You know what they say. All that is required for evil to triumph is for nobody to think it's that weird to send their daughters off to stay with the sinister bourgeois. Using your ability to mix helpful potions that can give you an edge and psychic impressions, you must discover the truth behind the Countess and the disappearances, but it's pretty clear that despite a mysterious benefactor, something sinister it happening. As you play and solve puzzles, you'll gather herbs and ingredients for various potions, and the hidden-object scenes will have you track items down in various ways. Hopefully you haven't bitten off more than you can chew... ha! I slay me. HA! Get it? Slay? Vampire? I'm here all week, folks. 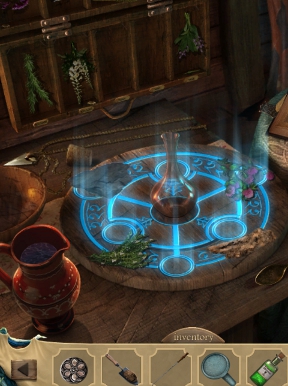 Surprisingly, The Untold Story of Elizabeth Bathory is one seriously bloody game. Corpses pile up left and right, literal bathtubs of blood are found... it's actually weirdly refreshing considering how rarely casual adventure games are willing to toss the red stuff around, but it feels appropriate here given the source material and subject matter. While the voice acting is hit and miss, the story that unfolds is actually fairly compelling, providing a few twists on the well-known historical tale and bringing a great sense of cinematic camp to it all. The potion mixing is a nice touch, while the psychic visions add a macabre flair. The downside is that in a lot of ways, the game feels very rough around the edges. A lot of the visuals look grainy, the interface can be clunky and sluggish, and it's also glitchy in a strange way... some items you gather won't stay gathered, forcing you to go back and pick them up again when you actually need them. It's not game breaking, it's just weird and honestly, a little disappointing, since it means the game probably could have used a bit more polish.

Still, for fans of vampire stories that are more ghastly than romantic, Vampire Legends: The Untold Story of Elizabeth Bathory definitely fits the bill. It's a meaty game with a lot of content in the main game, and a satisfying amount and variety of puzzles, which sort of makes up for the overly simplistic and repetitive scrambled pictures that make up solving psychic visions. The atmosphere is tense and moody, though never actually scary, and there are enough twists to the story to keep you guessing throughout rather than just falling back on "Elizabeth Bathory. How messed up was she?" Fans of iconic vampire legends and grisly tales will want to check out the demo, and if you can overlook its rough edges (or wait for the Standard Edition), this is an appealingly gruesome casual adventure with just enough bite to it.