In 2010, Lucidrine's Valthirian Arc was an addictive but ultimately simplistic and repetitive action RPG sim game with a great premise... you were in charge of an academy that trained students and sent them off on missions throughout the land at the behest of the king. That is literally everything I have ever wanted and believed I was qualified to do, and yet President Obama still keeps ignoring my e-mails and petitions. (What about our slime monster problem, Mr President?! What about our lack of battlemages?!) Three years later, Valthirian Arc 2 has shown up unexpectedly, and though it keeps the original's premise intact, it also improves on it in almost every possible way, if not quite able to shake the repetitive grinding and simple gameplay entirely. 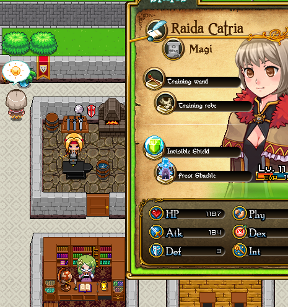 As before, your goal as principal of your new academy, is to attract and train students over weeks, months, and years into a variety of fantasy classes by not only sending them on missions, but also managing and growing the school itself. Eve, your green-haired assistant, will explain everything, while stern Jeanne is who you'll visit to undertake quests. Errand quests are simple affairs where you simply pick the most qualified student for the job and send them off for a while, allowing you to continue to manage the school as usual while they're gone. For combat missions, you'll select your party of students (making sure not to send anyone too inexperienced!) and embark on an action-RPG sequence where you direct them around the field and they automatically attack anything within range. Provided you survive and win, you'll gain gold and experience, and just as important, fame, which influences how large you can build your facility. You'll also find exploration quests, which ask you to find a specific location on a map, and item quests, where you hunt down the required number of items in the level. And, yes, we have escort quests (I hope you read that line with the most loathing possible) because we're apparently still pretending someone likes those.

The academy itself is where some of the most important stuff happens, from building new rooms that confer different bonuses, to purchasing new weapons and armor, hire mentors to teach your students, and much, much more. Your students will wander the academy freely, and can earn both EXP and skill bonuses as they visit rooms and interact with mentors. When they reach level 11, they're ready to graduate, which grants fame, but if you really want a lot of that, you'll wait until they're both at a higher level and have a class applied to them, which grants unique abilities. Not all students are created equal, of course. Some may have certain qualities that help or hinder them, while others might simply be more powerful. Just don't forget to outfit them with the proper equipment at the armory! 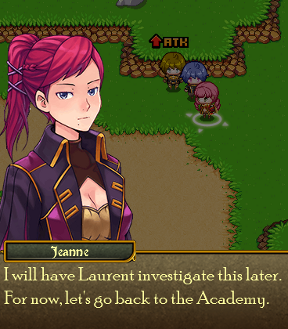 In a lot of ways, Valthirian Arc 2 basically feels like a Kairosoft game, with a bit of Final Fantasy Tactics Advance-style mission management stirred in. It's the sort of game that takes a while to really get going since you have so few options in the beginning, and you'll need to grind a lot of gold to get the upgrades you need to proceed. It does unfortunately still feel like it doesn't play as smoothly as it could, since both combat and missions are still simplistic, and the lack of any sort of fast-forward button means you'll spend a lot of time staring at the screen early on waiting for missions to complete. Since you don't know what a combat mission will contain until you try it, there's no real strategy to preparing it, and the lion's share of battles just consist of your characters wildly swatting at clouds of enemies doing the same thing. If you've ever watched a toddler smack a pair of action figures together going UNF UNF UNF, you know what to expect with Valthirian Arc 2, though as the game progresses and more missions and classes unlock you'll find the difficulty does go up.

That being said, however, Valthirian Arc 2 is a gorgeous, gorgeous little charmer of a game, and the clear effort put into improving it over its predecessor is nothing short of remarkable. Lucidrine has always done quality work, but Valthirian Arc 2 might be their most beautiful and colourful to date, with an amazingly professional look and feel. This game easily could have sold for $40.00-$50.00 on the Gameboy Advance just a few years back, and to be able to play it free still sort of boggles my mind a little. The story is on the scant side, mostly relegated to a few characters popping up now and again to trade a few lines for certain quest tracks, but it adds more personality than the series had before. Gameplay is simple, sure, but it's also casually engaging and addictive, with a lot of secrets to find and things to unlock. Though its combat and general gameplay might not have enough complexity or strategy for some, Valthirian Arc 2 is still an effortlessly charming little game its talented team should be proud of.

As a warning, the game seems to stick if you send people on the Bear Hunt quest.

It sticks when going to Herb Gathering too :/

I'm having trouble sending ANYONE on an errand quest. I can see the quest description, but there's no button I can find to select the student(s) to send. It also quickly starts to lag and slow down. Fun while it lasts though.

For the record, VA2 is known to randomly freeze on the loading screen of ANY quest. Errands, though, don't count.

It's a shame. Were the freezing not a game-breaking flaw, we'd have a decent game here.

I have not experienced any freezing whatsoever. Please make sure your flash and browser are updated, and of course disable any harmful adblock programs.

Nope. Herb Gathering froze up for me. XP/FF. Then I restarted, went to bed, updated Flash.

I just played ten missions successfully, and it's hung up on Herb Gathering. The little figures are sped up comically in the loading screen, which means it's a game issue, because a Flash crash would freeze everything.

Yeah it's a game issue, all my stuff's updated and I have adblock off for this site. And I also noted it really started to lag in places.

Considering several people with different configurations are having the same issues, it's something in the game's backend that's causing it.

I have a problem i can't play the game anymore. I played for 1 hour and then closed the game. Now i tried to play again but now it just shows me a white screen.

I can play it on other sites but on playwire it doesn't work anymore. Someone here have the same issues and can tell me how to solve it ?

You guys are right, my apologies. Dev is working on a fix. :)

Game has been updated to the latest version with load screen fixes!

Is there a way to end this game?

Do the mood bubbles mean anything?

And the students seem to max out at

This saves a ton of gold if you have an alpha team, then only buy the top weapons and armor for them.

But the loading screen for quests sometimes freezes my Google Chrome for a few seconds.

Anyway, I'm having a ton of trouble beating the slightly overpowered

Hector, who deals massive melee damage and does that thing that scholarsages do but hurts much more.

I tried a balanced team comp but they got wrecked. I tried three gunners and a healer and ran away from him at every opportunity, and they took a bit longer to get wrecked.

It seems the problem is that I can't get everyone to run away at the same time. I can only move one guy at a time, and after I drop control over them they run towards Hector's fireballs of death.

So if someone could help me with that, that'd be greeeeaaat.

To Cat Man: yeah i had a hard time with that too.

There may be better ways but here is how I managed to beat Hector. I used 1 Paladin, 1 Healer and 2 Gunners. All were level 30, with the best equipment and so-so stats.

Use the paladin to tank, making sure that the others are out of collateral damage range. If they are move them away. Spam the 2 gunners ultimate skill but save the healer's ultimate for when hector does his meteor skill.

Do not use the paladin's ultimate as it just makes the paladin take too much damage. When hector is about to die, he will cast some spell with massive damage. This is marked by a red circle. Move out of this area or your whole team will get killed.

If you want to quickly train up a new character, you can use academy points (I dunno what rlse they can be used for)

Ah yes, that helped a lot! Thanks. But the system couldn't hold up because I couldn't react fast enough to get all four away from

the red circle of death. It didn't help that Hector could freeze my people.

But I managed to get away with winning because

Eventually, my healers got caught and so my paladin couldn't be sustained. All that was left was my gunner. Fortunately, my gunner is Intuitive and has high dex, so she was able to outrun him. For a while, I just kited him, but I still wound up taking damage because eventually I would have to turn corners.

So I caught him along the right edge of one of the mini-walls on the upper side of the room by leading him into it, and I stood next to the wall, just in range to shoot him. He apparently didn't know there was a wall in front of him. So he just kept running into the side of the wall while I shot him to death. GG

So now I realize, it could be possible for a gunner to solo this mission. :O

And to think, I was going to ragequit.

With premium rescruitment, the probabilities for getting the different student tiers are:

(those numbers are calculated from the observation of 342 recruitments and should be quite precise. Actual probabilties of green and blue might be +/- 3% and for Gold +/- 0.3%)

I have found that if you

double-click on the ground away from Hector, it will force the team to break attack and move to the destination you clicked and away from the insta-kill AoE attack.