An invitation to hang out at a creepy derelict factory sounds like a one-way ticket to Murder Town, but for you it's nothing out of the ordinary since you've been called yet again to photograph the graffiti art of your friend "Stinger". Of course, when you show up and he's nowhere to be found, that should probably set off a few red flags and have you running for the hills... but then we wouldn't have the basis for URBEX, Psionic's moody-broody point-and-click horror adventure, and that would be no fun at all. You might not have brought much with you apart from your trusty camera, but hey, it's not like anything will go horribly, horribly wrong and you'll be forced to run for your life, right? 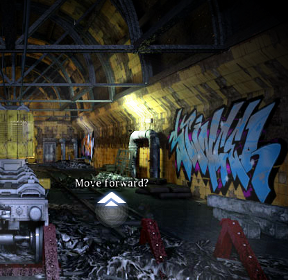 Click to interact or move around, and moving your cursor to the top of the screen causes your inventory to drop down. Be warned that although it doesn't occur anywhere else, a certain pair of objects in the third chapter have contextual mouse movement, forcing you to click and drag to move them around. The game is broken up into chapters, and will save your progress at the start of each one, so if you fail or, uh, die, you'll be booted back to the start of the last one.

Since the game is divided up into chapters, it does a good job of continually moving you forward with a series of self-contained puzzles instead of having you back-track in circles, wondering what you missed. This also means, however, that the game just isn't that difficult, and it's hard to escape the feeling that you're strictly on rails rather than actually adventuring. It doesn't help that a lot of the challenge that is there is due to some awkward time escape sequences and hunting down interactive zones that aren't well represented visually. Fortunately, the atmosphere and oppressive design is so top-notch it draws you in almost immediately, and the secret areas, documents, and other collectibles provide incentive to explore and replay. Despite some rough patches in design, URBEX is a creepy adventure with a satisfying length and campy storyline that makes for an enjoyable experience.

Chapter 5 - Get Out of Here

Are you in the sewer? Then:

That last gate has two latches, look at the lower left and right of the gate. You need to open those latches by clicking and dragging them up. Once both latches are up, you can click on the middle bottom of the gate to lift it and go forward.

Chapter 5 - Get Out of Here

Awesome game, really. Not what I expected based on the review. Good storytelling to build up the mystery, superb graphics, and I liked having the separate chapters -- don't see that in escape games too much. Most puzzles were easy but the timed challenges added some difficulty which was enjoyable. And now that I think of it, the simplicity of the puzzles was referenced in the game ;-) Unfortunately for me I didn't realize

you could click on the word "ITEMS" until about 45 minutes in...I kept wondering why the docs,tapes, etc, were disappearing! duh.

I will definitely be playing again!

Very creepy. Just realized that the hard to hear voices were probably

Also, did anyone else happen to look at the pictures your camera took after you dropped it in the fall? Creepy stuff.

On one hand, they are pretty much the same game with a different wrapper. Also, despite missing items throughout the game, I never have the impetus to go back and find the missing stuff - maybe the game is too long, idk.

On the other hand, the styling and graphics are superb, as are the sounds and voices. A lot of time and love is poured into these games, and you can tell. In addition, the find-your-way-out-in-the-dark bit was new and added some variety.

Fun game, but I'd be interested in what Psionic could do outside of the "evil lab experiment gone wrong" story line.

Both the walkthrough & by extension I seem to be missing the 4th secret location. It says where to find

the one in the sewer & the two in the lab,

but that still leaves one unaccounted for.

the timing of the green button was difficult- I had to die twice before I even noticed it, I was so focused on the creepy-ass bug running towards me

Take a look around in the train control room.

The code for the glyphlock isnt working.

Same problem as Brittny - found three possible codes, none works.
Tried the one mentioned in the walkthrough (which was the first I tried anyway) - to no avail.

I'm with elleClicks and neo1973. Gameplay-wise it's fairly simplistic. (Go play Morningstar instead, I suppose.) But you can just tell this developer enjoys doing this. Those little creepy details make for a full-bodied narrative. I especially like how they go all out on the five senses -- my machine prevents me from enjoying the audio, however the smell-o-vision is quite effective.

Nice to start an escape game with a screwdriver and a crowbar for once :)

Two things that really bothered me about this game and spoilt my enjoyment of it somewhat:

1. Why the hell do I still care about taking pictures of graffiti but never bother to take any of all the crazy stuff I find?

especially after finding stinger dead! And on that note, how did I know straight away it was stinger? Am I very familliar with his bone structure?

Why the hell did anyone think that giant insects would be a good thing to feed the world on? Let alone the fact that they have to eat human flesh, surely some sort of giant vat cow with no legs that ate dirt would be better. I know it's just a story, but the fact that it was so rediculous just made it comical to me.

@ Chris
1. That is indeed a good question, because a lot of really interesting stuff is happening. Specially, it would be interesting to try to take a photo of the "things" or at least blind them with the camera's flash.
Maybe the main character is in such a state of disarray that taking pictures of the graffiti is his way to maintain sanity...
... from a developer's POV, I suppose that since the photos are linked to the graffiti recognition (by extension, the final score), they aren't that big of a deal.

About Stinger, have you considered the amount of empty spray paint cans surrounding the skeleton? Hard to not associate with Stinger, in my opinion

Insects are a rich source of protein and minerals, and several cultures around the Earth do eat them as part of their main diet. The part where they had to feed them corpses is somewhat sketchy, but I believe that to feed those thousands of "things" inconspicuously you couldn't just buy tens of thousands of cows or whatever, since that would bring about too much attention.
... still, if you need to feed them... yup, kinda iffy.

Nonetheless, I passed a good 60 minutes playing this game, having uncovered all but 2 or 3 things. Kudos.