Ever since "Chariots of the Gods" (and even before) folks have wondered how ancient peoples could have built the things they did. Pyramids, temples, fantastic cities out of stone... did ancient man have help, perhaps from above? That is the question posited by Unsolved Mystery Club: Ancient Astronauts, the fantastic new adventure/hidden object hybrid from Freeze Tag Games. Is that question answered? You'll have to play to find out. 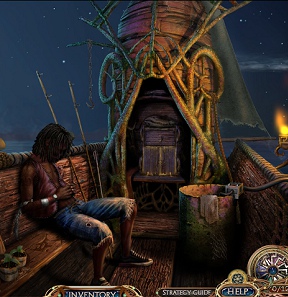 The action begins with a stunning, swooping tour of the solar system and ending at a mysterious warehouse in the middle of the desert, perhaps even area 51 itself. As a mystery club adventurer you have been called in to help locate your fellow clubbers, each of whom has disappeared whilst checking out rumors of ancient peoples getting their hands on alien technology. These folks are scattered around the globe and travel you must from Mali to Palenque, from Egypt to Peru and even to remotest Antarctica to discover who or what is kidnapping the researchers. Unearth what each of these adventurers have found and attempt to rescue them while trying to uncover a dastardly plan to...well, you'll figure it out in the end.

Exploration is accomplished with the usual changing cursor, an eye for areas to examine, a hand for items to pick up or manipulate, and a spinning globe/arrow combination highlighting areas to travel to. Each country is a self-contained chapter; a place to wander around, interact with the natives, and try to discover the whereabouts of your friends. At the end of each mission you will return to the mysterious warehouse, ready to set out again until you have found everyone and reconstructed a mysterious artifact. Unsolved Mystery Club: Ancient Astronauts also features an extensive inventory (necessary, as you will be picking up a lot of stuff), a refilling hint feature (which can point out items in hidden object scenes and give hints in adventure scenes), and a digital "notebook" which stores information, clues, and mini-animations of information as you discover them. The collector's edition also features a very handy strategy guide. 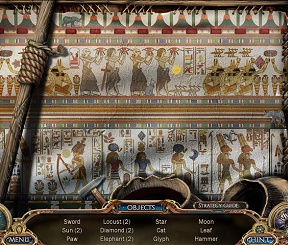 Along the way you will find basic hidden object scenes, mini-games, and a lot of puzzles to solve as you strive to uncover the secrets of ancient peoples and their possible link to alien technology. Unsolved Mystery Club: Ancient Astronauts has a nice mix of all three elements of the traditional hybrid as well as a lot of information about the history of the places you are visiting, although that information is a blend of the real (who knew that Nazi Germany laid claim to part of Antarctica? Am I the only one who didn't know?) and the fanciful (Are the Nazca lines really runways? If you've ever seen them close up you'd know the answer is: doubtful.). Let yourself be drawn in by the intriguing mystery and enjoy the ride to the end.

Analysis: Unsolved Mystery Club: Ancient Astronauts is an artful blend of real historical fact and fantastic UFO speculation, perfect for the adventure/hidden object hybrid genre. One of the strongest features of the game is the storytelling you encounter along the way, leading to the explosive final denouement, definitely worth the time and effort to discover.

The backgrounds are stunning, hand-painted scenes that echo both the location and the time of day the adventure takes place. Mali is dark and mysterious, Egypt bright and sun-washed, Palenque suitably lush and overgrown, etc. A great deal of attention has been paid to the "feel" of each mini-adventure, from the artwork to the music, which also evokes the time and place with African rhythms, plaintive South American flutes and the like. Each piece of music being specifically tailored to that particular location (along with appropriate incidental sounds) certainly amps up the atmosphere to an astonishing degree. Even the hidden object scenes carry the theme with items that (for the most part) belong to each particular place. As for the gameplay, Unsolved Mystery Club: Ancient Astronauts shows a lot of thought and effort behind each adventure. The hidden object scenes can be very tough due to the tricky placement of hand-painted objects on hand-painted backgrounds, the mini-games are a mix of the usual suspects (sliders, Simon puzzles, and the like) which get tougher as you go along, and the use of found objects can be pretty tricky as well. There's a lot of interaction with the surrounding scenery and items that can be found within. 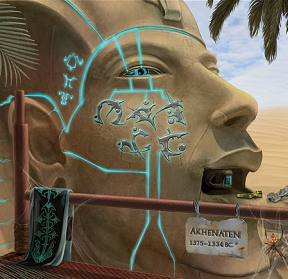 Perhaps the best thing about Unsolved Mystery Club: Ancient Astronauts is the variety of hand-holding available within the game. The hint system is on a timer that refills very slowly in easy mode, and excruciatingly slowly in advanced mode. There are no glints or sparkles to point your way to interesting areas, you'll have to sweep with that changing cursor to find hidden (or not-so-hidden) items. Small showers of sparks do exist to highlight hidden object scenes, but they don't generally appear right away, they often have to be triggered by another action, such as solving a puzzle, before they deign to point out where to find more objects. The hint timer itself is a work of art in that it allows you to specifically choose which objective you'd like a clue for, rather than just randomly highlighting an area. With the mix of modes, the slow refilling hint timer (and puzzle skip timer), and the ability to ignore the opening tutorial, Unsolved Mystery Club: Ancient Astronauts can be quite a challenge for the advanced gamer while still being easy enough for the beginner.

The only downside is that the animations and voice acting can get a little cheesy in places, which is easy to ignore. The gameplay itself is longer than your average adventure hybrid (you'll probably get a good four hours of play even without the "bonus" adventure) and as a plus the "extra" adventure in the Collector's Edition is truly a side-quest, not a more complete ending to the saga. With its fantastic visuals and engrossing story Unsolved Mystery Club: Ancient Astronauts is not to be missed, even if you are more skeptical than Scully about the whole aliens-interacting-with-ancient-peoples thing.