Undertale is a narrative RPG game currently in the works by Toby Fox. A demo has been released featuring 30-45 minutes of gameplay, and because it's such a unique experience, we couldn't wait to share it. Undertale is the story of a human girl who falls into the monster-controlled underworld where she encounters napping ghosts, mobile vegetables, malevolent flowers and a butterscotch pie. It's a little slice of Anodyne or Earthbound told through simple visuals and charming characters, and after playing the preview you won't be able to wait for the full version. 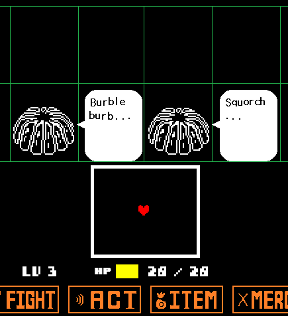 By and large, Undertale plays like any other indie RPG. You walk through the world, interact with characters, engage in battles and earn experience points. But two things make Undertale stand well above the crowd: combat and characters. Battles are turn-based and use both standard fight/flee commands along with a curious "act" feature. Choosing act opens up an enemy specific menu that allows you to interact with each creature on a more personal level. Maybe it lets you talk to frogs. Maybe it lets you imitate molds. Or maybe it lets you cheer on a down-and-out ghost. Either way you can win many battles using these actions alone, and their inclusion deepens the narrative elements that much further.

The full version of Undertale isn't out just yet, but after playing the demo you'll want to sit on the official site hitting "refresh" until it is. It manages to touch some emotional threads most players will easily resonate with all while maintaining a quirky sense of humor. Phenomenal work!

Cheers to Jacob for sending this in!

While it's understandable, the character is actually gender ambiguous. They could be male or female, and that's left to the player's imagination.

Otherwise, just about a perfect preview without spoiling much, and absolutely true about how it can make an impact. I've never had a game demo hit me that hard.

And I went full pacifist run the first time through. It still hits hard, just in a different way.

I say, this Undertale game hits where it counts, huh?

The first time I played the game through, I defeated Toriel. I wasn't exactly at my happiest at that point as she's basically a motherly figure to you, almost a wifely figure if you're old and monstrous enough, tee hee :3

So I reloaded my save -- knowing not the nature of saving in Undertale -- and battled Toriel once more, only figuring to use the Spare command instead of fighting. Lo and behold, I took on Toriel's barrage of attacks until I was in critical condition. By then, Toriel's attacks were avoiding me; Toriel didn't want me to die.

Toriel is probably my favourite part of this game, which makes it that much more painful when you choose to fight to the end instead of sparing her life. Doing so in the next save file is made that much more poignant when you realize that you remember your previous saves in-game. That final hug before Toriel bids you farewell almost broke me into tears, I almost wish I could have remained by her side. Yet it's not possible.

I just played through the Undertale demo.

I wanted to spare Toriel. I really did. But I accidentally hit her too hard... I didn't even know I was capable of doing that much damage in one hit.

It's not always possible to do the right thing, I guess.

Keep sparing her. Keep doing it, even if it doesn't seem to be doing anything. It will eventually.

Well, I played it.

First time I played, I killed Toriel on accident. I decided to replay to make sure I save her, but... I accidentally killed her again... The flower made sure to... Remind me...
I'm not sure if it was there before, but if you killed Toriel, you should get a note from Flowey in the Instructions.
I don't know what to say.

After playing it multiple times,

I noticed Flowey gets more and more mad every time I meet him in the introduction of the game. First time, he acted like it was the first time (perhaps it was from all perspectives), but he said something different on my second playthrough (don't remember) and on the third, he said "Don't you have anything better to do?"