Twilight Phenomena: The Lodgers of House 13

Hey. You know what an awesome idea is? Signing a lease agreement for renting a room on a whim, without ever seeing the room or discussing the terms, after a three second discussion with the landlord, based solely on your dream of "always living in a nice mansion". And this one even comes with its own monkey fixation and murderous secrets. Hooray! In Twilight Phenomena: The Lodgers of House 13, the latest adventure game from ERS Game Studios, your whimsical change of addresses takes a turn for the bizarre, when a frantic girl pounding on your window and pleading for help is abducted by... a giant angry monkey. Because of course. It soon turns out you can't leave this strange place, and since the previous tenants have quite literally lost their heads, you'll have to solve the mystery if you want to stay alive. 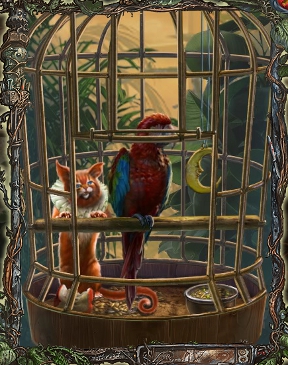 Luckily for you, prison though it may be the house is full of useful items you can use to get past obstacles if you're clever. Early on, you'll even gain access to an exceptionally creepy holographic cat that can be used to help you with certain obstacles and greater increase your certainty that you're actually laid up in the hospital suffering some serious hallucinations. House 13, located at 13 Darwin Lane naturally, turns out to be hiding some weird stuff. Like, really weird. Like, giant man-monkey wearing pants weird. And that's just the tip of the iceberg. Turns out there's a fine line between genius and madness, and since you're currently trapped in a house packed full of some of the most unnecessarily elaborate puzzles known to locksmithing, it seems like you're getting a taste of both. There are sassy parrots to terrorize, champagne to be wasted, damsels in distress, and a whole lot more. Hm. Guess you should have read that lease agreement a bit more carefully, huh hero? 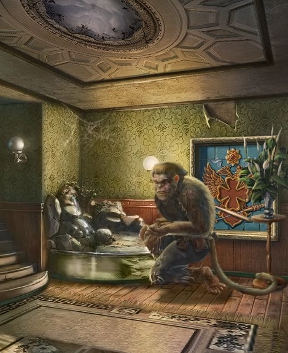 Analysis: The Lodgers of House 13 is one of those games where you can feel your eyebrows climbing higher and higher into your hairline the longer you play. ERS, why you ackin' so cray-cray? I mean... the sheer strangness on display here isn't necessarily a bad thing. As events begin to unfold and only add new layers of madness to the story, you want to keep playing, both to find out what's going on, and what weirdness the game will throw at you next. Since the title is a straight-up adventure game with nary a hidden-object scene to be found, that happens exceptionally quickly. Everything proceeds at a fast pace, and the puzzles fly at you thick and fast. It's a lot of fun, even if it rarely makes any sense. I mean, come on, we're talking about a game that includes the line "Every three days, a monkey comes and feeds me a strange solution". Clearly Captain Logic is not steering this tugboat. It's over-the-top in the schlocky way a direct-to-TV movie you would expect to see shown on a local cable channel at midnight is, and, in its own way, just as enjoyable. The visuals here aren't quite as crisp as we've come to expect from ERS, but the imaginative design more than makes up for it.

The downside is that the gameplay itself doesn't necessarily stand out in any way. Apart from a few frustrating puzzles, everything is sort of playing it safe. You'll find items by the bucketload, but most of them are so bizarre that they'll only ever have one clear use, so you won't be stymied for long, even when you're forced to do some backtracking. In fact, your biggest challenge might be remembering that your fancy holographic cat is often the solution to problems. The end result is a game that continually delights fans of cheesy sci-fi horror that feels somewhat encumbered by unimaginative gameplay. It's a great choice for an evening when you want a good four or more hours of sublimely strange story and don't mind not feeling particularly challenged. What would turn genius to madness? What fate befalls those stupid enough to mess with man-sized monkeys? What horror lurks in the house at 13 Darwin Lane... and where did it get those pants?!