Please note that this game received its rating of R for scenes of extreme blood and gore and horror, allusions to child abuse, and suicide.

With a few exceptions, nobody really expects a hidden-object adventure game to be actually scary, but Goblinz aims to change all that and see if they can't keep you up all night with True Fear: Forsaken Souls. As the game begins, its unfortunate star Holly Stonehouse, is having one heckuva nightmare about a bloody massacre in an asylum. At first, she's glad for the pounding at her door that wakes her up from it, because Holly is an idiot and doesn't understand foreshadowing and story progression. The man at her door delivers a letter from her estranged sister Heather, who tells Holly it's finally time to "know the truth" about both of them... and their long dead mother, because that isn't a red flag. It feels like it was intended originally as a straight-up point-and-click game since the hidden-object scenes use a different art style from the rest of the game and seem shoehorned in, in addition to having a few odd and frustrating word choices. Since when does "cell" mean "birdcage"?! The actual gameplay itself, however, is very well designed if not wildly original... you'll have a map you can use to travel anywhere with a click, a journal that will keep you up to date on everything, and, of course, every girl's must-have accessory... a demonic doll that breathes a sinister red mist to highlight hints. It matches my highlights and my new shoes! 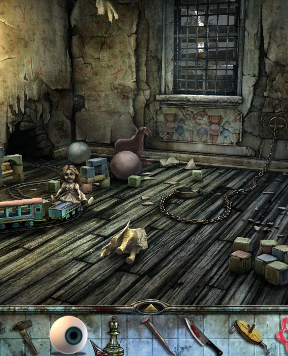 As a nice addition, you can also find collectible figurines of characters from the game that add a lot of backstory. The game's pace is deliberately slow, dedicating to establishing its genuinely unsettling atmosphere, and surprisingly does a good job of making you feel truly menaced and in danger. There are jump scares, sure, but there are also some absolutely stellar uses of subtle imagery and visual tricks that will make your skin crawl, such as forcing you to turn on the light when you think you know what's standing in front of you in a darkened room. There are a lot of animated cutscenes that add to the story and the tension, helping to keep you glued to your seat the whole way through. The story has a lot more twists and turns than you'd think, and a lot of shocking, well-executed moments. Compared to Mystery Valley, the developer's last game, True Fear: Forsaken Souls is a much better well-designed, smart, and altogether stronger achievement. Admittedly, it still feels like it needed some extra polish, since some gameplay elements are little clunky, and aspects of the presentation, such as the text or the awkward character model used for Holly, look a little rough around the edges. 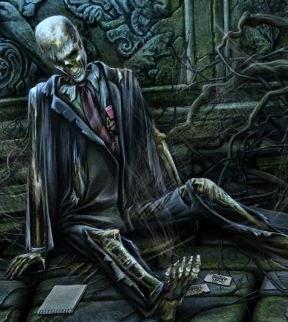 It's also a long freaking game for the genre too, stuffed to the gills with puzzles of all kinds... some, unfortunately, repeated more than once. The whole thing is a bit on the easy side as your journal doesn't keep track of "clues" the way it claims so much as it does actual solutions in the most obvious fashion possible. We're all big kids, Forsaken Souls, we dressed ourselves this morning and everything... we can handle a little deduction. But I guess not everyone can be Mystery Case Files: Dire Grove. Still, True Fear: Forsaken Souls has a lot going for it, including its ability to poke fun at itself, such as the books on a shelf that mock the elaborate, ridiculous nature of the locks you find yourself stymied by. "Emblem Locked Doors: Really?" But most importantly, True Fear: Forsaken Souls is a genuinely frightening, engrossing, and engaging hidden-object adventure that begs to be played with the lights off and the sound up. By turns cheesy and melodramatic? Sure. But also fun, scary, and wonderfully weird, and thus well worth a look.

I just wanted to say as a regular HOG player and adventure game aficionado, this game absolutely blew most others out of the water. For once there is a non corny but entertaining and scary storyline that has captured my full attention. The art is well done and perfect for the genre. The use of the Art Nouveau design for the mental ward is but one of the brilliant artistic decisions. The music is haunting, creepy and not overwhelming. It captures each scene perfectly. The voice actors( actress) are excellent, no off sounding actors pretending bad accents. It is not a game for people who don't like an engrossing complex storyline but for people like me it is a dream come true. I too love both Dire Grove and all Mystery Case files games but it is cool to see a worthy contender with the guts to go their own way with a very addictive and immensely clever game. I am only annoyed I must wait until Fall 2014 for the next chapter, arggg! At least the third part of the Witches Prison should be out soon, I hope? Just wanted to chime in as I love this game and am hoping developers quit with the foofy characters and badly written storylines. Love your site as well,!! Sarah Tee.

One of the best I've ever played. Spine-tingling, with the creepy turned up way up!