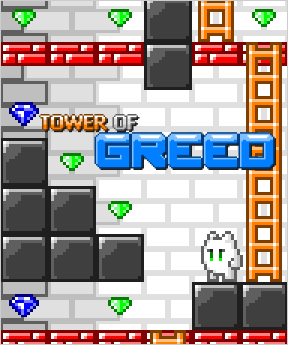 I love when the theme is right there in the title. Tower of Greed, by Epic Shadow, is a game about the banker's favorite deadly sin, in the form of an aggressively retro, fast-moving platformer. You'll need agile fingers for this one, and a realistic attitude about your own compulsions. Will you exit the tower with untold riches? Or will you be betrayed by your own stinking avarice? Let's find out!

Our hero for this adventure is a white blobby flavorless fellow with charming green vertical eye-slits and various nubs that represent arms, legs, and possibly ears. Control him with the keyboard; there are configurations available for both lefties and righties. He runs, jumps, and climbs ladders with the best of 'em.

The Tower of Greed, an endless spire full of ladders, spikes, crumbling platforms and other exciting business, scrolls downward at a constant rate, always forcing new obstacles upon you. You die if and only if the bottom of the screen overtakes you.

Your mission is to collect as much treasure as possible, and then escape (press [up] or [jump]) alive through one of the periodic exit doors. That last part—the escaping—is more important than you think. If you don't use one of those exits, if you perish to the Nothing, then your collection of riches gets wiped from memory like you never had it. No high score, no bragging rights, no peck on the cheek, no enchilada. It's similar to the soul-crushing hi-jinks of Survivor 115, if you remember that one.

What's worse, and you're going to want to sit down for this, and I'm not sure why you would be reading this while standing, but sit down anyway, is that you also lose your achievements when you die.

Yaar. That be what I said, matey. Because they're not actually achievements, you see, but trophies, and you have to physically take them out of the tower through an exit if you want to keep them. If you die, then bye-bye cute little achievements! Bye-bye sweety darlings! I'll try to earn you again next time! Right after I murder some game designers!

There are two main modes available. Arcade mode is the brutal one, where with every door, you have to decide whether you want to quit the game and take your winnings, or continue on and possibly lose everything. Big bucks! Big money! No Whammies! No Whammies! Survival Mode gives you more breathing room, by letting you bank your money and trophies when you reach a door and still keep playing. Less hardcore, but also less likely to cause an aneurysm. 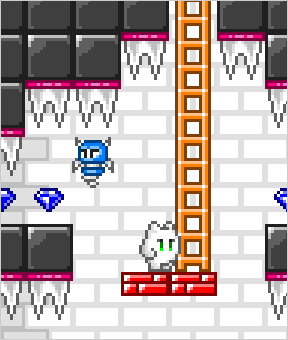 Analysis: All things considered, it's a good thing that Tower of Greed moves so very quickly. If you lose your progress, and you will, it doesn't take long to jump back in and make some more. The tower's "levels" are randomly selected, so it's never exactly the same game twice.

The level design is mostly simple and workable, with two or three different paths available at any given time, so you are almost always within arm's reach of safety. The dead ends and risky jumps are all gem-laden optional areas, designed to take advantage of your dot dot dot greeeed.

Your vanilla-man walks and jumps with absolutely no realism, which is good, because that's the only way this could possibly work. He has no inertia, air resistance, or friction. He stays where you put him and moves like lightning when you request it. About as ghost-white and bland as a lead character can possibly be, he is nontheless trustworthy.

The enemies are perhaps not such a great design decision. They too move with incredible speed, especially the vicious, ladder-climbing Snail Shark, but they can't kill you directly. Their goal is to delay you until the auto-scroll catches up, or possibly just knock you off a platform. Randomly appearing creatures that move too fast to be avoided are annoying, not fun. Annoying annoying annoying. They should have been stripped from the game and tossed in a juice-maker.

Regardless, I am firmly pro-Tower of Greed. The maddening features are the same ones that suck you back in over and over again. I can't say enough good things about a platform game that pulls random levels out of a hat and throws them at you rapid-fire, even if many of the harder bits are just the easy bits with more disappearing blocks and conveyor belts. It's a tough game, but it traps you anyway, by attacking the weak spot at your core. Endless treasure at your fingertips, but you have to know when to say when.

This is a great game! I keep chasing after the white gems. Also, I got the "impatient much?" trophy! :D
One small detail: How do you use the exits? Space? Shift? I can't get it to work.

Splurgy - try [up] or the key you're using for jump. That worked for me.

The randomly generated levels makes this game extremely addictive to me, and enhances the replay value exponentially. xD

Great find!
I love it how even the trophies get stripped from you if you die... evil

What's interesting is the fact that getting all the trophies is by no means an unachievable task. In fact, there seems to be only one (or two) trophies that are hard to get, and if you chase those two odds are you will pick up majority of the other ones on the way.

Overall a nice find. Like "Icy Tower" but with more platforming and less addictiveness.

I love this game. The soundtrack, the simplicity of the graphics. It all just fits together and works. What's also great is that since the levels are selected from a fixed amount, you can learn them and know beforehand which road is the safest/has the most gems/gets you an item. Even the enemy placement isn't completely random (I think there are several pre-set spawnpoints per tower segment, each of them has a chance of having an enemy).

The game really have a nice greed sensation :D. The retro style fit it and it have nice levels. It is a plus that player are given option where to go. Left? Right? Center? Is that weird stair on the farside lead to richness? Or it reach to nothing? Should I just hit the monster or wait it move away?

This game is more addicting than popping bubble wrap.

Great, after playing that now every webpage I try to read seems to be scrolling away from me...

Anyone have any tips on the one where you need to get as close as possible to the bottom? I can't ever seem to manage it, I either am too high, or I die.

Addicting game, but when (yes, when) they make a sequel, they must make it so you can use items after you get hit. I can't count how many times that wouldve saved me...

I had trouble with that one, too. Just try and try again. The sprite has to completely disappear from the screen, that I'm sure of. I think I managed to achieve it with the ladder.

Also, to trigger the trophy I think you have to climb all the way to the top of the screen after sinking below it, maybe this is what's keeping you from getting it.

"A winner isn't you."
That made me laugh so hard the first time.
Frustratingly fast, but fun.

Yay, I got it! Yeah, you need to get back to the top to get the trophy, which was why I wasn't getting it.

"Tower Or Greed" could easily be mistaken for a game of Nintendo in 1988(smile).

I'm a little confused as to the point of survival mode... yes, you get to 'bank' your gems & trophies but if you don't exit the tower at some point (ie die) then you lose them anyway. So isn't the 'bank' option nothing more than an elaborate pause?

Yeah banking doesn't seem to work - when I die in survival mode, it says it's saved my trophies, only... it hasn't.

@fuzzyevil, baba44713: getting "Close Call" is tricky? It must've been the third thing I ever got. Maybe I was just that bad with the controls...

It's tricky if you want to get it on purpose.

Btw, I'm missing just two trophies - the cumulative killing enemies one. Does anyone have them all? Is it worth it?

Anyway, one thing that seems really wanting is a record of your personal high score (and high level?). I've resorted to keeping one on a scrap of paper...

Need some help, I've downloaded it, but i'm unable to play. I need an emulator type program? Or do I just not have shockwave flash properly installed?

It's Flash, so it should run in your browser.

Ah XD no, I'm sorry, I meant I want to play it on my desktop. It runs fine in my browser

Jump so that the screen starts scrolling in the beginning, then get to the bottom, and jump AS SOON AS THE PLATFORM ABOVE YOU DISSAPEARS!!!

What is the "Nice Try" trophy?

Oh, never mind. I finally discovered that you can highlight an achievement and press the jump key to read what the requirement is.