Whether it's some kid driving 88 MPH in a modified DeLorean, two high schoolers having a most excellent journey in a special phone booth, or a quirky British guy in a scarf stepping out of a strange police box, popular culture has shown that people enjoy a good time-traveling tale. It comes as no surprise then that the developers at Artifex Mundi have tapped into this compelling chrono-concept in their latest hidden object adventure game, Time Mysteries: Inheritance. 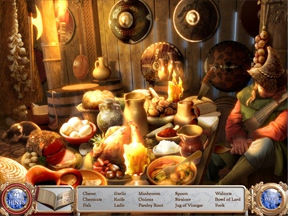 In this new title, you play a pretty young English physicist named Vivien Ambrose who travels to her father's country house to celebrate a recent award. Upon arriving she notices something amiss — who's that mysterious figure in her father's abandoned attic, and what was that sudden flash of light up there? After investigating, she finds her father missing and a cryptic note about her inheritance, seven rings, and a crystal ball. What follows is a time-traveling adventure spanning over a millennium, filled with varied locales, interesting characters, and numerous puzzles.

As an adventure-puzzler, Time Mysteries: Inheritance relies on your powers of observation along with nimble point-and-click mouse skills. In the adventure game portion, you get to travel to different locations, examine areas, and pick up objects (made easier thanks to a context-sensitive cursor and visible "hotspots"). Certain contextual puzzles require you to use a number of items from your inventory while consulting your diary to accomplish various tasks. Along the way you will encounter different characters and have text dialogues with them over beautifully-rendered scenes.

The meat and potatoes of gameplay, however, is the game's distinctive puzzles. There are around 18 assorted types of puzzles to be solved over the course of the game, each of them nicely themed around the storyline as Vivien traverses time and space to find her father. The vast majority of the puzzles are densely-populated hidden object scenes with a unique list of objects to find. No time limits get in the way of solving any of these puzzles, and hints are generously offered thanks to a recharging hint and skip system. In addition, many traditional puzzles make their appearance, including spot-the-difference, Towers of Hanoi, tangrams, and Mastermind. 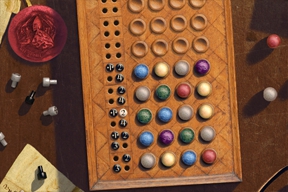 Analysis: I was happily surprised at the quality and level of engagement in Time Mysteries: Inheritance. This was one of my first exposures to downloadable games in a while, and in it I found an offering worthy of software found on store shelves. The graphics are lush and impressive, with a hand-painted look to them. The stationary scenes make good use of different lighting and animated effects to make them more dynamic. Further heightening the game's immersive quality is its excellent music soundtrack, which effectively places you in the time period Vivien happens to be visiting.

The adventure aspect of Time Mysteries: Inheritance is entertaining and geared towards the more casual gamer. I never encountered a situation where I didn't know what to do or where to go, but at the same time didn't feel that things were being made too easy for me. Each object has a fairly clear use, and talking to characters or referring to your diary makes things pretty clear. The storyline is a little far-fetched at times (Vivien can converse in perfect modern English with her 7th Century ancestor!), but interesting nonetheless, and makes you want to learn a bit more about the Ambrose lineage as you play.

As far as the puzzles go, they are challenging without being too difficult, and the high quality of the graphics makes playing through them quite fun. There isn't too much ramp-up in difficulty — most of the hidden object screens are similar in their number of objects and their deviousness in object placement. A few puzzles, such as the chess-knight level and the puzzle involving filling a board with toggled runes, will likely require much plugging away and experimentation before they are vanquished. Having the hint button readily available without serious consequence (except for having to play a match-3 mini-game to recharge your hints) means that you shouldn't have much difficulty getting through the game. For more seasoned gamers, an "expert" mode is available if you want fewer opportunities for hints and less visible hotspots.

Time Mysteries: Inheritance is a fun puzzler and adventure offering that should appeal to most casual gamers looking for an enjoyable experience across various settings. It uses the time-traveling concept to good advantage, giving players a nice assortment of puzzles and locations you might not normally find together in a single game. While some hard core adventure fans and puzzle solvers might feel this 3-5 hour offering leaves them wanting more, this game delivers an entertaining experience overall. It even leaves the door open at the end for a sequel, so perhaps we may see more time-bending titles with the Ambrose clan in the future... or perhaps the past? So think about putting aside some time yourself for this time bending game and see if you can tackle the challenge and help rescue Vivien's lost father.

In front of the Witch's House

In front of the Witch's House

There is something important to note about the very first puzzle, the chess puzzle:

It seems impossible at first, as a 4x4 Knight's Tour does not exist, neither open nor closed. But the key to solving that puzzle is to jump to a field more than once. That is the only way the puzzle can be solved.

in the 19th century I can't get to the god forsaken painting! I've clicked the whole freaking surface of it!!!!!!!!!!!

@k
What painting are you talking about?

ch. 3 19th century in the film room you are supposed to be able to get into the painting on the wall but every time I try to click on it, it wont let me it's like I'm clicking dead space or something and I know it is somehow active because of the blue lights or whatever but I've clicked every pixel of the painting and it won't work!

Oh, now I know.
You will need to click this painting twice - once to enter a hidden-object scene and at the end of the level to get the magic ring.

Did you try a second profile to see, if it is "just" a glitch?

Chapter 5: 15th Century, the painting in the hall, I can't find the third pear.
When I click hint it says there is nothing hidden there ...
What did I do wrong???

I have that same problem with the pear in the painting. I found a screen-shot of where all 13 hidden items are in the painting and I got all of them but it still says I am missing a pear. Does anyone know if that's a common glitch or is there a trick to the painting?

I am stuck, please help me. Where is the third pear? I can not find her.

i cannot find the third pear in the painting.

I need assistance please.
I've reached the 7th Century witch's house. I managed to find all but one gem for the hexagon. The missing gem spot gets a comment "It looks like something was lying here not too long ago"
I find a camera and the comment "Our culprit must have dropped this when he fought Osthryd."
I can't seem to watch any video on the camera and can get no more help from the witch til I fix the divination circle.
I really would like to move on but can't yet. Help, please

Ron -
Check the walkthrough above the comments for more help.

i can't find the third pear on the painting also and when i click on hints it says nothing is available on this site.help please

i have the third pear problem too. :( IS there a patch or something i need to load??