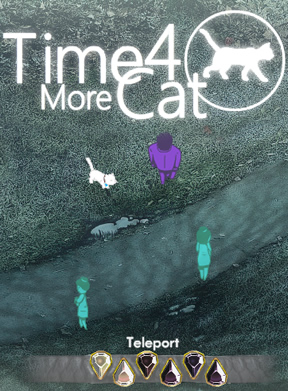 Megadev's fancy feline is back in a sequel to 2009's cat nomming adventure with even more arcade avoidance action. Time 4 More Cat follows a cat that wanders through a hole in a fence one day and stumbles across a strange force that alters his reality. Suddenly, he finds himself in a strange realm where people only move when he does, food falls from the sky, and collecting mysterious glowing orbs imbues him with very unusual powers. Will he ever find his way home?

Whatever game mode you select, the cat always follows your mouse around screen. The objective of the game is basically unchanged; eat food, avoid people. Touching people results in failure (although the story mode gives you three lives), but since they only move when you do, you can pick your course carefully. Don't go too slowly, however, as food that falls from the sky has a timer on it, and the quicker you eat it the better.

As you progress, obstacles become more frequent, and more dangerous, from whirling plastic bags that follow you to bulky vehicles that are hard to avoid. Collecting the white orbs that appear grants you a single use power, such as Push or Teleport, and the ability changes the more orbs you gather. Using one power burns all the orbs in your possession, so think carefully about what's more useful for you.

Considering how simple yet lovely the original was, it's impressive that Time 4 More Cat manages to improve on it without piling on so much that you lose the addictive ease and simplicity that made it popular to begin with. The art is beautiful, soft, and surreal, while the soundtrack only adds to the dreamlike atmosphere. Forcing a three strikes rule to the story mode feels like it may be too restrictive, since you have to start all over if you lose. But with seven different modes to choose from and a stellar presentation, Time 4 More Cat is exactly the sort of true to form and hard to put down, simple sequel we like to see. Come on, there's always time for more cat!

In case anyone else is insatiably curious for a guide:
Hints & Tips

==Orb Power-Ups==
Crystals at the bottom of the screen display how many orbs you've gotten. More orbs = different powers, but each power is single-use. Every time you die, your orbs reset to 0.

Different words in the white screen at the beginning of each level. As far as I can tell, it's randomly generated, with no effect on the game.

In case anyone else is insatiably curious for a guide:
Hints & Tips

==Orb Power-Ups==
Crystals at the bottom of the screen display how many orbs you've gotten. More orbs = different powers, but each power is single-use. Every time you die, your orbs reset to 0.

Different words in the white screen at the beginning of each level. As far as I can tell, it's randomly generated, with no effect on the game.