You begin in a bunker, presented with only a series of doors locked by an impossibly simple line puzzle. Finally freeing yourself of the darkness, you spill out into the glorious sunshine, awash in the Island's vibrantly chromatic landscape, only to find that still more of these mysterious line puzzles and locked doors surround you. You have no inventory, no guide, and you are completely alone. Where do you go from here?

For The Witness, developed by Thekla Inc. and spearheaded by Jonathan Blow, mastermind behind 2008's indie platformer Braid, initial comparisons to Myst and The Talos Principle are almost impossible to avoid. You exist as the sole inhabitant on a mysterious landmass filled with puzzles that at first seem esoteric, but quickly reveal themselves to be tests of mental acuity that are both astoundingly clever and brutally punishing in their difficulty. It's not until the game world opens to you, both literally and figuratively, that the supremely unique nature of this game begins to take formal shape. It is in many parts tough puzzler, stunning art piece, and contemplative philosophical experience, though much of the game's natural beauty allows these pieces to be fluid in their importance and relevance to the player at any given time. 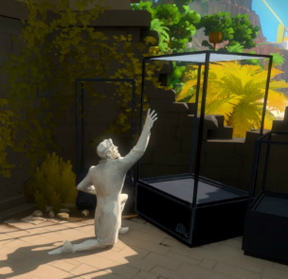 At their most general, puzzles tend to come in two varieties: one that relies on an iterative logic, drawing on basic math and geometry concepts, and one that relies on a broad spatial awareness of the game world around you. Following the initial starting area, which serves as the closest thing to a tutorial The Witness ever provides, the entirety of the map becomes available, allowing you to travel freely between each area. The Island itself comprises around 18 different areas, generally themed to different biomes (e.g. The Swamp, The Orchard) and locations (e.g. The Quarry, The Monastery), with each featuring unique puzzle sets tailored to the setting and landscape. Completing an area's puzzle set will unlock a laser that points toward the top of the mysterious, lone mountain on the Island. It's important to remember, as The Witness shows us early, that many things on the Island are optional, but nothing is without some relevance. Not every puzzle area has a laser to be lit and, indeed, not every laser needs to be lit in order to experience the closest thing this game provides to a natural ending. The player is welcome to attempt each themed area in any sequence that feels most natural to them, though this freedom of choice is somewhat superficial; the logic of the puzzles tends to build on itself over time, creating a vaguely guided progression as to the order in which the areas should be completed. Puzzles in many of the deeper parts of the Island may be incomprehensible to players at the outset and, fairly, the player will be extremely ill-prepared to face many of the Island's most robust challenges without mastering several key puzzle areas. It's certainly worth mentioning here that players with certain types of colorblindness or hearing impairment may find some areas extremely difficult or nearly impossible to complete without assistance, which, although it doesn't prevent basic completion of the game, is still somewhat unfortunate as it does prevent these players accessing many of the game's deeper secrets as organically as they were intended to be uncovered. 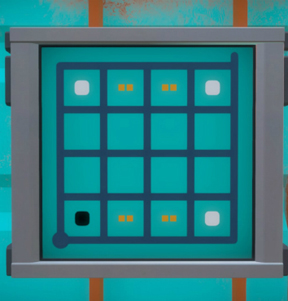 Aside from being a game about simply solving, The Witness also exists in many ways as a game about finding. What the Island provides at face value barely scratches the surface of what the entire game world has to offer. As you begin to become immersed in this strange new place, you may start notice the ways that certain objects seem out of place, that some doors don't have obvious mechanisms to unlock them, that certain puzzle patterns tend to replicate outside their natural constraints. There are tapes with recordings of voices reciting passages from ancient scholars and famous philosophers. You may occasionally find yourself in the company of stone statues in a variety of costumes and poses. A few lone puzzle panels, connected to seemingly nothing, sit in quiet corners, waiting to be solved. The Witness provides many opportunities for asking "Why?" though not all the answers are obvious at the start and many answers never truly arrive. Fans of intricate narratives may find themselves frustrated by such vague open-endedness, as much as some players may despise the blips of overt introspection, but these moments exist in parallel with the blissful freedom to take away from the Island what most speaks to you as an individual. What you bring to the experience, paired with the experience itself, helps to give answers to lingering whys the game leaves in your hands. There is much to uncover and much to learn from The Witness, and part of its beauty exists in simply being present to take in what it so broadly offers.

Despite the lack of narrative and formal direction, The Witness perhaps excels most in the way players are gently and organically taught to interact with this peculiar universe. It becomes very easy to get lost in the simple practice of reacting and learning. While many puzzles can be frustratingly difficult, sometimes requiring a simple break or just moving on to a different area, the player's consistent curiosity and tenacity are rewarded with new places to explore, new puzzles to solve, and new mysteries begging to be uncovered. The moments of serendipity, and there are opportunities for many in the places you might least expect, are utterly dizzying in their grandeur. The satisfaction of figuring out a new secret or finishing a particularly difficult area is intense and gratifying. To combat these highs, at times, the game's simplicity of sound provides a different, more meditative experience; The Witness has no musical soundtrack and is merely a collection of ambient noises. The wind blowing through the trees, the trickle of water in a stream, the sound of your shoes in the dirt. Take a deep breath. Close your eyes. The answers will find you, or you them, in time.

The Witness is currently available for Windows PC, Xbox One, and PlayStation 4, with the developers remaining interested in bringing it to Mac users, as well as iOS and Android devices in the future. Though certainly not an inexpensive experience, The Witness comprises easily more than 20 hours of gameplay and will surely satisfy even the biggest puzzle buffs for hours longer.

I'm going straight to the play link and then I'll come back and read the rest. Great writing!

Thanks for the kind words. I certainly wish it was a web game sometimes, if only so it could get into the hands of more players! I'm hoping at least it will see some more ports in the near future to hopefully make it easier to access for most folks.

This review reminded me that I hadn't finished this one, and I took care of that last night. Just an incredible game. I wish more games had enough faith in their players to just throw them right into it with no real tutorial to speak of.

Absolutely phenomenal game and I encourage everyone who hasn't played it to buy it. I think its on sale half price on steam. I'd gladly pay full price for it again

I played this game and I cannot tell you in words my full feelings for this game. This game turns puzzle making... into art. The way this game is built boggles me to this day. I have no clue how any number of humans could think of the construction of a project like this. The way the island is built, the perspective secrets, and little Escher like quirks make this game feel like a fantasy land. The island feels like something out of a Rob Gonsalves painting. I got feelings of euphoria when I played, every puzzle is brilliantly crafted, just like the land.
The Witness is so simple in its premise: Mazes, which gets more complicated when adding shapes and colors that follow specific rules. Thekla Inc has made a new genre of puzzles! The special thing about this puzzle is that it is best played digitally, where you can make mistakes. These puzzles would not go that well on paper. PLEASE PLAY THIS GAME!

There's "a certain challenge" hidden deep deep within the game that I've heard people complain about, but it's actually one of my favorite moments in any game I've ever played. After a bit of a disappointing ending it re-elevated the game to being my third most played steam game with over 130 hours across many playthroughs. The game is absolutely gorgeous, and there's a few discoveries to be made that completely change the whole dynamic of the game. It also has an almost magical Dark Souls like ability to lead you down a long twisting path for an hour only to have it open back up into a familiar area. Overall, a great choice for any puzzle game enthusiast. I also have a list of every puzzle and other hidden thing in the game is a quite messy text file on my computer which I'll see about formatting into a more formal guide of some sort.

I'll be very interested in publishing a guide or a detailed walkthrough for this game. You can reach me: [email protected]

Holler when it's available for Mac. :)