Indie puzzle adventure The Talos Principle, created by Croteam, Jonas Kyratzes and FTL: Faster Than Light's Tom Jubert, opens with a heavenly choir and roiling white clouds before you find yourself in a garden before a sprawling series of ruins. A great voice informs you its name is Elohim, your creator, and bids you find him in his temple, but first you must overcome the trials set before you, and find the Sigils hidden throughout. Then, you'll be fit to serve, and, he adds, attain eternal life. What do you think? After the trials, will there be cake? Use [WASD] or the [arrow] keys to move, hold [shift] to run, tap [spacebar] to jump, the mouse to look around, and click to pick up, put down, or interact with items. You'll start with Jammers, which can disable anything electronic as long as they're aimed at it, but you'll soon graduate to Connectors, which can be used to set up chains of lasers to activate different things, and more you'll unlock as you go. Threats can be things like the patrolling black orbs that explode if you get too close, or the wall-mounted turrets, but don't worry... if you die, you'll just be rewound back to the start of whatever area you entered. Each area is a contained puzzle, and completing it rewards you with a Sigil, which look like Tetrominoes, and multiple Sigils are needed to open the doors that allow you to proceed deeper in. As you explore, you discover the various worlds your creator has made for you, free for you to "subdue" as you please... but that great tower? That's the one place you're never allowed to go. It might seem like a perfectly reasonable restriction at first as you explore the various places crafted with challenges for you to master, but as you go farther, it quickly becomes apparent you're not the only one who has passed this way, and malfunctioning terminals filled with fragments of text hint that something very big has happened. And then there's the being who communicates with you through the terminals only when it sees fit... 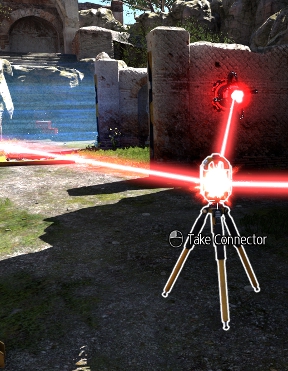 The Talos Principle starts off slow, with a difficulty curve that allows you to learn as you go without feeling like you're being held by the hand too much. The game offers no real instruction, so you're left to your own devices to figure out how things work, how different elements interact with one another, and what the rules are. You're not taught by what you're told, you're taught by experimenting with what you're given and doing. The game is designed so that a large main hub opens up into a series of smaller hubs, which each have several self-contained puzzles within them, spread out around a large area for you to explore. The Talos Principle actually goes a long way towards making the entire experience feel as frustration-free as possible. The levels are generally small and well designed enough that having to restart at a checkpoint isn't much of a setback. Heck, for the most part, you can even complete the stages in whatever order you please, though some require you to have unlocked new equipment first. If you get stuck, just play another area, which can often give you the perspective you need to crack whatever's been hanging you up. The way signs keep track of what Sigils you've collected lets you know at a glance where you still need to go, and you can even tweak your movement speed under the options if you're impatient.

Taken purely as a puzzle game, The Talos Principle is smart as a whip, and will make you feel by turn very clever and very stupid. I spent too long stuck on a single level, growing increasingly more resentful of Elohim's gentle reminders that there was "no shame" in trying something else, trying every conceivable configuration under the sun... before I realized I was overthinking things to an almost embarrassing degree. The game is at is best when the levels are smaller and more contained, since stages that involve a lot of running back and forth, moving lasers and unlocking different doors one by one are far more tedious than a level that seems simple if only because everything appears to be laid before you in a straight-forward fashion. While some players may find the text-heavy, often obscure terminals and solve puzzle - get puzzle piece - solve more puzzles formula a little much, if you love a game that is as much a philosophical puzzle as a physical one, The Talos Principle is really going to suck you in. While there are levels where you'll need to be quick to bypass certain dangers, the stages that shine are the ones where it's just you and the puzzle, puttering around making thoughtful hmmm sounds to yourself, and the gorgeous, mellow atmosphere only encourages it. 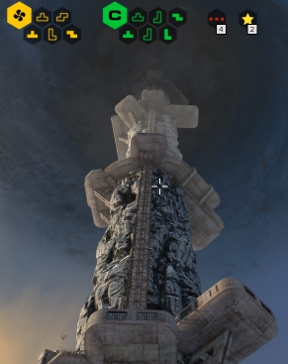 The changing weather is a stunner, while the quiet soundtrack immerses you in the experience. It's an extremely contemplative experience, too, always knowing exactly when to drop some new tidbit through the terminals for you to ruminate on. The more you play, the more pieces you'll have to the narrative, but figuring out how they all go together is easier said than done. More than its core story, however, The Talos Principle is great at getting you thinking about things in general. Humanity, or rather just the consequences and ideas of sentience, is something that's been explored a great deal in everything from books to movies and more, but The Talos Principle manages to make you draw your own conclusions and challenge the way you think without beating you over the head or spoon-feeding you how you're "supposed" to feel. It's a long game, longer if you're the sort that wants to track down every single stage and star, and for many players it's also going to be a spellbinding one. You owe it to yourself to check the demo out at the very least, but make no mistake... this clever, mentally and emotionally engaging game comes recommended with ease.

I played the demo of this at PAX and really enjoyed the atmosphere and clever puzzles. It has a feeling of Myst meets Portal. Loved it!

ok, i seriously need to know... is there a tag or an icon or something on posts like this that tells you beforehand that 'hey, this is a game you have to pay money for' or something of the sort? because 'demo' and 'download' do not always mean that you have to have nearly forty dollars in order to play the game you just read a neat review for.

like i'm not saying stop doing reviews for games which cost money, not at all -- i'm sure you all have an affiliate system which helps y'all stay running, and there's definitely times where a review for a game is enough to make me want to spend cash on it.

but. also. 90% of the time. i am not in possession of this human item called money. so it'd be nice to know when a game is going to smack me in the face with a 35 dollar price tag as soon as i open it and cause me vast disappointment and irritation at my own inability to grow money trees

I just played the demo and, yeah, I think I'm in love. As soon as I knew Jonas Kyratzes was involved, how could I not be? I'm still debating whether to buy it, since the price is more than what I usually spend on games, but I think this one's worth it and I really want to see it do well.

For me, the tag 'steam' usually indicates that some expenditure is required, although this game has so many tags it took me a moment to find it.