Robert Kirkman's beloved "everything you love is doomed" zombie disaster comic series shambled out of ink and onto our televisions in 2010, and now they're here to take over your computer. The Walking Dead is a new episodic adventure game series from TellTale Games that delivers a gut-punch of uncomfortable violence and viscera rendered in gorgeous, gory detail. The story follows a new character, Lee, who is on his way to prison in the back of a police cruiser when the zombies hit the fan, so to speak. Waking up seriously injured from a crash with no allies to speak of is bad enough, but with the undead in hot, shambling pursuit, there's no time for self pity. But is there time for honesty? Your choices will determine Lee's survival and that of those around him in this frenetic, grim adventure. 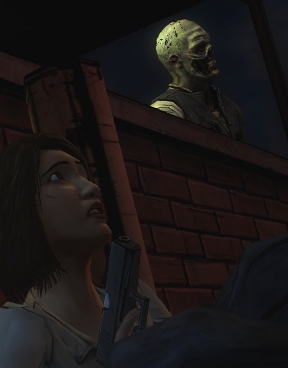 The game plays half like a traditional adventure game and half like an interactive movie. During exploration sequences, you'll use the [WASD] keys to walk around and the mouse to interact with things whenever an option pops up when you pass it over an area. Depending on the level of difficulty you choose at the start of the game, you may not get much indication of what you can interact with unless your cursor is right over it, so search everywhere. When talking to people, you can either use your mouse scroll wheel or the number keys to select dialogue options, but don't take too long since what you say has a big impact on how things play out, and many scenes require you to pick your choices quickly.

During certain scenes, however, you won't get much chance to parley, and you're going to want to think and act quickly. In addition to needing to follow onscreen prompts to deal with zombies, such as rapidly hitting a key to push one away, you'll also have to be able to aim and attack in certain situations by pointing the cursor at a likely target (oh, say, the head) and clicking to strike or fire. Almost more important than staying alive, however, is gaining the trust of the people around you. After all, when the chips are down, if nobody believes in you, you're going to be stuck with the Sno Ball while everyone else gets Twinkies. 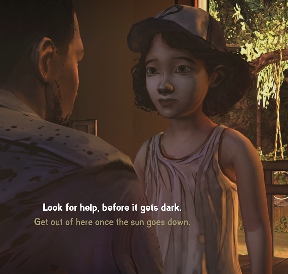 Analysis: So how is the beloved apocalyptic franchise as a game? Well... pretty good, actually. The combination of traditional adventure gameplay with quick-time event style sequences won't appeal to everyone, but in this case it tends to work more than it doesn't. You never really wind up feeling safe, always waiting for the proverbial you-know-what to hit the fan, and the action is always brutal and frantic when it occurs. Playing with the choice for minimal in-game help largely makes the whole experience a lot more immersive since talking to people is a lot more tense and realistic if you aren't sure if they're buying what you're selling, or if it'll come back to haunt you. On the downside, there are definitely times where the game really does feel like a glorified digital Choose Your Own Adventure title, with the few true puzzles spaced far apart. And no, figuring out that a battery-powered object needs batteries and for them to be properly inserted doesn't count as a puzzle.

The game is, of course, not without its frustrations. The hot-spots for interactivity can be very small and not cover entire objects, making it easy to miss them with your cursor, doubly so in the more frenetic scenes. The game can sometimes be too dark, so you can miss objects simply because they don't stand out. The artsy sweeping camera angles can sometimes get in the way of navigation. And Lee... tends to fall down a lot. Yeah, his leg's hurt, and that cracking sound when he tries to bend over to pick something up is wonderfully gruesome, but after the fourth time he falls on his keister you'll start expecting the sad trombone music to kick in with a wah-wah-waaaaaah. 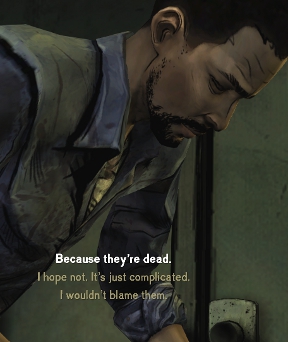 The Walking Dead is, largely, very well written. Some characters never really evolve from characters to people. If there's anything to really be said against it, it's that the truth surrounding Lee remains, at least by the end of the only episode available at the time of this writing, so maddeningly vague that his whole character is sort of up in the air. Ultimately, I chose to play him as a good guy, and time will tell whether The Walking Dead decides to stomp all over that. The voice acting is on the whole top notch, with some particularly robust performances to make up for the lacklustre ones. The game is also kinda unexpectedly beautiful, full of expressive characters, and brilliant use of lighting and camera angles.

I admit, I was a little skeptical of TellTale's ability to handle this series. Not from a technical standpoint, but, well, we are talking about source material that includes decapitation with scissors. That being said, even I was a little stunned at how up close and visceral this game was willing to be. The Walking Dead is exceptionally gory, but also very, very violent in a way that both never lets you relax and forces you to get your hands dirty. It's close, and it's personal, and it emphasizes the "survival" part of "survival horror". Fans of the comic and television series will appreciate seeing familiar faces make an appearance, but by the end of episode one Lee and Clementine will have grown on you quite a bit. This first episode ran me close to three hours, and left me wanting more. The Walking Dead embraces and then devours the brains of its source material in big sloppy bites, and succeeds in spite of its flaws to deliver a hard-hitting, visceral adventure.

Windows:
Get the full version
Also available from Steam

It's great. Stoked for the next episodes. And I guess since it's taken me this long to borrow a PS3 to play Heavy Rain, I shouldn't be too hurt by the spoiler. ;)

Well, it was more a comment on the gameplay of Heavy Rain than the plot, but since you feel that way I decided to delete the reference. :)

I would recommend Heavy Rain. The gameplay can be frustrating, but it's an excellent experiment in storytelling.

Definitely an engaging story, even if it's pretty early to tell where it is going, but I have no real complaint on the plot at the current moment, maybe apart from some minor clich� that is expected to be in a zombie series.
I'm just a bit disappointed by the gameplay that is not really my cup of tea. The Quick Time Event are probably too slow for me to make me feel any urgency, the puzzles are not smart and extremely easy. If it was me I'd basically drop both these aspects and instead concentrate all my efforts on the only interesting feature, the freedom of choices. If they develop on that and actually make me feel the game is actually tailored with my choices instead of following a set plot with some change, this project will be a huge success for me.

Loving this game! Love how TTG make the decision making, love and hateable characters, and the light thrill.

Only one oddness that really makes me frown though:

Lee scarred when he have to pick the keys from the dead police. He shouldn't know there is zombies invasion yet.

Hah.
Don't censor yourself just because I'm too lazy to get around to game I want to play, Dora.
I think you're a fantastic writer on here.
I have played Indigo Prophecy and am one of the minority that loves this type of emotionally immersive gaming experiences that puts you in the middle of tough decisions that actually make you question your morals, where story is king, but somehow you walk out still feeling like you were apart of it, not just a fly on the wall.

Sorry to pollute the comments, but you should change the tag from "telltale" to "telltalegames" since that's what is used for the other games.