The Walking Dead: Season 2
Episode One: All That Remains

TellTale Games stunned players with their adventure game The Walking Dead when they provided one of the most powerful, emotional, and intense pieces of gaming we'd seen in a long time. Taking place across five episodes and set in the same universe as the hit TV and comic series (though with an entirely new cast of characters and plots), the game focused on Lee, a man shackled by his past and his decisions, and Clementine, the young girl who falls in with him. Now The Walking Dead: Season 2 is finally here and the story is about to continue with the mantle of protagonist resting squarely on the shoulders of young Clementine. The choices you made in Season One carry over to impact her experience here, so make sure you have your save file handy since the game will scan your computer for it once you start or the game will randomly assign choices based on unfinished content. Buying this means you gain access to all the rest of the episodes in the series as they are released over the next year... you're buying an entire season, not just this first installment! 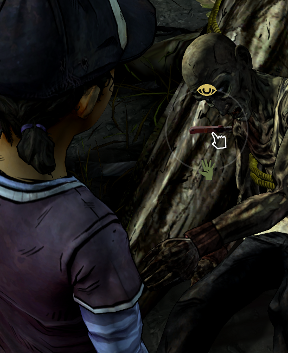 After a short opening sequence, Season 2's Episode One: All That Remains takes an enormous leap forward... sixteen months later, to be exact. Clem's a little older, a little wiser by way of the school of hard knocks, and her situation is even grimmer. Lost and alone in an enormous forest where danger lurks around every corner, Clem has nobody to rely on but herself. Just when things look grimmest, however, Clem finds herself thrown together with a new group of survivors... but with nobody keen on trusting her, and everyone seemingly keeping their own secrets, was she better off on her own?

Although played traditionally like a point-and-click adventure, The Walking Dead incorporates some action elements to its design. You'll move with [WASD], holding [shift] to run (LIES), and interact by clicking on the action you want to perform from the context menus over objects, cycling through inventory with the mouse wheel. During conversations, you'll frequently be given choices to make... they could be as simple as deciding how to act towards someone, or as complex as who lives and dies. In most cases, you'll have a limited time to respond by clicking your option, and not saying anything by waiting for the white bar beneath the dialogue to vanish simply counts as staying silent... a choice in itself. Characters will remember things you've told them, making lying a dangerous game, and everything impacts how the story plays out. The game autosaves for you, and if you die like, say, during one of the game's fast-paced action sequences that cause you to move and make choices or hit keys quickly, you'll be booted back to the last checkpoint. 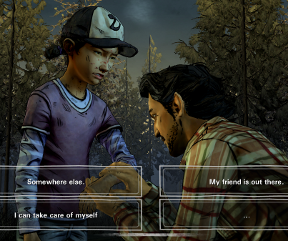 Analysis: As a little girl, Clem is threatened by and more vulnerable to far more things than an adult. Clem is also an incredibly resourceful, tough, and determined little girl, however, capable of saving herself. Season Two's Clem is someone whose outlook and priorities have noticeably shifted as a result of what she's gone through. The ways the game subtly shows how she's changed, from the way she talks to people to the way she reacts to things, are both heartbreaking and realistic. The focus in episode one is simply survival, and while that's far from a bad goal to have, it does make the plot feel a little directionless at the moment. It sort of feels like this episode is mostly just establishing things without really getting any sort of ball rolling, and it does a lot of trying to make you flinch. People who are sensitive specifically to violence against animals may find this episode hard to take. 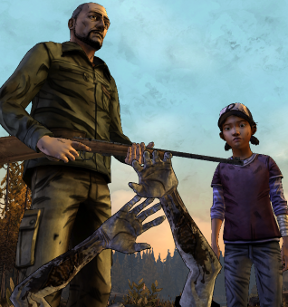 All That Remains feels particularly action-heavy, with multiple scenes that force you to react quickly to keep Clem alive. In keeping with Season One, there isn't much puzzling solving to be done here, and the minor changes to the game's UI don't feel like they impact the gameplay significantly. I was initially excited to see the run function be introduced just to speed up movement, but honestly all it does is turn Clem's lazy saunter into a mildly quicker shuffle. Any real difficulty the game has to offer simply comes from overcoming its quick time events or mashing buttons, neither of which is particularly difficult. It would have been nice to see the game offer a few more cerebral challenges, but as it is, it's more action focused than anything else.

It is, in short, still the same game, just with new faces. None of them really get a chance to establish themselves yet except in the broadest possible strokes, but they're filling in with bits and pieces that serve to intrigue you and make you want to know more. It doesn't necessarily feel like Clem has, at least right now, been given the sort of heavyweight decisions Lee had to deal with right away, so most of your time is simply spent figuring out how to talk to people... something that's harder than it sounds. After all, you're a few years into ye olde zombie apocalypse by now, and everyone is more than a little on edge, and looking out for themselves. The tone can switch from calm to shockingly violent fast enough to give you whiplash, and as a result you're constantly on edge waiting for something to happen. In contrast to Season One's violence, which was often brutal but fast, Season Two seems to linger more on pain up close and personal in a way that almost feels... voyeuristic?

It took me around two hours to play through this episode, and it did seem like it ended very abruptly. It's a grim, dark experience from start to finish, in a world where bad things happen for no reason, and sometimes you have to do ugly, dirty things in order to survive. As things stand, most of the influences from my save file from the previous season felt, largely, pretty subtle, though the preview of the upcoming episode seems to imply that could all change. I don't feel as immediately hooked on this as I did before because I'm not sure where it's going, but I am very intrigued. It remains to be seen what kind of story Clem has to carry, considering she was the ultimate "goal" of the first season, but The Walking Dead: Season 2 comes out swinging and looking to fight, and stands to serve up every ounce of the emotional beating the original did as it gathers momentum.

I tried the demo for Season 1 on my PS3 and couldn't even get out of the first house--or rather, quickly gave up because the controls were clunky and the game objectives (not the story objectives) were not clear. Is it easier to play, from the standpoint of mechanics, on a computer? Would it be playable with a touchpad or better with a mouse?

I'm such a huge fan of TWD series, I really wanted to get in to this game, and I thought the price was pretty good all things considered. But I don't want game play to be frustrating. Also, any comparison to the mobile version?

Sorry, I haven't played the original game on iOS, but the first chapter IS free, so trying it costs nothing.

As to how much easier it is to play on the computer, well... sort of? The WASD movement is pretty standard, and the point-and-click style of interaction is a lot more natural with the mouse. Both this and season one have a LOT of fast-paced CLICK THAT THING NOW scenes that might be difficult with a track pad, though my main complaint about season one, which was that interactive zones were miniscule compared to the objects they were on (click this ONE spot on this whole umbrella to use it!) seems to have been eliminated or at least toned down. I would say that it's intuitive in its mechanical design on the PC, but not having played the console versions (sorry, I don't have it in me to buy the same game multiple times!) I can't offer you a straight comparison betwixt the two. I WILL say that it does feel as if it were designed specifically for computers, so take that as you will.

Cool--that "everything is so tiny, where do I click it" was my big problem with the PS3 controller. I would be dead long before I could get to the teensy tinesy target! I am downloading the iOS version now (I noticed after I asked that episode 1 was free), so maybe that's the answer for me.

Come on Dora, Queen of the Gamers!! You aren't playing every game on every device? haha

Did you notice any bugs/glitches in the game? (Or have you heard/read of any?). Since I know Season 1 used to have a lot of bugs per episode after releases so they had to fix things before it was stable and playable.

Either way, can't wait till more is released, it sounds exciting so far!

Hi Solatoral! I completely understand... I'm the same way with comics! As to bugs, it seems a lot more stable than most of season one's games on initial release, and I haven't heard of anything myself. The worst I personally experienced was a series of minor graphical glitches, like someone's shadow getting "stuck", and someone's eyelids going INSANE, jittering and jerking around briefly, which was mostly just hilarious.

I have a problem... At the part where Clem needs to place a log in the campfire, I cannot do it. I collected the log, I can click on the little circle at the fire but nothing happens. Usually in the bottom left corner when you can do something with an object it will say "Examine object" or "Use object" but for me it just says "Campfire" and no mater what I do I can't advance. Please help?

Hi castielidk. Season 2s interface is a little different than season one. If you have the log, there should be an icon that looks like a flame in the bottom of the menu that pops up when you mouse over the fire. You need to click that specifically. You might want to try being closer to the fire or coming at it from a different angle... I don't know why, but this seemed a little fiddly about accepting the log for me too.