TellTale's stunning emotional and visceral adventure game The Walking Dead is one of those things you have to be in the mood to play... you don't watch Braveheart or Schindler's List when you want some cheering up, after all. They proved that not only is there still life to be found in the well-trodden ground that is the zombie game, but that you can create a game that's horrifying and dark but also moving and emotionally engaging too, thanks in no small part to the protagonist dynamos of Lee and Clem and a staggering amount of personal accountability. We still have a while before Season Two hits, but to tide us over, now we have The Walking Dead: 400 Days (requires The Walking Dead to play), a story-centric standalone chapter that takes place in the same world and setting, but follows five different stories of brand new survivors that forces you to make difficult new decisions. 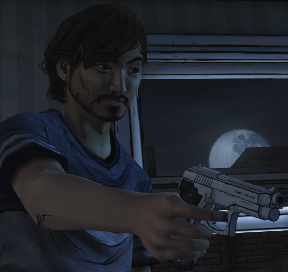 The end of the world is in full swing as the game begins, bustling highways reduced to dry gasps filled with the shambling undead. You can choose to play the five stories in any order you wish by selecting the photo you want from the fluttering message board of missing people. Great sign, right? Each survivor has their own unique tale to tell, set at different points in time. As in the original game, use [WASD] to move when available, and the mouse to interact whenever an icon pops up over something. The game is considerably more "on rails" this time around, with a greater emphasis placed on dialogue choices and quick time events as gameplay for a "choose your own adventure" style experience. 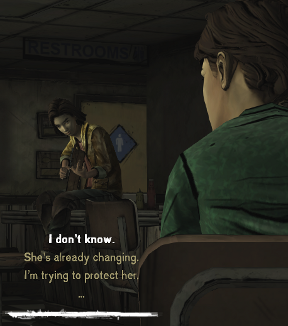 Analysis: Because of the way the game is set up, the you wouldn't think the pacing would allow for the careful, deep character development of the first game. They're snapshots, not full-fledged character arcs, after all, and they tend to be short and punchy. The focus here is more on themes, a sort of "what if?" set of circumstances and dilemmas, but this new cast of survivors still manages to pack a remarkable punch, and you'll look at all of them differently by the time their stories are over. Some characters get considerably more development than others because of the way their chapters are constructed... Russell, for instance, has more of an action-centric tale about trust and the dark side, while Shel's is a slow boil that focuses more on the concepts of humanity and consequences.

Each story should take no more than twenty minutes or so to play through, but since most of them feature pivotal choices at multiple points, you'll want to play through again to see what happens. I grew remarkably attached to nearly all of the new characters and desperately wanted to know more about them, where they were going, and what would happen to them... and maybe even felt my heart ache a little because I suspected what would be coming. On the downside, there is no real puzzle solving whatsoever, only constantly moving forward, and I often felt like many situations were missing a third option that would have allowed me to react the way I really wanted to. Despite being the character I loved the most, Bonnie's chapter is also bogged down by a frustrating stealth chase sequence. Still, though far more linear and substantially shorter than one of the episodes in the first season, The Walking Dead: 400 Days is a masterful storytelling experience that deserves your attention. At only around two hours or so of play time, not including replays, the game will do little more than whet your appetite for more to come, but provides far more character and tense moments than virtually any other zombie game (or movie) out there... especially since it's not the zombies you need to be afraid of.

Windows:
Get the full version Also available from Steam

I just hope when they DO finish TWD:Season 2, it's not incredibly overrated and over hyped like most games are nowadays when they're highly anticipated.

@Solatoral
Yeah, that's one thing that really peeves me about video games these days. 9001/10 CITIZEN KANE OF GAMING UNTIL THE NEXT MARKETED-TO-HECK GAME COMES OUT