The Tribloos 2 from Bumpkin Brothers is a sequel to the 2011 simulation/time management game The Tribloos. Set in a 2D world starring energetic and eternally optimistic creatures, you'll guide the fuzzballs on a quest to discover the origins of some troubling storms looming near the island. What they find beyond the clouds, however, isn't quite what they expected! 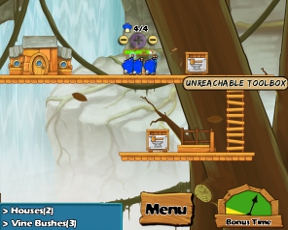 As the benevolent administrator it's your job to organize the tribloos to distribute labor as efficiently as possible. You do this by assigning workers to gather resources, remove obstacles, rebuild houses, sawmills and other structures, and staff these locations to keep the resources rolling in. Each level has a series of goals listed at the bottom of the screen along with a timer that gradually sweeps to the left. Work as precisely as you can, never dawdling or making unnecessary work requests, and you just might get the full rainbow of a score at the end of the stage!

To send out a tribloo worker, simply click on an icon floating above a building or pile of resources. You can usually assign multiple workers to the same task, speeding up its completion considerably, but often you'll want to spread the labor out to keep multiple projects running simultaneously. The worker does his thing until the green bar fills then returns to home base to deposit any resources gathered. If nothing was harvested, you can immediately set the worker to another task. Provided you have the required resources, of course. 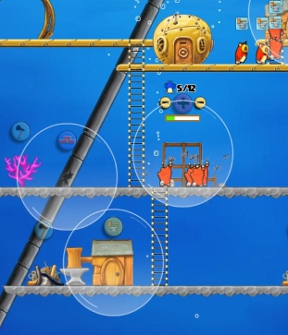 Analysis: Mastering The Tribloos 2 is an exercise in orderly administration. That's an awfully dull thing to say, but the game is never boring, we promise! You start each stage by gathering a few resources. Resources are used to build houses that provide more workers, structures that provide more resources, or other buildings necessary for completing the stage. It's your job to figure out which paths to clear, which order to clear them in, and where everybody needs to be at every moment. If a tribloo isn't on a job, find something for him to do! You are the ultimate manager, and if you don't want to end up painted in a corner with an empty resources bucket, get a plan of action going before you start clicking!

Compared to its predecessor, Tribloos 2 sticks to the same basic design, although the settings are different, the items you work with have changed, and there's a lot more variety as things progress. The graphics have received a major update, switching from a flat digital look to a deeper almost watercolor style. It works very well for the settings and looks great in motion, too. The game also has a nice quirky sense of humor that'll give you a laugh or two, not to mention a few exciting events like piloting an airship with tribloo workers!

The Tribloos 2 is a casual simulation game done right. By dropping the well-tread overhead perspective and focusing on a few refined gameplay elements, it sticks to the basics and does them very, very well. Expect an extremely entertaining set of over 100 levels, a number that includes several bonus stages as well as challenge levels. Also expect to get a good mental workout as you sit and analyze resource log jams and turn yourself into a little administrator person!