Pesky gods. Just because your civilization is teetering on the edge of ruin doesn't give them the excuse to come stumbling along and demand that things change. But this is just the predicament the ancient Egyptians find themselves with: unite, or be destroyed by Amun-Ra. The way to unite the people, apparently, is through architecture, a strategy conveniently suggested by the royal architect. Meanwhile Hatshepsut, the only female pharaoh, has to step in charge of the kingdom as her nephew is too young to rule. But all the hard work will be done by you in the cerebral simulation game The Timebuilders: Pyramid Rising. 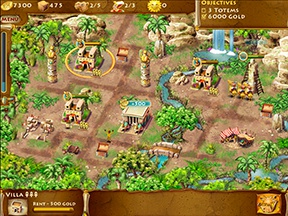 As a game, The Timebuilders is very much like Royal Envoy: a mash-up between real-time strategy, speed playing, and puzzle solving. Money is produced through rent generated from the three types of houses (each in turn can be upgraded three times), while stones come from the quarry. It takes stone to build and money to mine stone, as well as upgrade the workers and hire more help. There is a bank to help increase rent, a marketplace that exchange stone for cash, as well as a port - a great place for all kinds of bargains. Beyond that are monuments that bring happiness to the people (but do nothing else) and specific types of monuments that are specific to a level (for example, a temple of some type).

Each level is represented by a series of paths and specific spots to build certain things. Blocking the paths are nomads (requiring a bribe), piles of rock (a bit of hard labor for your workers) and crocodiles (spooked by camels and elephants). You also encounter thieves who try and run away with your heard-earned gold. The trick is to build the right things at the right places and right pace in order to reach the level goals. 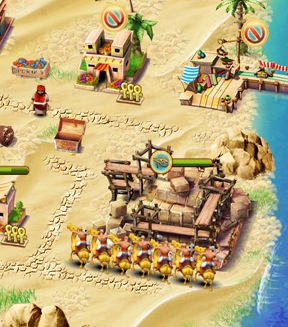 Analysis: If you are a newcomer to this genre, expect a fast-paced game where you have to think on your toes. You have to instruct everything — from collecting rent to building new places to hiring the help and upgrading them. A lot of the strategy comes in choosing which building to erect when, as they affect your fortunes differently. It is rare to find a level that has only one way to complete it — most expect you to try a strategy and see if it gets you that golden scarab. It's quite frantic, but done very well in this instance!

The Timebuilders: Pyramid Rising is very nearly a carbon copy of similar games in the genre, but salted players will notice several small improvements worth taking advantage of. For example, workers will run to the closest job if they aren't occupied. It might seem like a small thing, but it makes a big change in how you play the game! Expect about five hours of playtime from Timebuilders, more if you go for the gold in each level.

Finding the quickest way to the objectives is challenging and the game holds your hand initially. The start of my game map is decorated with countless golden scarabs (celebrating my obvious managerial genius). But soon enough they start drying up and the last fifteen level were total deserts, with me ending up way behind the golden time. What does that mean? It means I'm going back and trying again! Games like this do have a tendency to hook you, but The Timebuilders adds a veneer of complexity that spices up the challenge. And that stirs it up to be a lot of fun.

Decent concept, if very similar to a ton of other games.
Level 6 wouldn't complete for me, however.

I also had a problem with a couple of goals not getting crossed off after I'd clearly completed them. In each case, I restarted the level and got full success. Mildly annoying since it was only in the early levels, and not a deal-breaker for me. I would like to see people post some success stories for the later levels, along with info on how they did it. I'm baffled by a few of them and have no idea how I'm going to complete them in expert time...

I have this game on my iPad, and I get to level 12 and then the next level never comes up!! And went and did level 12 several more times, and then I deleted the game and re-installed it and I went through all the levels again only to find that it did it again!!! Does anybody know what to do??

To get past level 12 you have to buy the full version. There's no message to tell you this, but that's why it doesn't load.

How do i build fountains on level 14??