Poor Rosalee, what's a girl to do? She hears enchanted music, gets a mysterious request for a tarot reading, and the next thing she knows she's locked up in the town jail with her tarot cards missing. That's the opening for The Tarot's Misfortune, designed by Triple Hippo, which is, frankly, pretty much an average day (or night) in an adventure/hidden object hybrid.

Rosalee feels pretty much worthless without her tarot cards. But wait! Scattered amongst other objects in the room are a few of them, as well as other useful items she can collect to bust her way out. Unfortunately, once she makes it out, she finds a deserted town and evil afoot. Time to wander around and find some objects! And solve some puzzles, and play a mini-game or too as well. Oh, and rescue both the town and her precious cards in her spare time. Never mind the evil magician who has caused it all, he probably won't get in the way... 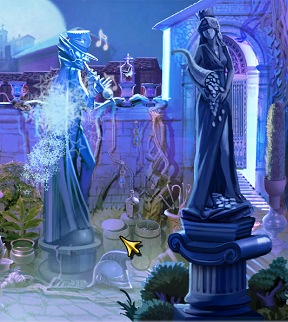 Gameplay is pretty standard for an adventure/hidden object game. Each scene begins with a list of objects to find, some of the grayed out to indicate that something must be done in order for them to be uncovered. Some items are useful and go into the inventory for later use, some will help protect the heroine (that would be the magic tarot cards), and some are just odd. Rosalee must wander in and around town to find her cards, discover what has happened, and attempt to rescue her neighbors from being unwitting slaves to the downright nasty magician who has caused it all.

The cursor will change into gears when passed over an item that can be manipulated in some way, and will change into a directional arrow when it goes over an exit to another scene. An arrow with a lock means that it is a way out, but cannot be used until something is solved. A fun dynamic is the "scrolling" hidden object scenes, where the player must move around the space from left to right to see the entire scene and find all of the objects. A handy scroll bar can be used for this, as well as simply moving the cursor to the edge of the area. Watch carefully when scrolling; these scenes have a foreground, mid-ground, and background, and they move in conjunction with the scrolling, occasionally blocking the view of necessary items.

Although there are plenty of puzzles to be solved, many of which involve a lot of traveling back and forth between scenes, there is only one type of mini-game to be found. Look carefully around the area for a face-up tarot card, clicking on it opens the "find the differences" mini-games that give clues to be used later on in other scenes. There's a rapidly refilling hint timer that is helpful not only in the hidden object scenes but in the find the differences scenes as well. Puzzles can also be skipped with a refilling timer.

Warning: Some people have experienced errors when attempting to start The Tarot's Misfortune. Although BigFish has issued a new version, it still would be best to check out the demo first and see if there are lingering problems. If there are, please report them to BigFish's customer support, who respond quickly to technical problems. 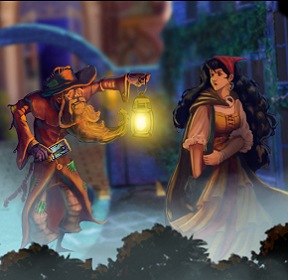 Analysis: The Tarot's Misfortune is a classic hybrid, containing both a lot of hidden object goodness and quite a bit of wandering around adventure style. Solving certain puzzles will involve lots of wandering back and forth until all of the items needed can be found. And unless you've uncovered the hints given by the find the differences puzzles you may have some difficulty deciding exactly what needs to be done to unlock new areas.

The game is done up in a pretty, hand-painted style that is easy on the eyes. Appropriately spooky music and sound effects add to the experience as Rosalee wanders around the eerily deserted town at night, creepy mist almost obscuring almost everything. There's lots of eye candy to be found, especially in the over large scrolling hidden object scenes as you pan back and forth over the detailed environments.

Gameplay is pretty standard, although the puzzles are on the easy side. The "find the differences" games range from quite obvious to very subtle differences, and everything in-between. With 12 chapters separated by cut-scenes and tarot card readings (each chapter holding multiple locations), there's a lot of easy casual gameplay contained in The Tarot's Misfortune. Perhaps too easy, as the puzzles are definitely not rocket science. If The Tarot's Misfortune suffers from any flaws, its most noticeable one is the phenomenon of ever shrinking gameplay. Even with 12 chapters some players might be done in 2-3 hours. Another minor annoyance is the laying of hidden objects extremely close (and sometimes in) traveling or puzzle hotspots, causing the player to sometimes move to the next scene when simply trying to pick up an object.

If you like adventure and hidden objects, however, The Tarot's Misfortune is a fun little game with its scrolling gameplay and lovely visuals. While not groundbreaking, it's charming and fun to play, and a solid title in the genre. What are you waiting for, another tarot reading? Go help save the town!