The Tale of Doris and the Dragon

[Note: This is the first installment of a planned series, with other episodes planning to be paid downloads!]

You know, you wouldn't think death would be so complicated, but Doris finds herself having a right bit of trouble as she tries to pass on in the afterlife. Apparently, she didn't get the leaflet on her way into this odd limbo-like world, but after befriending a dragon named Norb and having a trusty trolley with her, things are looking up. In Arrogant Pixel's new point and click adventure game, The Tale of Doris and the Dragon: Episode 1, Doris only wants to find her husband and move on into the eternities, but a mysterious group is attempting to use this aged adventurer for something far more sinister. Click and hold on people or objects to view a menu to choose "look at" or "interact", and just click anywhere to make Doris walk to it, with your inventory dropping down from the top of the screen when you mouse over it. This retro pixel art game will have you remembering the fond days of games like King's Quest and Quest for Glory, and if you don't have those memories... well, The Tale of Doris and the Dragon will help you get a feel for what you missed. If you're interested in more, check out the official site for news on upcoming episodes! 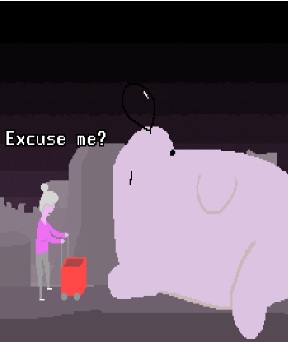 Doris stands out in this tale because unlike most heroines, she's old. It makes for an interesting mix of adventurer and character development. Our girl still has plenty of spunk to her and she's not weeping over her death the whole time. While it makes things more unique, Doris does move a little slowly as an elderly person, though the developers have responded to feedback and increased her speed. It's a little easy to get stuck as exits to other screens aren't always obvious. Thankfully though when you do see the transition arrow, you can double click and pop into the other screen much quicker. Other than the weaker mechanics, this game truly stands out with its interesting characters such as Norb, who is basically a glorified secretary, and even the ferryman, who keeps a small garden on the side to keep from getting too lonely. The Tale of Doris and the Dragon is sure to be a fantastic series and with the developers listening to the players the next episode is sure to be even cleaner and grander. But for now we can only enjoy this small part of Doris' odd little adventure she calls death.

Play The Tale of Doris and the Dragon: Episode 1

This game was cute and quirky, until

trying to play the tune on the ribs

May have quit in frustration.

Similar feelings, hate these types of puzzles. Nice game up until then though.

I always play my browser games on mute, so I don't even know what the deal with the ribs is. So I too stopped there.

For anyone having issues with the ribs

Any tips on getting past the sleeping pink thing?

never mind. i actually got past it right after posting. now i am stuck after playing the ribs. What do I do now?

Use the Marigold on the stomach acid, then use the skeleton arm on the ribs in the order of the music. The rib order is in my previous comment.

It would have been fine

if the notes had the exact same sound, or there were some colours/symbols to assist with the order.

If you have completed playing the ribs with

the skeleton arm you got from the stomach acid

then all there is left to do is

take the coin to the ferryman and then wait/buy part II after the cut-scene.

It was a cute game, but not enough to make me want to purchase the next instalment.
Compared to um... the two guys who sort of time travel through the alien doors instead of sitting on their couch... the gameplay isn't as polished or interesting to make it worth playing it for the humour (or that other humorous game in that brown hotel type place. I'm terrible at describing games).

get the coin back from the demon? I got past the ribs part already, but it didn't give me the coin back and there's no way to interact with him anymore. I still have the marigold, arm, and music box in my inventory, but I can't figure out what to do from here.

@ccruf3
That stumped me too.

The demon no longer has the coin. You need to inspect at the items in your inventory. ;)

The slow movement and awkward interaction with objects is too annoying to make me want to continue. Maybe if she had some kind of transmat unit to jump back to places she had already been before it would be a bit less tedious.