The Silent Age: Episode One

The Silent Age: Episode One from House on Fire is built like a classic point-and-click adventure game. It goes to extreme lengths to keep everything as crisp and minimalist as possible, reducing the controls to quick taps and pouring on massive amounts of attention-getting atmospheric details using just a few sound effects and some subtle gradients. But it's that stark simplicity that makes The Silent Age such a fetching game, one that will have you eagerly awaiting future installments! 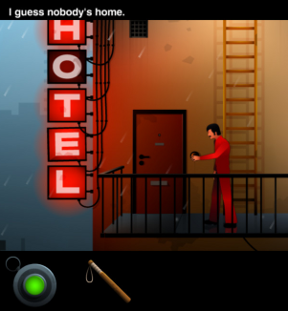 It's the early 1970s and Joe has a pretty crummy job as a janitor in a large, faceless government building. One day the management calls him in for a talk. It looks like Joe is getting a promotion! And by promotion we mean Joe will now be cleaning the sub-basement laboratories in addition to his normal duties. New keycard in hand, Joe heads down the elevator, only to discover drops of blood and a dying man who claims to be from the future. Promotion, indeed.

All you need to do to investigate Joe's world is tap on anything of interest. Joe walks on his own and will even run if you do a quick double tap. Inventory items and conversations are all handled in a similar manner, so you don't have to worry about picking the appropriate action verbs to get things done. Just tap and go! Joe's super-useful instantaneous time travel device lets him swap back and forth between time periods with a tap of the screen. Most of the game's puzzles revolve around switching time periods, interacting with items or grabbing something important, then switching back and putting those discoveries to good use. 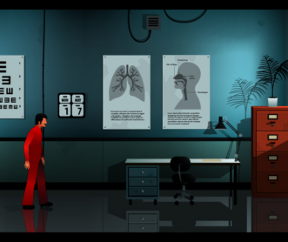 Analysis: The Silent Age is a beautiful game. Not in the "OMG how did they make those graphics?!!" sort of way. This is the kind of beauty that comes from delicious artwork, phenomenal sound design, and fantastic writing all coming together to set an unbeatably intriguing atmosphere. Helping the unassuming hero Joe prevent a mass extinction simply by being an average guy couldn't be more riveting!

The Silent Age isn't a fast-paced game, but it isn't overly wordy, either. It's filled with a surprising amount of empty space. Even when lots of things are on the screen the game still feels empty. It's not that there isn't enough to interact with or that the environments are underpopulated, it's just The Silent Age making sure you feel confused and alone, just like Joe. The pacing is quite good, and as the game suggests when starting up, the experience is even better with headphones.

The Silent Age: Episode One is, as you could probably tell, only the first part of the story. Episode two is currently in the works, though at the time of writing no release date has been announced. There's enough content to fall for in the first episode, and the experience will keep you occupied for a good hour or so. It's a bit like Kentucky Route Zero in overall design and emotional impact, which is definitely a positive thing. Basically, The Silent Age is really really good. One of those rare releases that's more of an experience than the simple label of "adventure game" could ever hope to convey.

The Silent Age: Episode One Walkthrough

The Silent Age: Episode One Walkthrough

A very good mobile point and click game. The puzzles could be harder, but this is one of the few free adventure games I've played on IOS that came off very clean and with a decent story line and polished coding along with some fun puzzles. Highly recommend it and they'll get a couple bucks donation from me for the 2nd installment.

As I said, fairly easy game altho this might stump you for a bit in chapter 4(due more to the only bad coding spot then the puzzle itself)

So that was the only annoying part of the game.

And fyi - double clicking will make you run

Hopefully the next installment will bring more of the same but with harder puzzles and perhaps implementing the combine items solution puzzles as well.