Being a member of a secret society is not the easiest gig, let me tell you. When they're not being accused of harboring Jack the Ripper or fending off a demon invasion, some secret societies appear to be dealing with the ever-present threat of one of their own suddenly going all Dirty Harry on them in a personal quest for power or vengeance or whatever comes to mind. Do cool robes, snazzy secret handshakes, and a kicking snack bar make up for all the trouble? Well, the latest adventure hybrid from Sunward Games, The Secret Order: Masked Intent... doesn't really aim to answer those questions. Sorry. 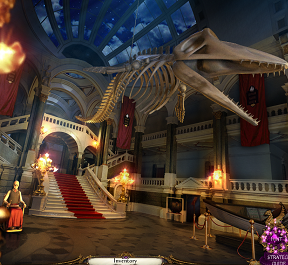 The story begins with one member of the Order of the Griffins deciding right in the middle of his super-secret initiation ceremony to betray them. Fortunately one of the unlucky members of the inner circle manages to call his daughter Sarah and leave a message before he meets his messy fate. Sarah must then hurry and find some sort of mystical, magical counter-balance to the enchanted mask that the bad guy, evilly named Nathan, is using to wipe out the order and maybe take over the world. Pretty soon she's uncovering a 17th century sailing ship that can also travel through time and she's off to find some way to defeat Nathan before he can unleash his badness upon what is left of the Order of the Griffins. Pretty standard Friday night stuff then, really.

The Secret Order: Masked Intent plays like a point-and-click adventure with some fun mini-games and puzzles as well as the standard hidden object scenes present in most of today's hybrids. If you don't like finding lists of objects, though, each scene can convert into an amusing game of Mahjong instead. Aiding in your quest is a map, found in your handy notebook, which lets you see where things need to be done as well as providing instant transportation. A refilling hint timer is useful within the main adventure as well as the hidden object scenes, and doubles as a skip feature for the mini-games. Using these items and your wits, can you retrieve the magical scepter needed to counter Nathan's grab for power? 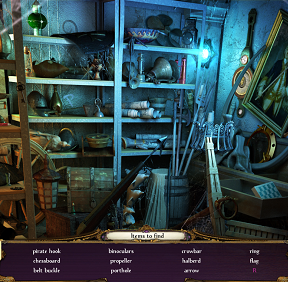 Analysis: The Secret Order: Masked Intent is pretty spectacular in all aspects, visuals, music, animations, and gameplay. The developers have decided to present a game with a suspenseful story featuring some interesting characters and solid puzzles in a nice balance that provides a lot of entertainment. Even in a market overcrowded with stunning graphics The Secret Order: Masked Intent stands out with its vibrant, sharp, three dimensional scenes, to say nothing of the better-than-average voice acting which brings the animated characters to life. Of special note are the great cut-scene animations, mini-movies which keep the story moving and are an enjoyable treat to break up the adventuring.

Of course, it's not quite perfect. The hit-detection areas for hovering the cursor or actually clicking on an object can be a tad tight, and of course attempting to navigate backwards while the inventory is up can cause chaos as both zones occupy pretty much the same real estate. These are minor flaws that don't dampen an otherwise entertaining experience.

Great care has gone into the design of this gem of an adventure game and it shows everywhere in the details. The ability to turn the hidden object scenes into another minigame is a nice touch, as are three modes of play to match a variety of skill levels, and a hefty amount of gameplay whether in the regular or collector's edition of the game. For an exciting adventure sprinkled with some pretty tight puzzles The Secret Order: Masked Intent is definitely the way to go.