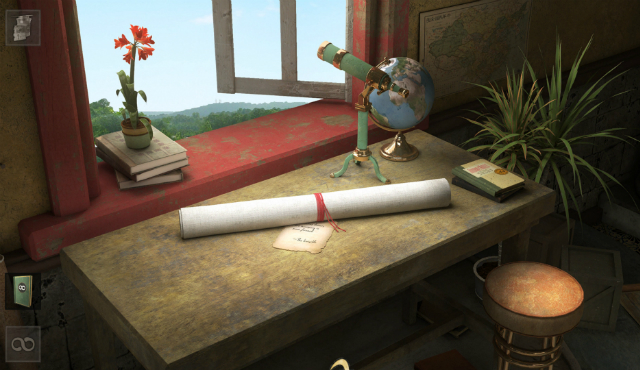 A letter, sitting alone on a pedestal on the landing of a spiraling marble staircase. There is nothing around you but darkness and you sense that you are somewhere else, someplace unreal and unknowable. Let the art guide you where it wants to go, the letter reads. Listen...

The Search is a first-person, point-and-click puzzle and adventure game created entirely by the one-man team of Jason Godbey, a 3D artist. In it, you, a painter voiced by the delightful and well-beloved Cissy Jones of Life is Strange and Firewatch fame, are transported to a world betwixt, lingering somewhere in the liminality between the conscious and subconscious after somehow losing your way with your craft. Strange ticket machines act as portals to new places: a charming, European-esque side street, a misty, quiet forest on a hill, the sprawling interior of a grand manor, a strange, pitch-black otherworld. An unseen guide, identifying itself as only The Invisible, leaves mysterious letters for you to find and use in your quest to complete a series of puzzles that linger on the introspective and ask players to confront the deepest parts of themselves. At its core, The Search is a treatise on art and the self, both of which, it asserts, can be easily lost to a sort of modern listlessness it calls The Wasteland. Utilizing a canvas, paint, and a paintbrush, along with a curious, old-fashioned camera and lighter, it's up to you to solve the puzzles in each location, taking heed of The Invisible's advice to help you along each step of the way. Are you listening? 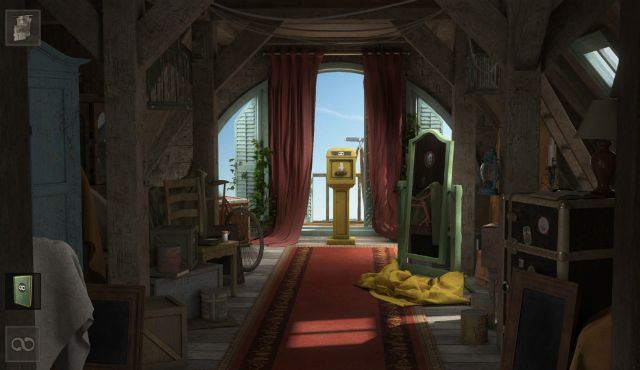 As a puzzle game, The Search shines as a wonderfully conceptual homage to other first-person puzzler greats, such as Myst and Riven. Players familiar with their simple click-to-move control schemes will feel right at home; movement in The Search's elegantly designed three-dimensional space is easy to navigate as each puzzle room is relatively small, which prevents the player from ever getting lost. Though not a hidden object game, I still couldn't help but be reminded of my many hours with old favorites, such as later entries in the Mystery Case Files series. In each level, there's often a card posted on a wall with locations as to where players can find the necessary paint can, paint brush, and canvas needed to complete the level's puzzle, leaving the task of finding these items otherwise up to them. Some levels play on this in fun ways, such as tearing away a piece of the card and leaving players entirely on their own to find certain objects tucked away behind secondary puzzles or in places they might least expect to find them. Sharp eyes and a readiness to explore are required for success, as each level has at least one, if not more than one, hidden object or scene that must be photographed with the in-game camera, a part of something the game refers to as The Process, producing a curious polaroid that serves as the key to obtaining the correct paint color required for a level's completion. I greatly appreciated just how effective the game is in its simplistic puzzle color scheme, as later levels will often keep your inventory full of multiple pieces to various puzzles, though colorblind players may struggle to differentiate the blue, red, and green puzzle pieces from one another. Thankfully, however, the inventory also manages itself, and puzzle pieces that have no second use or purpose will disappear, keeping things neat and streamlined.

The Search's overarching narrative is a thoughtful one, but one I found to be the most subjective aspect of the experience for many players. For a game that emphasizes listening, I, somewhat ironically, found that I enjoyed the overall experience the most with the protagonist's narration turned off (though it's worth noting that I played The Search's demo first, which has no narration and no journal, which certainly affected my opinion). To Godbey's immense credit, however, I greatly appreciated how much control The Search offered by way of its settings and I personally found that I had the most immersion and enjoyment by turning off the narration and the clues. The notes left by The Invisible are somewhat obtuse, but I found them to be just the right amount of vague to keep me thinking and guessing as I moved through each puzzle room. While I also love Cissy Jones and think her acting here is superb, as it always is, I thought some of the narrator's philosophic asides and ruminations on The Invisible's guidance to be almost too literal, as if The Search was simply sitting down and telling me exactly what I should be thinking at each part of the process. This is not, by any means, a hard and fast criticism of the game as a whole; I think many might really enjoy the protagonist's narration and I too found many of its quotes and musings on scholars like Carl Jung and Joseph Campbell to be thoughtful and informative, especially for those who have never been exposed to the sort of thinking The Search asks of its players. Indeed, what struck me at first as a weakness is a commendably a strength in its own right, as The Search offers a variety of means with which to engage its players just as it smartly gives its players the ability to meaningfully alter their experience in a way that allows them to embrace and enjoy the game to its fullest.

The Search is not incredibly difficult, nor is it incredibly long, clocking in at around an hour or two, but as a puzzle game and a solo-venture at that, there is an incredible and impressive amount of love and polish in every moment. I was surprised, repeatedly, by several clever twists and turns (have you found the hidden ticket machine, perhaps?), and regretted only that there wasn't more of it to play come the end credits. I could easily and gladly exist in The Search's liminality for hours longer, in its lovingly designed and beautifully rendered levels, its gorgeous, thoughtful soundtrack, and curious, otherworldly atmosphere.

It appears some (or all?) of the links are directed toward The Witness. I think the intended link is here: http://store.steampowered.com/app/566190/The_Search/ (until you have a chance to chaneg them). Cheers!

Weird, not sure how that happened. Thanks for the heads up! I'll fix it now.

**WARNING** For WIndows users, the game requires a 64-bit version of Windows to play. I learned this after downloading the game and then Steam only to get this error message. Now to go through the throes of applying for a refund. Would have been nice to know this before I went through the motions. I so wanted to play this game.
*sigh*

At the end I had only completed 2/3 of the objectives, but saw no way to go back to figure out what was missed. It seems the only option is to start anew and hope that everything is found. That I found frustrating.

Also available on itch.io for those who would prefer a DRM-free copy:
https://jasongodbey.itch.io/the-search