Praise Chernobog! He watches over us and tolerates our presence on the bountiful island through his grand benevolence. The five families have grown strong and powerful through his influence, and even the common rabble can feel his blessing upon us. He has granted us so much, and if keeping him pleased requires an iron will to do whatever is necessary to protect the village, its secrets, and life itself, well then you have. After all, he asks for so precious little... The Sacrifice is an island management simulation game developed by foxboard for Ludum Dare 33 under the theme of "You Are The Monster". In it, you'll have to make the tough choices, if not for the greater good, then at least because no one else will. 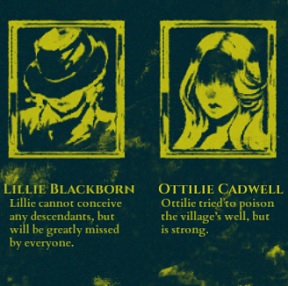 Life in The Sacrifice is based on four main attributes: Food, Shelter, Happiness and Secrecy. You should seek a balance in each of these: let one get too low, and Chernobog will be displeased. During each season, you will select each of the five ruling houses of the island and assign them a task to focus on, typically related to gathering food, building shelters, or raising morale/deflecting suspicion. Each house has a job they are specifically suited for, but again, it's all about keeping things running well overall. Following each season comes the titular sacrifice: each house will put forth one of its members that it considers... expendable. Should they soon mysteriously disappear, their loss could very well effect the effectiveness of each of the houses, let alone the state of the whole island. But sacrifices must be made. Admittedly, it is not certain if there is a win condition (or at least I wasn't able to reach it), or if it is merely about surviving as long as you can. Also, some of the effects of choices on various stats are not always clear. So yes, if what you're looking for solid mechanics in island simulation, Virtual Villagers might be a better choice. But where The Sacrifice excels is atmosphere. It's a game that lets you step into the shoes of a group of people who crossed the line long ago, and need to keep stepping further to prevent even worse possibilities. The music and visuals have real weight to them, leaving the player haunted even as they calculate the cold equations required to keep things afloat just one year more. The Sacrifice hits hard with its banal evil, and we can only hope it will see expansion and refinement in a post-comp release.

Get the free full version

Get the free full version

The presentation is great, and the message is clear, but I don't think it's informed or reinforced by actual mechanics.

You make choices for production during the season, then when you end the turn you see the results of those choices. Your values in Food, Shelter, and Happiness visibly increase or decrease to some value.

Then you have to do the thing. Rarely, this choice will increase Secrecy, but usually it does not. However, regardless of what happened the previous month, just about every value will be below what was reported previously. Thus, any 'gains' that you perceive by production choices in the previous month don't stick. It doesn't matter because all the values mysteriously decrease. In my experience, you can't last more than 5-6 turns due to this mystery decrease. It's not even really explained. Most of the village is 'saddened' by any losses, but that can't mean that they lose more shelters overnight.

So the village is doomed. Yep. Cool. I'm wondering if this is supposed to be Spec Ops: The Line moment. "Why are you even here, playing this game about terrible choices with no chance at redemption or even explanation? You could always put it down and not play it."

I wonder if there is anyway to win?

I noticed that sometimes, a certain family will comment on his plan to save them. Perhaps there was intended to be another ending that didn't make it due to the competition time limit.

I tried intentionally sacrificing people who support or favour Chernbog (eg. "Name is rude but is blessed by Chernbog"), but didn't seem to change anything (and the family stopped mentioning the plan and went back to hailing Cherbog)