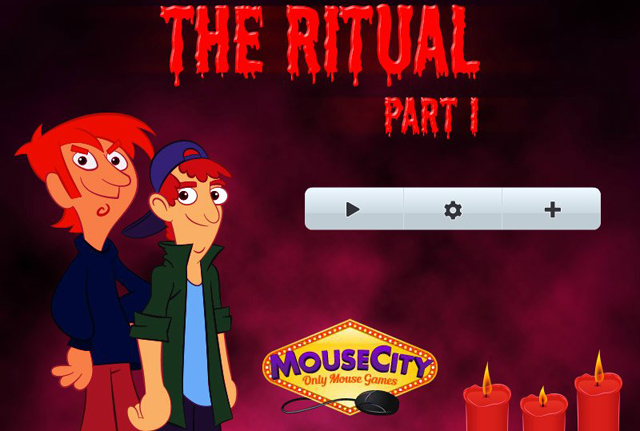 Have you ever had the experience of an impending feeling of dread after taking an exam? That lead weight in your stomach telling you that you probably flunked? One course of action might be to study better for the next exam. But if you're Gideon, you have a friend Joe with a far more radical solution: summon a demon to do your bidding and make your teacher, Ms. Rage, give you an A+++ on your exams!

Carmel Games delivers their usual mix of colorful graphics, wit, and puzzles in The Ritual - Part 1. You'll need to think outside the box, pillow, whatever, to track down the three needed ingredients and summon the demon. And if this just isn't enough for you, well, stay tuned - rumor has it there is a part 2 along the way!

I had too much fun modifying that one inscription to say different things.

Ms. Rage is grading your papers at the moment, and if even angels can't save your failing grade then maybe a demon's what you need. Collecting the ritual ingredients is the difficult part, but you'd do anything for that A+++.

Joe wants you to get him a piece of red chalk, a sulfur-scented candle, and graveyard dirt. You'll have to look all over town to get them, but let's check the hideout first.

The wardrobe on the left needs a three-digit code to unlock. The digits are marked on (some of) their sides with plus and minus signs.

Examine the game board on the wall. I guess it's hanging there because nobody's interested in super short games of chutes-and-ladders. The 12 squares on the board are actually puzzle pieces.

Take the pot from the shelf.

(Leave through the door on the right to view the map.)

From left to right, the locations are the school office, candle shop, hideout and cemetery.

At the moment, Ms. Rage appears to be fiddling with her diary rather than marking papers. More time to summon demons!

There are various objects in this room: a water cooler, a cake, a piece of red chalk on the table... but you can't touch any of it because you're not allowed in here, and who knows what mayhem will ensue if you get seen.

There is one thing you can do here: read the message board, which has a note announcing the new office phone number.

We could buy a sulfur-scented candle for $1000... no, that's not happening. Instead, the shop owner will also accept a fluffy pillow to sit on in exchange for the candle.

There's a phone here, but we don't even have a quarter to use it.

The caretaker won't let you through the gates, probably because you're trying to dig up some graves. He's looking for his chocolate cake. Maybe he'll help you if you find it?

Take the coin from the ground next to his counter.

Examine the dirt on the ground. It's not graveyard dirt, but you're sure it's useful in some other way.

Take the garbage from the trashcan. Great, now you're gonna be carrying that stench around.

Mayhem in the office

Go to the candle shop, use your coin on the phone, and dial up the school office.

It turns out that only Ms. Rage is in, and she's going to have to walk all the way to the phone and back, leaving her desk unsupervised.

Now that you can get in and out of the office without being seen, you're free to drain the water cooler in the pot, steal the vanilla cake, and grab her red chalk.

What did you have to do again?

The digits correspond to the numbers on the puzzle pieces, with the + and - signs representing the shapes of the piece edges. A missing sign on an edge indicates that that piece has a straight edge in that direction, so that the middle digit is the number on the bottom middle piece.

Enter 529 into the wardrobe, getting a pillowcase.

That's just the pillowcase, where do we get filling?

Fill the pillowcase with the garbage. It's way too smelly to give to the candle shop owner, so chuck it in the washing machine.

Half an hour later, you have a fresh(?) pillow, which you can trade with the candle shop owner to get the sulfur candle.

The one we have is the wrong flavor for the caretaker. Not that the poor man's old tastebuds would know...

Pour the pot of water over the dirt, turning it to mud, and then use the cake on the mud, coating it brown.

Give the caretaker the "chocolate" cake, and he lets you through the gates into the graveyard.

Dirt everywhere, and nothing to pick it up with! (Why didn't you keep the pot?)

One particular tombstone stands out in the light: "If only I had more TIME". It has a four-digit lock under that inscription.

Hint: If you're looking for only one clock, you're never going to find it.

The four flagstones leading up to the grave have notches in them, on their left, bottom, right, and bottom sides.

Enter in 9636, and the tombstone opens up. Take the bucket and fill it with dirt from the middle grave.

You've gathered all the items, so give them back to Joe and watch him summon Negaton.

But you're still not getting that A+++. Maybe next time.

Also, part 2 is up at the Carmel Games site on Mouse city.