Peace! Houh! What is it good for? Well, something apparently, as the various factions of Berzerk Studio's new defense shooter game, The Peacekeeper, want it, and are willing to slaughter everything in their path to get it. You play as the titular Peacekeeper, stationed in your Peace-Ditch as the last member of the Peace de R�sistance, to ensure that your enemies don't show up and hog all the peace. Point and click to fire at the waves of invading enemies. You'll duck down into the ditch whenever you are not firing, so defensive timing is of the essence. Likewise [up/down] and [W/S] will roll you around the ditch to avoid more close-up weapons. Killing enemies and completing achievements grants you cash, which can be spent on upgrades in-between waves, including special weapons activated with the number keys. Complete all thirty waves of the campaign without becoming a member of the Peace-Corpses, and the bonus Endless Mode becomes unlocked. 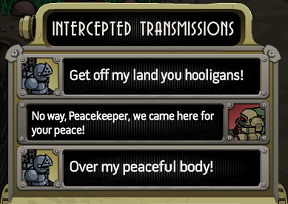 A visceral burst of just-mindless-enough entertainment, The Peacekeeper is a bloody good time. Both lasers and limbs will be flying all over the place as you plow through ALL the bad guys, and the Time Crisis-like cover system adds a natural and intuitive peace of strategy to the carnage. Round about the low-twenties, the waves start getting a little repetitive, but the humor in the enemy chatter should keep andrenaline junkies going up to the killer final boss. In short, for fans of over-the-top action, The Peacekeeper is definitely a piece that's a keeper.

(And if you want to laserblast this reviewer for typing that last sentence, he totally understands.)

Played this game in browser, then on my phone - it just plays so well. I'm always impressed with Berzerk Studios' games. It's peacein' AWESOME!!

the AXE-ual question is,what IS wrong with the game other than a little repetitiveness?

Letting you keep the cash from levels that you fail = a good thing. Thanks developers!

Good game overall, but i find the cash system to be a little bit slow. I am glad they give you money after each defeat though.

Great game, addictive and challenging at times, I got to wave 84 and there's so many enemies that my phone actually starts to glitch, so I can't get passed that. That's the only thumbs down in my opinion