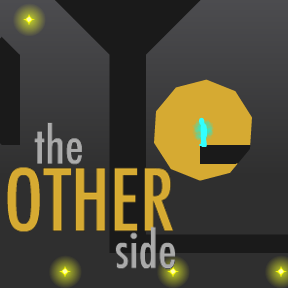 There's nothing I like more than seeing a game followed up by a thoughtful sequel that takes the series in a new direction while still maintaining some of the original's integrity. Hollywood may have shied away from this trend these days (how many Jaws movies have been made at this point?) but that doesn't mean we don't get a good sequel in the indie gaming community every now and then.

The Other Side, a new puzzle platformer from developer CoolioNiato, is the next game in the series apparently started by the recently-reviewed One Step Back. This time, your goal is to collect golden sparks around each level. Collect all of them and the door will open to the next level. But you played One Step Back, and you know it's not that simple. After you gather your first spark, a golden aura appears around your character which reveals hidden platforms and walls within the bounds of the aura. Later on in the game, this aura can be turned on and off by pressing the down [arrow] or [S], depending on your control scheme. The Other Side doesn't present you with any enemies, but you can die by falling off the screen. Oh, and did I mention that the levels turn when you move onto slanted walls? Well, they do, so prepare to get a little dizzy.

The Other Side is packed with ideas, but manages to be a lot more brooding and relaxed than its predecessor. Once again, we have smooth platforming that has one evident flaw: it's pretty slippery. A few times, I would walk slowly off the edge of the platform and go sailing through the air with momentum that made it seem like I had run off the platform at full speed. Fortunately, this glitch isn't too difficult to overcome, and the rest of the game is well worth it. Though not all platforms and walls are visible, the game rarely feels like a scavenger hunt. The levels are laid out well enough that a few minutes spent hunting for the correct path often gives satisfying results. Much like One Step Back, the gameplay shifts towards the last few levels, which I will once again refrain from mentioning at the risk of spoilers. I will say that the impact of the shift is not so dramatic this time, but won't elaborate any further.

The atmosphere created by The Other Side is suitably melancholy; the levels are twisted, disjointed, and sometimes disorienting. The music is something straight out of a noir crime film, and the story, while perhaps a little heavy-handed, suits the game more than its predecessor. Once again, I have to point out the developer has created a real experience driven by all the elements of the game, not just one gimmick. Though it's not as innovative as One Step Back, it ties in well without feeling forced. Jaws producers would do well to take notes. Hopefully, The Other Side isn't the last game in this unique and creative series.

Play The Other Side

Love the soundtrack, hate the game. Why? That spinning is making me nauseous...

And that's why you shouldn't drink, especially while playing games, especially this one. @[email protected]

Simple little game, too short though. Was fun game play even if it did hose up my ancient CPU.

What an interesting (and thin) metaphor for drug addiction.

An interesting game, easier than its predecessor - I was able to finish this.

I'm in favor of any game that makes Pac-man cry.

(At least, that's what I saw at first in the pciture.)

I broke the game. On the title, use your light power. Go left on the slants until you are right beside the entrance to the game. You shouldn't be able to move. It only worked once for me though.

Much, much more enjoyable than One Step Back. Unfortunately there's still not much to it, though.

Anyone can post the whole passage in the game? I just can't remember all of them.

I found this to be enjoyable and atmospheric, but in terms of gameplay I think I liked "One Step Back" a bit better. The feeling of being chased by your ghosts fit the theme nicely and added an element of planning and even an air of menace when you found yourself trapped.

This one just seemed to easy; there were no threats, so you were free to wander each level at your leisure until you found your way to all the lights and then the exit.

There are some good ideas in this game but due to the above, it isn't one I'm going to play again.

I am stuck at the level in the post's picture and in the same place too. Can someone help me get to the other side?

I got through that level. Now stuck a bit further on ;)

Fabulous, I loved this.

@MdB agree all games should have music and fx mutes, but I reckon a save feature would lessen the impact of this one. the storyline and minimal presentation strongly suit playing through in one sitting, and it's a fairly short game.

WOW! this game is AMAZING! music is TOP OF THE NOTCH and the "cut scenes" (meaning the writing) is very curious... about the ending...

at the end it says something like "but whatever i say"... "dont trust me" and the dont trust me is in pink... so lets analyze this for a sec... the pink phase of the game is pretty much the orange phase, but inverted. so in the orange phase the things you see in the pink phase normally were "invisible"... so maybe the protagonist was making up or imagining the items from the pink phase (the ones he could only see with the orange light) due to medication or what not. (in one of the cut scenes it sounded like he was addicted to something). so maybe the message of the game is something like "dont trust your hallutinations or subconcious mind or maybe even imagination"... thats why the "dont trust me" was in pink...

woah, that sounded really confused didnt it... but tell me people, whats your take on this whole thing?

I really like the concept, but I found the controls a bit twitchy, especially the wall jumping. I gave up after trying endlessly to wall jump to the door one of the later levels. I think puzzle-heavy games like this one should not require so much precision in the movement of the character. It's frustrating to figure out the solution but not be able to do it because the controls are difficult to master. Really enjoyed it up until I hit my roadblock.

I did not think the controls were hard to master. I liked the relaxing music, no sound effects (unless I missed them), monologue, and the puzzle rooms presented. A short, enjoyable game.

Anyone have the transcript?