April's been dreaming, and not like you might expect. The young art student thinks her life in the grimy city of Venice is ordinary, but she's about to discover that there's more to the universe than anyone suspects. The Longest Journey by Funcom is a point-and-click adventure from late 1999, now available from Good Old Games. It's a cult classic tale of two worlds whose fates are entwined and endangered and one young woman stuck in the middle of it. After ten years, is this game still worth your hard-earned dollars? Short answer, yes. Long answer, emphatically yes. 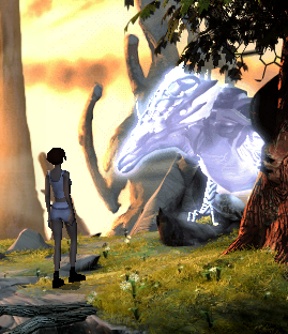 As the game opens, April can't spare much time for the outlandish nightmares she's been having; she's got a project due for an art show, she's getting some unwelcome attention from a neighbour, she's having trouble getting paid... oh, and then there's the cryptic man on the bench outside her boarding house who seems to know entirely too much about how poorly she's been sleeping lately. His claims about her destiny would be a lot easier to ignore if not for the magical glowing purple dragon in her dreams saying the same things. I wish I could have a magic dream dragon would send me on an awesome adventure, instead of wasting time dreaming about overdue bills or giant squid. (Both equally terrifying.)

The game is played with your mouse, clicking on people or objects to interact with them. The game will occasionally display several icons (hand, mouth, and eye) to let you choose how you with to interact. Click on an area to move there, or double-click to make April run to it. When speaking to people, you can hit [ESC] to skip through the current line of dialogue if you've heard it before. Right-Clicking opens April's inventory, and since so much of the game centers around item combination and puzzle solving (more on that later), you'll quickly become used to examining and using everything around you. Since April has the strange but helpful tendency to vocalise her every thought, you should investigate everything you can for clues and information. You can save your game at any time by opening the menu (clicking on the diary icon at the top of the screen), and you should definitely take advantage of this as dangerous situations can arise. 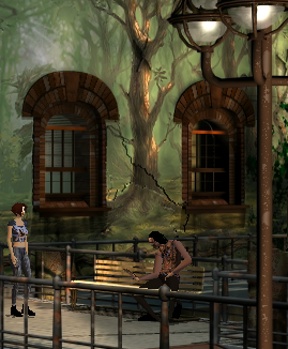 Analysis: I don't often get a chance to review games that I am genuinely excited about, so finding The Longest Journey available again after I first played it nearly ten years ago feels like a real treat. This is the game I've thought of fondly over the years, and more and more frequently with every short, samey game that parades across the market. Revisiting objects of nostalgia is always risky business, lest you find it doesn't hold up to your memory. (I'm looking at you, animated Dungeons and Dragons.) Happily, this is not the case with The Longest Journey, which is every bit as entrancing as I remember. It's not that the game's concept is exactly original, since the story of two worlds, one of magic and one of science, has certainly been done before. It's that so much effort has gone into maintaining quality. While by today's standards the game's visuals might look a little dated, especially the in-game character models, the presentation is top notch, with a rich soundtrack and largely excellent voice acting.

If you've played a point-and-click adventure game before, you're probably used to abstract logic. In fact, when I first saw the game on GOG, I thought, "Oh hey, that's the game with the inflatable duck and the sewer candy". The game's puzzles are memorable in part because they're just so bizarre. Most of them simply center around using the right item or combination of items in the right place at the right time, but figuring out what's required of you can be mind-boggling. The logic behind a lot of them is obscure enough in a few places to drive you to a walkthrough, and unfortunately, there's a lot of backtracking, which makes things more frustrating than they need to be. Mess around with them long enough and you'll eventually figure out the solution, but they're definitely more than a little out there in most cases.

The story behind the game takes a while to really get rolling, but The Longest Journey does such a good job of immersing you in your surroundings that it's easy to forgive. Since it isn't exactly an action packed title and you spend so much time talking to people, it's a good thing that what they have to say is usually interesting and frequently amusing. The writing is relaxed and natural so that conversations sound real, and the people you meet have a tremendous amount of personality. As the protagonist, April is feisty, cheerful, and instantly likeable, making an excellent guide through the high-fantasy story.

It's true what they say; they really don't make 'em like this anymore. Or at least, not frequently enough for my tastes. The Longest Journey isn't quite perfect, but it gets more things right than not, and offers up a long, engrossing adventure. Don't expect to finish this one in a day, or to forget it the day after you finish it. A quality game with a lot to offer, The Longest Journey already has a lot of fans; give it a chance and it just may make one of you, too.

I liked it because the story was nice, and the character development was just really, really great. I thought they really did a good job making April a real character and making you empathize with her like any good movie or game or story should.

I did, however, feel that it had a lot of that tortured logic adventure game syndrome going on, where eventually you'd give up and just start trying to USE everything WITH everything else until two things combined or worked. I can't remember them too well from a decade ago, but one that comes to mind early is

an inflatable rubber duckie and like forceps or something to retrieve something (keys?) from the subway tracks.

But overall I thought it was a good overall experience. It just seems like it would have made a better movie than a game.

Badly, GOG asks too much info to pay: they want all personal info including SSN. JIG should not, ever, recommend giving out so much personal info.

[Any personal information requested for the transaction will be from your card issuer, not GOG. For example, I had to prove to Visa that I was the cardholder, through the GOG payment interface. I had previously set up a password with Visa for my online transactions, such as this, and the Visa window that popped up asked me for that info. It was not GOG asking for the info (they couldn't have known what to ask me for). The connection is encrypted (evidenced by the https:// in the address bar) and I trust the people at GOG. The payment interface works well, and I have tested it myself with an actual purchase. -Jay]

The voice acting, the story, and the storytelling are all the very best the genre has ever offered.

GOG does NOT request any personal info from you beyond a credit card or Pay Pal. As Jay points out, Visa is taking certain security members and requiring you to prove to THEM (not to GOG) that you are the cardholder. GOG does not receive this information.

This was one of my favorite adventure games. It really made an impression at the time.

I tried playing the 'sequel' - Dreamfall - the longest journey 2 (though its really its own game) and it didn't capture me as much. Still quite well done.

Another great adventure favorite of my in this vein is 'Beyond Good and Evil'. Loved it.

Wow... I remember this. I'm only 15 years old,but I remember this game being handed together with a gaming magazine I'm still buying. Back then I couldn't even get past the first chapter.
Played it a few months ago, though. I got further this time, but still didn't have the time/patience to finish it. Seriously, people. GET IT. If you don't, you're missing one of the most beautiful adventure games ever made.

The Longest Journey is one of the best P&C adventure titles I've ever played, up there with MYST and Gabriel Knight.

I remember playing this game way back when. It was pretty much amazing. The sequel Dreamfall was also good.. but I think I liked this one more. A 3rd game was set up, but I haven't heard anything on it's production..

I played the sequel to this with my house mate and really liked it, even though it starts of a bit slow and ends a bit abruptly (trequel anyone?). I've been itching to try the first installment.

Thoroughly enjoying this... just wanted that due to a lot of back-tracking, double-clicking a destination or an action will make the progression less painful :)

Just curious: What is it about the game that earned it the M rating?

Hi Tesh! The Longest Journey gets an M rating because there's a fair amount of "casual" profanity (a few of the characters can be more than a little potty-mouthed if you choose certain dialogue options), some innuendo (some subtle and some not), and a bit of violence. I'd say about 70% of the game, if not more, could be safely rated Y (one step above G), but I wanted to err on the side of caution. You're not going to have people swearing at you and coming on to you every five minutes, but I didn't want to surprise anyone either.