This game reviewed a O rating due to pixelated blood and gore, and mature themes and horror.

The Game Kitchen's point-and-click adventure horror game The Last Door: Chapter 3 begins with a bang and a lot of heavy breathing, as following the disturbing events of Chapter 2, our hero wakes up in a coffin and stumbles out from the dank underground cell to find himself in an unfamiliar city. Everyone thinks he's just another drunkard as he stumbles through the dirty streets, lost in confusion and memories, and he can't figure out where the ticket he found in his pocket has come from. When night falls, however, he has more things to worry about than callous indifference, and the streets get even darker and stranger. To play, just click when the cursor changes to interact, and click to highlight items in your inventory for use on the screen. One of the puzzles is audio-based, but since the game thoughtfully comes with a closed captioning option, you can complete it even if you have difficulty hearing. In fact, the game comes with a lot of options to make things easier for all players, so make sure you check the opening screen to see if any of it applies to you! 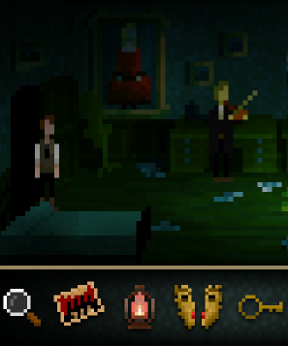 Chapter 3 feels a bit more tightly designed than its predecessor by being more adept at balancing narrative and gameplay, so you'll do a lot more exploring and puzzle-solving than having people yap at you. That's not to say the narrative is light here... if anything, this third installment provides a lot of interesting context to some characters and their relationships. It's just that the series also returns to more of the exploration and puzzle solving that the original leaned heavily on. None of it is what I'd call difficult, though it can be easy to miss things since the game's colour scheme is so dark in places as to make it hard to tell what you're looking at until you click on it. You're often given little direction when it comes to accomplishing tasks, so experimenting is a must... this is an adventure game, after all. You didn't think you were going to get out of it without rubbing that broken mask on everything from the paintings to that horse carcass to see if that was the key, did you?

As far as tone, however, Chapter 3 might be the strongest the series has offered, with an ethereal, otherworldly quality to the setting. It feels menacing, tense, and subtly wrong in a thousand unsettling little ways, and the jump scares (yes, again) are executed with more finesse. The sound design here is particularly excellent, which makes playing with it turned up a harrowing treat. The game ends on a big cliffhanger that sets a new record on the Creepy Meter, and the fourth and final installment of this first "season" will have a lot of work to do if it plans to answer most of our questions and provide any sort of closure. The Last Door: Chapter 3 is a superbly crafted adventure that's scary without resorting to a lot of gore and violence, so turn the lights down low and the volume up high, and let it raise the hair on the back of your neck.

Thanks to Celli for sending this one in!

Though Chapter Four has been released, it's currently only available to people who donate towards funding the next season in the series, though it will be available freely in the summer of 2014. We will wait to cover each chapter until you can play it freely. "Enhanced" versions of each chapter containing sharper visuals and translation options are available on the site. More information is available here.

Introduction - Escape and Explore the Rookery

Find a Way Out of the Fog

Introduction - Escape and Explore the Rookery

Find a Way Out of the Fog

I am pretty sure that the new layout is not ready yet for primetime. If you were to remove these pages "https://jayisgames.com/archives/_includes/entries/description-12631.php", it would make the new layout far better.

chilling and suspenseful as always! hints are easy to figure out if you use enough common sense but still a good storyline nevertheless! can't wait for chapter 4 :P

I am horror-movie vaccinated, so this was not as creepy for me as the first two. The disorientation theme was really impressive, though. The art overall was hit-and-miss until the

though that may be intentional with every space looking the same. I was dismayed to find a pixel hunt in a section that I'd automatically checked, but it may have been just me.

So I got mired in trying to play the game instead of experiencing the narrative. And the game by itself wasn't that interesting or mysterious. Instead of looking for solutions, I was just looking for physical properties of items. But again, that could go with the theme. Sort of.

I'd appreciate a more in-depth explanation of

Although I used the accessibility options to get over this machine's lack of sound, I couldn't quit follow what I was supposed to do when things were overlaid.

I think it wasn't so much whether the disorientation / labyrinth theme was clumsily done, because that's a great old trope that's rarely tackled well. It was more that I didn't really feel the obsession. I mean, it's *obsession*. This felt way too subtle. Obsession isn't subtle. It should sniff your hands and follow you home and live on your roof muttering about your eyes. That void kind of sapped whatever slow, turning screw that should have been the labyrinth. I was suitably lost, but my blood was not curdled.

It's about time JIG got a forum for feedback, game suggestions, community spirit etc.

Use the score to blow the feather out of the cage? REALLY!?

Dandy, the new site layout has been designed by Tatyana Orlovich (http://multadroit.com/) a good friend of Jay (they were at the same university). Tatyana has began to work on the website for Jay since a while so I suppose she perfectly knows the community spirit.

Don't worry Jeff, this site layout is very good. I like a lot the comments and the walkthrough on the game page.
And this page with the grey box for the game has really a better look than before. Maybe you forgot it but I do not see the box with the comments?

To come back to The Last Door: Chapter 3, this game is for me one of the best I played recently.

Unless I'm missing something the light switch button seems to have been removed from the new layout so you can't make the area around the game window darker anymore...this kind of ruined the game's atmosphere for me. I also find the grey box distracting.

Hello Shak82 & Ganx, you're right some elements are still missing. We will add them within next days.

There is a forum planned for use at some point in the future, and I hope people decide to use that as a way to deliver useful constructive criticism. :)

IlanIvasko, I feel you. That was TOTALLY the one place I got stuck myself and I had the same reaction.

I would have liked some sort of context clue in the description. Maybe something like "Rolled up like this, you'd be able to blow through the paper", and then the feather could say "Perhaps if you were able to blow it out" so you could make the connection through context.

I too was stymied by the score.

Did anyone else successfully navigate the fog using only sound? I couldn't manage to hit the right spot unless I turned the captions on, which is kind of a bummer. It hardly ruined the game for me, but it stuck out as one puzzle whose implementation seemed lacking.

When you click on the developer name, there are 4 entries for each game for some reason. One pointing at the review page, one for walkthroughs, one for comments, and one for I forget. Something's not working. I'm guessing it's got something to do with the new format, which I would also like to vote against. But I'll give it some time, maybe it'll grow on me.

Please use the support page to report issues with the site design rather than filling up the comments on a game. Thanks guys. :)
https://jayisgames.com/support/

I have music training, so:

1) I had no trouble with the lovely audio puzzle. In fact I jump in giddiness every time a developer throws one in, knowing that they are not too popular in this modern world of us that pays so little attention to careful and discriminating listening.

2) I knew immediately what to do with the score :-)))) OK, lying through my teeth here, I had to scratch my head a bit until it popped, but I think it is fine as it is and doesn't need any more explanation.

I like what these guys are trying here. Not the game itself, exactly, which is fine but not exceptional, but how they are trying to create a community around it.

Oddly enough I immediately figured out the feather puzzle...sort of.

Admittedly I thought Devitt would use the rolled-up score to reach out and drag the feather to the edge of the cage, but.... tomayto, tomahto.

Does this mean we have all four witnesses accounted for? Anthony, Father Ernest, Devitt, and Alexandre?

These games are incredible, I am such a fan. This is one of my favorite indie game series ever, the puzzle difficulty is perfect for me and I love the storytelling. GREAT job to The Game Kitchen team. I can't wait for the free version of Chapter 4 to go live. Hope this series has many parts to come!

My only nitpick with Chapter 3 is how slowly Devitt walks in the dark segments/with the lantern. The walking pace in Chapter 2 was definitely the best.

I agree with you on the walking pace, Laura. I know they were trying to build tension, but after the first pass through a room, all it does is make you go "uuuuugggggghhhhh". :)