In Jay Armstrong and Jimp's action-packed platform shooter The Last Dinosaurs, the dinos aren't extinct... they're just hiding in sewers from the evil feline army, naturally. Clever girl. As Russ, a dinosaur who looks like Reptar and was probably trained by John Woo or Danny Butterman, you'll amass a team of heroes and go on arena-based missions from your secret underground hideout... missions which typically involve bouncing all over the place and firing guns into the air while going ARRRRR to take out all the enemies before they can do the same to you. The controls can be changed by going into the menu, clicking a control key icon, and then hitting the key on your keyboard you want to rebind that action to, though the default is [arrows] to move and jump, [C] to fire, and the down [arrow] to pick up anything. Coins from fallen foes can be spent between missions on upgrading everything from your special abilities and weapons to the strengths of your companions. Your teammates will move and attack on their own, and if they die, they're down for the count unless you've unlocked the limited revive ability. Healing items and any additional unlocked weapons will spawn periodically through openings in the floor, but your enemies can pick them up too! You can't replay missions, but you can earn more cash by playing "challenge mode" maps from the main menu. 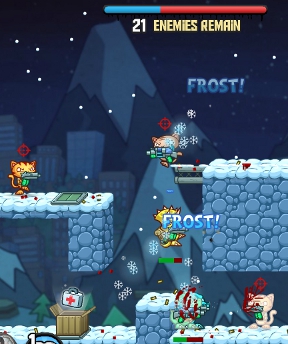 Despite its cute and cuddly design, The Last Dinosaurs is exceptionally bloody and violent, down to the slow-mo during the final kill of a stage's enemies that can send critter bodies ricocheting off the walls. Levels are fast and short, but it still would have been great to see a bit more variety in the environments themselves that actually impacted characters. Enemies may look different, but they don't really play differently, and the appealingly chaotic gameplay is crying out for something to shake it up a bit and keep you on your toes. Give the llamas a stunning spit, or allow the monkeys to leap and clamber on walls! As it stands, The Last Dinosaurs is still a rock solid little arena shooter with a cute story wrapped around it as you follow Russ and his buddies in their quest to rise up against the furious felines and their allies. As you unlock more weapons, levels get a lot more interesting with different types of ammunition and their effects in play, and once the enemies start appearing in greater numbers, it gets more exciting, especially when you gain allied forces from time to time. The Last Dinosaurs is bloody, brawl-y arena shooting simplified, and perfect for when you need a dose of hopping, blasting action to fill a coffee break.