In the Ukraine, nearly half the population endures domestic abuse at some time in their lives; it is the women and children who suffer from this physical and emotional tumult most often. Masha is one of those women and, tonight, she has finally hit her tipping point. After a violent fight with her husband, Masha's son has gone missing along with The Kite which he loves so much. 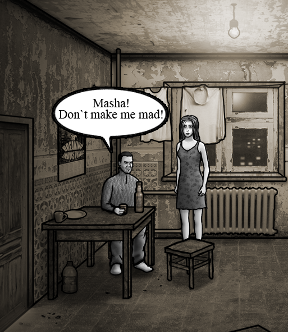 In this provocatively portrayed adventure game from Anate Studio, help Masha in her harrowing night by pointing and clicking through the somber environment to gather the tools and courage needed to reach her son. With the exception of [P] to pause and access the menu, all controls are confined to the mouse, with different functions for the right and left buttons, and a drop-down inventory keeps items handy. The changing cursor mechanism works well to indicate interactivity with people and objects or where a scene can be exited; explore each scene by moving your cursor over everything. Gameplay resembles an escape-the-room game: solve a few puzzles, determine how to get past obstacles, and just get out of there to find the missing boy.

The puzzles and situational riddles are truly enjoyable yet can be tinged with annoyance in a couple instances, a couple quirks in the interface or design accounting for part of the challenge. In one case, the click points for closing a drawer and for taking an object out of it are too close, which is misleading. Later on, the particular order of operations in another puzzle might leave you baffled. During dialogue, a clock with spinning hands marks your wait; this might pique your impatience yet it also sets the pace to one that matches Masha's persistent hardship. Topping off its affecting visuals, the game's soundtrack—all Beethoven—sets the tone and adds a poetic element to the overall mood of the experience. The Kite is short, about an hour for the average player, yet its impact is much longer lasting. 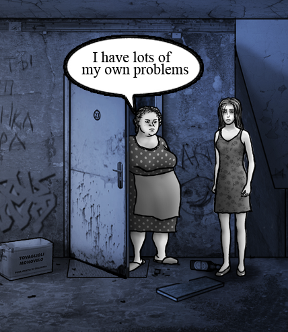 Analysis: Game designer Anatoliy Koval and artist Tanya Medvid effectively employ Naturalism in their art and story; this results in a quiet beauty that softens the edges of melodrama, keeping it from being an eye-rolling soap opera. Just as you're perhaps looking sideways at Masha, wondering how she can stand upright with such a weak spine, you're compelled to keep playing, to see more, to spectate, and to wish for a happy solution to the problem. Soon it becomes clear: people in abusive domestic situations are clouded by their circumstances and do not have the perspective of a better situated outsider who can come along and see so clearly what they ought to do. Lack of education, financial dependence, psychological exhaustion, knowing only this way of life, and an apathetic society trap them in a cycle of abuse. Masha doesn't comment on that, though. She knows one thing: find her son.

There is something about art that defies description, that makes it all come together and, simply, work. For The Kite, it is its heart. Nothing is crassly or gratuitously added merely to appease players; Koval and Medvid clearly love their game, value their work and care about its design. This investment in the game and empathy for their characters transmits to us, the players. It's not just about the message or the gameplay, the story or the art. While The Kite has a fair amount of shortcomings, its merits make it engaging and enjoyable, contrarily, considering the subject matter. The few flaws in the diamond don't stop it from being a gem even if they do distract from its luster.

Although it's very stark and sordid, The Kite succeeds in being also beautiful, headily atmospheric and moving. Stunning, even. If Thomas Hardy was around today as an Indie game designer, I don't doubt this is the kind of game he'd make. Whether Masha faces a better fate than Tess of the D'Urbervilles, I'll leave to your own discovery.

UPDATE: The latest build of The Kite, version 1.2e is now available on Desura (look under "releases" in the right hand column). Version 1.2e fixes a hotspot issue, described in the review, and has a much improved English translation.

Note: this walkthrough gives the most direct solution to the listed scenarios. It does not include extra steps for discovering "easter eggs" or dialogue encounters which you'll find by exploring on your own. Please use sparingly. ;-)

The Livingroom: Andrew is Hungry

The Fight and Escaping the Kitchen

UPDATE: If you're having trouble accessing the MATCHES in the kitchen drawer, consider updating to version 1.2e, available on Desura (see the note above this walkthrough section).

Now, Masha is locked in the kitchen...

The Game's On, Where's Our Child?

Finding a Cigarette, Getting a Camera

Camera Shy Guy and Getting on the Roof

On the Roof: TV Reception

Wow, the artwork on this looks amazing. I hope they will port to Mac soon.

My name's in a videogame! This is awesome :3 U all should be jelly :D

Note: this walkthrough gives the most direct solution to the listed scenarios. It does not include extra steps for discovering "easter eggs" or dialogue encounters which you'll find by exploring on your own. Please use sparingly. ;-)

The Livingroom: Andrew is Hungry

The Fight and Escaping the Kitchen

UPDATE: If you're having trouble accessing the MATCHES in the kitchen drawer, consider updating to version 1.2e, available on Desura (see the note above this walkthrough section).

Now, Masha is locked in the kitchen...

The Game's On, Where's Our Child?

Finding a Cigarette, Getting a Camera

Camera Shy Guy and Getting on the Roof

On the Roof: TV Reception

so... how do I open the inventory?

Hover your cursor at the top of the game screen and the inventory menu will drop down.

Is there a bug? I never find

a box outside the apartment, only the one upstairs and the one outside on the steps

Here are the box locations:

The thing that got me most was how Masha approached solving her problems. She seemed oddly willing to just jump through whatever hoops they gave her without arguing too much, or even speaking up and telling them that her child is in danger and she needed to help him. It makes me wonder, has living an abusive spouse taught her that any appeal to empathy is just useless, and the only way to reach people is to give them what they want?

Perhaps if she'd just been honest with them, she'd have been able to get things done quicker and get to her son in time. Maybe not, but it feels like a possibility that someone would have been moved enough to help her. I think the real tragedy of this is how she's been conditioned to think.

Apart from the dialogue, which could have used some editing, this was perfect. It wasn't a fun game, but it wasn't supposed to be.

Really did not enjoy this game. It seemed promising with its beautiful artwork. But the gameplay was unnecessarily obtuse with very little clues about why Masha is stuck at any particular point. This is essentially an escape-the-room game, and its unnecessary obtuseness was quite annoying. For example:

Having the cat knock down the camera. That was so far out. I would have thought that a normal person would be able to find a stick or a broom to knock that down.

This game had the potential to be great. So it was quite disappointing to see the gameplay issues.

This is a perfect example of how games can be important in making people understand and become motivated about issues, by forcing them into a position where they have to empathise with the lot of others. Understand by being there. And without needing to resort to easy tear jerkers. I can't wait to see what else these folks will do.

The atmosphere sucked me straight in, and I kept going even though theoretically the apathy of the protagonist should have made me care less. But I cared - while simultaneously somehow sharing her apathy. It's difficult to explain, but the game is very successful in achieving just the right tone, through (fantastic and fitting) graphics, through the music choices and most importantly: through gameplay. What could have counted as drawbacks (mindless back and forth trotting, sense of loss, lack of direction, minimal options, sometimes lack of obvious solutions) helped instead in showcasing the emotional state of the protagonist. I normally hate these things. I normally never finish a game like this without walkthroughs. But I was so wrapped up, I just kept mindlessly going on, just like her, on to the next task.

Really well done, really worth playing. Go in without expectations and allow the game to take you there.

That is a very nice review of the game, Lin. Thanks! I agree wholeheartedly.

I just did a let's play of this game on my YT channel, and honestly I'm very disappointed in it. The very serious and dark nature of this game is totally lost in the ridiculous puzzles and shoddy dialogue translation. I think people are reading far too much into this game's obvious flaws when they say they somehow "add" to the atmosphere of the game. A crumby game is a crumby game, regardless of the topics its story addresses.

Thank you for your feedback, aesagaming. Yet I very much disagree. You're free to form your opinions of the game's merits any way you wish, but watching a YouTube of it (which probably wasn't the updated version with an improved translation) impedes the impact of the playing experience to the same degree that watching a game of baseball is nothing like swinging the bat. The Kite does have its flaws, but it also has so many good qualities that I hope you'll give it another chance by personally playing the latest version.