The Journey Down: Chapter One (mobile)

The Journey Down: Chapter One is an adventure game from SkyGoblin that made the trip from desktop download to mobile app without a hitch. First released in 2010, the game has since been remastered with brand new visuals, voice acting, and lots of additional content. It looks fantastic and plays like an expertly-crafted adventure game of old, even with the fancy futuristic touch screen interface! 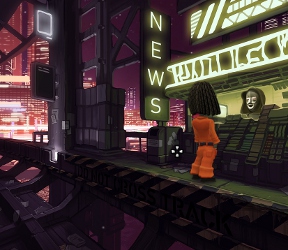 Bwana and Kito are having a bit of an issue. The big bad electric company wants money. Lots of money. And until they get it, the power stays off. It's tough to run Kaonandodo's Gas 'n Charter without electricity, so the duo comes up with a few "alternative" solutions. That's when the lovely Lina shows up asking about a strange book, kicking off a series of events that leads them deep into corporate corruption and more danger than you can shake a plate of oxtail and beans at.

The Journey Down: Chapter One is built like a tried and true adventure game from the ground up. Use the touch screen to tap on items of interest, carrying out conversations or examining items laying around. Tap, hold, then drag to reveal hotspots you can examine, a nice way to take a look around without actually tapping on things. Bring up the inventory by touching the box in the lower corner of the screen. Apart from that, you're on your own to solve puzzles and figure out what the heck is going on in this strange town!

The Journey Down looks fantastic in its updated form, and it was adapted to mobile devices so expertly it might as well have been native to the touch screen. It looks phenomenal, the puzzles are great, the voice acting is superb, the sense of humor is witty, and the soundtrack is catchy. Go on, this game won't play it self!

The Journey Down: Chapter One
(iPhone, iPad, iPod Touch)

The Journey Down: Chapter One (mobile) Walkthrough now available!

The Journey Down: Chapter 1 Walkthrough

Sometimes it isn't obvious how to get to certain parts of Kingsport Bay. Starting Outside the Charter, here is how to get to the various locations in the game world.

NB: Please see the Locations section of this walkthrough for how to get to various parts of Kingsport Bay. Locations are capitalized and in Italics.
Finding the Propeller

Getting on the Yacht

Enjoy the end of Chapter 1!

The Journey Down: Chapter 1 Walkthrough

Sometimes it isn't obvious how to get to certain parts of Kingsport Bay. Starting Outside the Charter, here is how to get to the various locations in the game world.

NB: Please see the Locations section of this walkthrough for how to get to various parts of Kingsport Bay. Locations are capitalized and in Italics.
Finding the Propeller

Getting on the Yacht

Enjoy the end of Chapter 1!

I'm getting strong Grim Fandango vibes just from watching the trailer. That is a very, very good thing. I'm pretty sure I'll be buying this one.

Now that I've had to go the Android route, I'm hoping to see some of these great iOS games there as well!

Good game! Any ideas how to make toast? Oh and by the way it does have the same charming humour of monkey island. So far a delight.

Here's a hint for you regarding the toast, nikikinz:

There's something somewhere that can be used as a toaster. It's in the same room that you get the bread.