The Jolly Gang's Spooky Adventure is a point-and-click adventure game that doesn't take place in a near-fantasy world, a scary haunted mansion, or a series of dream worlds connected by a magical portal. It also doesn't involve anyone's family member heading off to investigate a long-lost artifact. It does contain cheesy visuals and a bit of an adult sense of humor, making it one of the few casual games to target an older crowd. Think of it as a casual version of Ben There, Dan That! mixed with your favorite browser-based room escape game. 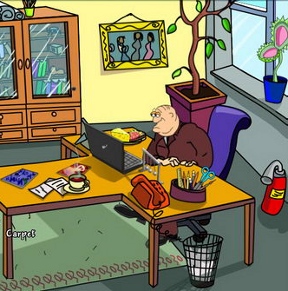 It all starts with a job. A job working for a tabloid, to be more precise, where you're sent on a quest to photograph a ghost haunting a psychic's house. A few locked boxes, a difficult secretary and a disgusting herbal potion later, you receive your first paycheck and head off to celebrate. The party has barely begun when you receive a call from your boss sending you out to investigate another spooky incident. But, hey, if one photo can fund a party, think what kind of a party several photos can throw!

Get your mouse hand ready, as it's all you'll need in this game. Each room is stocked with a number of items and puzzles that must be solved before you can move on. A handy "objectives" space on the menu tells you what needs to be done next, while an optional items list at the top of the screen helps you stock your inventory with the right things. Solving puzzles is a lot like a room escape game and involves unlocking cabinets, digging through trash cans, finding combinations to unlock a safe, and the occasional mini-game or two.

Analysis: When playing The Jolly Gang's Spooky Adventure, you can't help but think of Ben There, Dan That! and its sequel Time Gentlemen, Please!. The games share a similar flavoring of humor, a purposefully sloppy-looking cartoon-like visual style, and irreverent situations around every corner. Jolly Gang is very much a casual game, though, so expect a shorter experience with much easier puzzles to solve. It also doesn't push the humor button quite so far.

Games like The Jolly Gang's Spooky Adventure have a tendency to polarize gamers. In other words, you'll either run away screaming or absolutely love it. Some will enjoy the exaggerated visual style, odd sense of humor and simpler puzzles. Others won't see beyond five minutes into the demo. Here's a protip from your ole game-reviewing pal: turn the voice volume all the way down, otherwise you'll be "treated" to the constant babbling of what sounds like Gilbert Gottfried with a lungful of helium screaming from inside a tin can. The game plays so much better with quiet text reading in your head.

It's easier and shorter than most adventure games, but you'll enjoy every minute and hate when the game is over. Take a break from the usual casual adventure game and enjoy something very, very different.

Get Ready for Work

First Trip to the Office

At the Farm - Third Assignment

Thanks eileen for putting together such an awesome walkthrough :D

I really don't want to disencourage the developers or anyone from playing the game. But, as the reviewer said, people love it or hate it.. I guess I fit into the "run away screaming" category. I couldn't find a single thing to compliment.

The voice acting with the chipmunk distortion is absolutely horrible!
I understand the comparison between this and Ben there Dan That was graphics related, but still.. BtDt is for Lucas Arts adventure games as this one is for Barney's "Let's have fun with manners." Not even the sense humour was apreciable.

Get Ready for Work

First Trip to the Office

At the Farm - Third Assignment

Thanks eileen for putting together such an awesome walkthrough :D

I played this game twice and both times when I get to the part where I have to collect 25 coins for Granny, I can only find 24. The screenshot above does not work so I can't check to see where I missed one. Oh well. Anyone know?

[Edit: Thanks Paul, the links have been fixed in the walkthrough. -eileen]