Ah, amnesia. That mysterious, extremely rare condition in which you lose all memory of the past. Where would daytime television writers be without it? Even though amnesia is central to the new adventure/hidden object hybrid game The Fall Trilogy Chapter 1: Separation, it still manages to spin an intruiging setting and experience. Assuming you don't forget all about it after you finish playing. You know, 'cause amnesia and all... 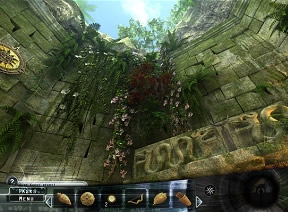 Designed by Kheops Studio, makers of Return to Mysterious Island 2: Mina's Fate, The Fall Trilogy begins with a promising storyline of mystery and adventure. Our unnamed protagonist wakes up in a mysterious temple who-knows-where with no recollection of who he is or how he got there. The only thing to do is to wander around this beautiful, decaying ruin and try to find your way out. Hopefully he hasn't forgotten how to walk around, pick stuff up, and solve puzzles. As you make your way along you begin to get brief flashes of your past, of a wife and son waiting for you somewhere, and other bits of memory that seem as distant as they are true.

You can navigate through this spectacular space with the mouse by clicking the arrows or on a distant point where the cursor changes to footprints. You can even switch the controls to a free-looking navigation style that lets you check things out in a 360 degree panorama. Just use the [arrow] keys or click and drag with the mouse to look around. It might be a little dizzying at first, but the added freedom adds volumes to the game experience.

As you wander around, you'll encounter some wicked hidden object goodness, as you find yourself suddenly needing to uncover a lot of gears, paint supplies, or other things that will aid you on your quest. Unlike most hidden object games, though, everything you pick up is necessary to finding your way out, a nice touch on the developers' part. And there's a handy refilling hint system to help you along, if needed. 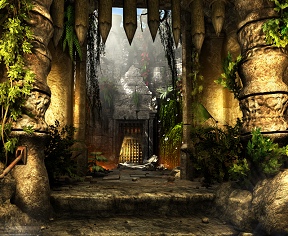 Then there are the mini-games, seen when the cursor changes to gears when passed over an area. The mini-games are mostly iterations of standard games all requiring logic to solve. They can be skipped, or you cany change the challenge level by resetting the game and choosing the difficulty level, easy, normal, or hard. Solving the mini-games opens new areas to explore, and new riddles to be solved. As you play, your character will narrate what is going on, giving his best guess as to what needs to be done next. All you need to do is make your way out of this multi-chambered temple so your character can go home. Easy, right?

Analysis: It's interesting to see this hybrid of an adventure/HOG overlaid with the aesthetic of a large file 3D game. Almost like playing large file light. A nice way for newbies to the genre to get their feet wet, while still posing a challenge to more experienced players. The ability to switch between navigation modes especially makes the game accessible to amateur and experienced gamers alike.

The backgrounds are flat-out stunning. Detailed, intricate, and gorgeous. Take your time to wander through this beautifully rendered 3D world, look up, down, and all around. Marvel at the detailed textures and colors, be amazed at the upper views showing sunlight streaming through the open roof areas, delight at plants and waterfalls streaming down from above, have fun exploring the space. Eerie yet appropriate music and sound effects enhance the immersive experience, making The Fall Trilogy Chapter 1: Separation play almost like a much larger platform game. 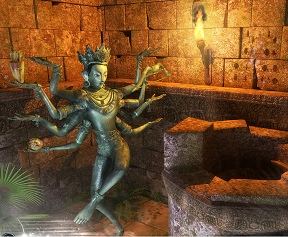 The gameplay is a mixed bag of easy and difficult. The hidden objects are often very well hidden, lurking behind plants or other objects, making the HOG scenes tough for those whose eyesight isn't what it used to be. The mini-games are nothing terribly original, but the ability to ramp up or ramp down the challenge of each one is a nice touch, making this a game that anyone can play.

The voice acting, while competent, can get a bit... well, tedious at times, especially when it telegraphs things that some gamers would rather figure out for themselves. This can make the game a little too easy for the experienced. Fortunately, dialogue can be skipped with a quick tap of the space bar, leaving you to the soothing music and magical sound effects in peace. The mini-games can be as easy or as hard as the player would like to make them, but it would still be nice to see something a little more original. And the slow refilling hint timer can be very annoying when dealing with one of the hidden object scenes, as the objects can be a little too well hidden, making them almost invisible to the naked eye. It also would have been nicer if the game were a little longer, or at least if we learned a little more about the story-line before the "to be continued" hits.

The Fall Trilogy Chapter 1: Separation is still a fun ride. Kheops has taken the look and feel of a large platform-style game and condensed it down into easier casual gameplay. A nice intro for those new to the genre, while being challenging enough for those who love the larger, more immersive experience of epic games. Beautiful, alluring, and fun to play, The Fall Trilogy Chapter 1: Separation is a promising start to a new series. Here's hoping the trend continues!

The ending is quite good

you will walk across the gap,
suddenly fall and open the eye just like the intro
(you would think that it is like a loop)
but you will wake in a room instead!

I've been driven to insanity.....hey insanity give me a clue ....where can I find a bucket for me sand?

Using the hat to pick up the sand?

if you are looking for sand for the balence

if you are looking for sand for the ending

go back to the balence room, and pick up your hat

the color map puzzle and the hexagon domino are the most frustrating,
they both used me about half an hour, sigh....

Made it through to the final sand container puzzle. Having a problem working out

how to carry sand to the exit of light while keeping the triple gate open. Got the hat and the bowl with the hole...

Any clues would be greatly appreciated, considering I've exhausted the in-game clues...

I think I need more tea...talk about missing the obvious!

Hmmm... there are some interesting ideas in this one but it could've been executed better. The hidden object scenes are just awful. "hey, lets find 20 things that all look the same". Thats just plain boring. Also I don't like games that basically just tell me exactly what I have to do next which often happened in this one. Also I guess most people have seen The Last Crusade so there really is no need to explain that you blatantly stole from that movie by having the character say something like "i saw this in a movie"...

Apart from that, nice work. Just try to treat the players more like intelligent beings in part 2.

charlatan: As for finding objects that all look the same, I guess it's a matter of personal preference.

That was something I really enjoyed about Mystery Case Files: Madame Fate (one of the very best hidden object games): the scenes where you had to find 20 spades or hearts, etc. Once you have your eye trained for a certain object, it is a lot of fun to just click through them all in rapid succession as fast as you can. :)

In Madame Fate these were not all identical looking. They were quite different and imbedded into the scenes nicely. And you COULD actually click rapidly which isnt possible here either because there is a pause after each object you find...

There were some things I rather liked in this one -- the free-look 3D rendered locations in particular -- but overall I was a bit disappointed in it. For one thing, it's short. It only took me an hour or so to play. That makes it a lot shorter than other games that Big Fish charges the same price for (e.g. Hidden Expedition: Amazon, or especially the recent headline game Dire Grove). Not only is it short, it's of course set up as just the first of three installments, to the point of ending on a cliffhanger. Quite unsatisfying. [And on a production note, it was quite jarring to hear the voiceover say "lever" when the subtitles more accurately said "marble" -- twice!]

A couple of the puzzles encountered during play also disappoint by being simple recaps of earlier puzzles, but with added difficulty.

I should be clear that I enjoyed this reasonably well; I rated it three stars/mushrooms above. That said, I don't think it's a particularly good buy for the money.

I tried playing this game twice...both times it froze my computer or my cursor.
Had to reset my wireless mouse...no, it wasn't the batteries.
I play a ton of games & this is the first one causing me any trouble.
Removed for good...too bad!
Ugh!