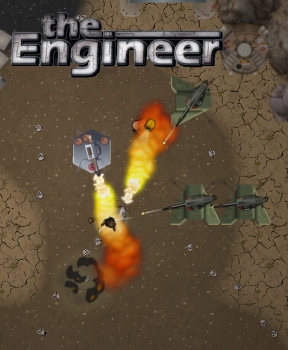 Heavy weapons training must be part of the degree program at MIT. That's really the only way we can explain the plethora of hardcore butt-kicking engineers in video games. Gordon Freeman started this noble tradition in Half-Life, Team Fortress 2's Engineer continued to practice practical science in the name of bloodshed and now we've got Zach Scrap, protagonist of a new top-down shooter by Jazza Studios appropriately titled The Engineer.

In classic top-down shooter style you move with [WASD] and shoot with the mouse. As an engineer, our hero can also construct turrets, structures and bombs using scrap from defeated enemies and scrap piles found throughout each level. Your goal in the main story mode is typically to hack several consoles in each level, a task complicated by the armies of angry robots out for blood. Your best option is often to set up a nest of turrets while you work on your current hack; fortunately a lot of your options are high-powered robot-vaporizing fare like lasers and rockets so you won't have to miss out on any carnage.

While top-down shooters like this are pretty common, there's a lot to be said for the amount of destruction and strategy introduced by The Engineer's turrets and weapon upgrades. Different types of turrets are better in different situations and you'll need to balance hacking with fighting and grabbing scrap. In the end you're going to have to use the brain that got you through grad school; your Ph.D. came with a license to kill and it's time to put them both to work.

[It is noted by the rating in the game review header. Click on the orange rating icon to see an explanation of what our ratings mean. -Jay]

I can't play this game because of the SEVERE lag... too bad, it looked interesting. =/

Wow... the lag on this is severe. With no option to adjust the quality, this renders it almost unplayable. Perhaps it's my machine, though I doubt it. Anyone else suffering?

Is it just me or does the lag render this unplayable?

Having played 4 levels, I can state it's quite good (3,5/5). The game is nicely made and the difficulty is engaging.

Few disadvantages:
- may be somewhat monotonous after a while
- bug 1: when you press space (and keep it pressed to build) the mouse is stuck (at least on my laptop) and you first have to push the arrow keys a few times before you can use the mouse again
- bug 2: sometimes, when you want to start a level, the screen stays black and you have to reload the game

Is it bad that on seeing the title my first thought was
"...is SPY!" xD

Mmmm, level 5 is too difficult for me and I don't like the game that much to keep trying..

The last 2 levels had me do a lot of mazing and waiting to get a ton of cash.

too laggy for me to play.

SEVERE lag. I have a top notch system so it isn't a local hardware issue. By the second level it became unplayable. Too bad because I think the game has promise.

This particular game uses the new "wmode=direct" Flash Player parameter, which allows the game to draw directly to the screen rather than allowing your browser to do it.

If the game lags on your computer it's most likely because you don't have hardware capable of supporting this mode, and thus Flash will use standard software rendering instead (which is much slower).