Upon awakening in a run-down motel room, you hear a beeping sound. It seems to be coming from a tablet on the table across the room. A creepy message tells you the police are after you, to wash your face and get out. How did you get to the back end of nowhere, and what did you do to set the police on your trail? That's the set-up for a great new point-and-click adventure title, The Cross Formula from KatGames, developers of the popular Dream Chronicles series. 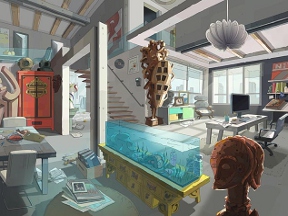 As you retrace your steps from the week before, you begin to get clues as to who you might be and why you are on the run. Some unknown Big Brother controls the tablet that guides you, providing you with information — and warnings — along the way. Certain sights and sounds will trigger blackouts as you travel, and suddenly you are trying to figure out a piece of the formula you're searching for. What the formula might be, and what it has to do with you, are slowly revealed throughout the game.

Everything plays out in a very adventure-oriented kind of way. Items can be examined, taken, or otherwise interacted with by a simple click of the mouse. You can move to new areas by clicking certain parts of the screen, and a hint button at the bottom of the screen nudges you in the right direction if you're stuck. Your inventory also plays an important part in the game, both in terms of the story and with various puzzles you'll encounter as you progress. 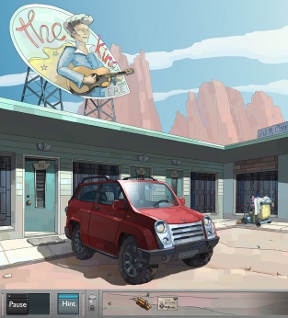 Analysis: Adventure games are just about the keenest thing ever, but sometimes the puzzles are too obtuse for a casual player to solve without consulting a walkthrough. Difficult riddles are one thing, but spending your time trying to figure out what the puzzle designer was thinking so you can follow that twisted line of thought is another thing entirely. The Cross Formula elegantly sidesteps that problem with sensible item usages and story outcomes that never leave you in the dark.

The beautiful pastel hand-drawn art is rich in detail, from the torn wallpaper in the motel room to stains on the ceiling tiles in the lobby. Set in the deserts of New Mexico and Arizona, the artwork draws on the color palette of the region, washing everything in bright white sunlight. Little touches add especial beauty to each scene, like the wind blowing outside the window of the motel lobby, or the sunshine streaming through rooftop windows in an underground bunker.

Sometimes, the map jumps you'll make are a bit disorienting, especially if you're familiar with the part of the world the game takes place in. One moment you're near Albuquerque, New Mexico, then you're in Arizona before suddenly hopping back to a mountainous region in southern NM. Fortunately, very little else pulls you out of the game's world, as even the mini-games fit the storyline. The high number of clickable objects is also a plus, even if it just provides you with a little information and isn't directly related to the tasks at hand.

In the end, no matter how gorgeous a game is or how good the gameplay, if it's over too soon, it's easy to feel cheated. The Cross Formula is a lengthy adventure, requiring two, three, or even four sittings to complete, even for the pickiest and most experienced of adventure nuts! It's a refreshing change of pace from the glut of hidden object adventure games that are flooding the market, from the artwork to the sound design and smartly-built puzzles. A great, unassuming game that will take you by surprise!

I gotta say, the art really stands out in this. I'm starting to warm up to the static First Person Adventure game subgenre, so I might have to try this out

Interesting game but I disagree with the reviewer about length - the game took me 1.5 hrs in one go without the use of any hints. The puzzles were generally very easy and didn't require much thought to beat. If the story was a bit more involving I'd be more forgiving but there was nothing new here and the ending seemed sudden and left things unresolved. Neat but not worth the $$ imo.

I don't know if this is an issue with the game or the Big Fish Game Manager, but I just bought the full version after playing the 1-hour trial (taking advantage of the Memorial Day sale :)), and while the game remembered my last location, it lost everything I'd done up to that point.

I learned this because I'm now at the final scene where you need all the flashback puzzles to be solved, and my first three are missing. And I don't mean incomplete, the icons are not there to begin with. The locations those puzzles came from are also not saved in the tablet. So now I have to restart the game because I can't get out of this screen without having everything complete

Just wanted to give a warning in case this happens to someone else.