I'm fairly certain that one day archaeologists will uncover primitive point-and-click adventures made by the Egyptians out of brass, papyrus, and scarabs. (Everything is better with scarabs.) It's an old genre, and you either love it or you hate it. It's probably one of the easiest games to make, but it's also one of the hardest to make well, so it's understandable that it's gotten a bit of a bad rep. But every once in a while a series comes along that shows the others how it's done and rewards your loyalty with something special. In this case, it's mysticism, mystery, and mediums in The Blackwell Convergence from Wadjet Eye Games. 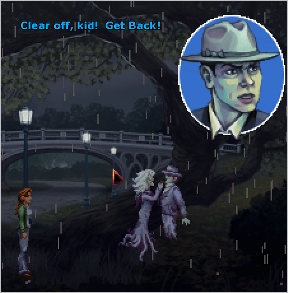 Rosangela Blackwell is a writer. Or, at least, she would be if publishers would stop rejecting her work. And the ghosts of New York would leave her alone. Because Rosa, as it turns out, is a much better medium than a writer, and together with her begrudgingly helpful spirit guide, Joey Mallone, she's started to investigate bigger and bigger cases. Fortunately for her career, New York has no shortage of drama, and it isn't long before Rosa senses a connection in a string of seemingly unrelated murders. Unfortunately for her, she might not be ready to find out what that connection is.

Although technically the third in a series of games centered around the Blackwell family, The Blackwell Convergence does a decent job of providing you with enough background information on the two main characters that you can play it without having played the others. Rosa, as mentioned, is a medium, and can see and speak with ghosts. Joey is Rosa's spirit guide, and can do most of the standard ghostly things you would expect, including passing through doors. You can swap between them at any time by clicking on the initials that appear at the top of the screen when you move your cursor close to it.

The game plays like any point-and-click adventure. If an object can be interacted with, the name of it will appear when you move the cursor over it. Left-clicking on an item, person, or place will cause your character to move to it and interact, if possible. Right-clicking examines an object or person and tells you more about it. Throughout the game Rosa will discover various clues she'll jot down in her notebook. You can refer to this in conversation to find out more information on a specific topic, which in turn helps open up new locations and scenarios.

There's actually not a tremendous amount of puzzle solving to be had, and most of them boil down to going to the right places and talking to the right people, aside from a few easy item puzzles. The emphasis here is on story, which The Blackwell Convergence carries off with aplomb. Once you've explored an area as Rosa, investigate as Joey, who has a drastically different opinion on nearly everything. The dialogue is snappy, the characters interesting, and the atmosphere top notch.

Let's get one thing straight. This game is so pretty I want to stand under its balcony in the rain, holding John Cusak's stereo over my head blaring '80's rock ballads until it agrees to go to the school dance with me. I've always been a fan of pixel art, and Blackwell Convergence swings for the fences with it here. The attention to detail and depth of colour in not only the characters themselves but every scene is absolutely amazing. It's also pretty easy on the ears too, with a wonderful soundtrack and voice acting. (And if you don't think the voice acting is wonderful, or just prefer your adventures silent, you can turn it off in the options.) 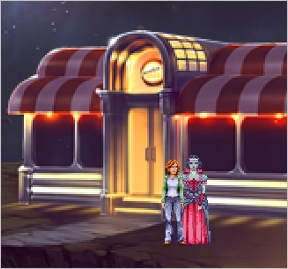 Analysis: Admit it. You heard "point-and-click" and that vein in your forehead ticked a little. The Blackwell Convergence does fairly well on the items front by keeping your inventory uncluttered until you actually need the item you pick up. Where it does falter, however, is Rosa's notebook. Early on she expresses concern over its safety. Halfway through the game I wanted to set it on fire. A big chunk of advancing the plot is achieved through discussing the contents of Rosa's notebook with people, which can be frustrating when that ultimately boils down to choosing the same dialogue option over and over in conversation until it seems to have exhausted itself, and then repeating it again with someone else.

What's clever are the various mechanics inside the game that inject a little variety into the genre. Rosa's computer will become very important to you as you use it to check e-mail, search for addresses, and "Oogle" for information. Joey can be used to eavesdrop on people or to disrupt certain bits of technology. Or keep vicious animals occupied with his tie. While you're still ultimately doing a lot of walking back and forth, the game is adept and injecting enough new concepts into the old point-and-click formula that it doesn't feel stale.

Part of what makes Blackwell Convergence such a pleasure to play is its stellar cast. All of them are interesting and distinct, but for me, at least, it's Rosa herself who really stands out. Game heroines are a tricky bunch, and are frequently either portrayed as insufferably perfect hard-cases, or fragile, "adorably" shy and pure do-gooders. Rosa, by contrast, is refreshingly... well, normal. She's a little bit awkward, doesn't have a comeback for every situation, tells a few corny jokes, but is gutsy and dependable when she needs to be. She's just a regular chick who happens to hang out with condescending dead guys, and by keeping her qualities mortal like the rest of us, Wadjet Eye has given us a heroine we can relate to.

So what's the downside to all this shining praise? Well, the game is short. Like, "Where the heck did my afternoon go?" short. Time really does fly when you're having fun, and I emerged from The Blackwell Convergence a little bewildered to discover I should have started supper several hours ago. I wanted more, not because I felt the story was lacking, but because it had done so well. It has a story to tell, and does so. There was a nearly two year delay between the last game in the series and this newest, and had the game been any longer, I suspect we'd still be waiting on it.

Is it fun? Oh yes. Do I recommend it? Absolutely. With a strong story and some of the highest standards I've seen in a point-and-click adventure, the Blackwell Convergence is a rare treat. It may be short, but Wadjet Eye Games doesn't scrimp when it comes to quality, and will leave you eagerly awaiting the next story in the series. Give the demo a try and decide for yourself. Any game where the creators thank coffee in the end credits is a game I hold dear to my heart. It's nice to have developers who understand you.

Can't play on Mac with Crossover. Can't right click to "look" at items.

Try plugging in a mouse - will probably let you right click.

Unfortunately, I don't have enough space on my computer to download this game at the moment. But I would like to say that these graphics look like they are right up my alley!!!
Beautiful.

Can you make a printable version of the walkthrough?

I really love the game, but I'm stuck in the gallery. Claude won't talk to me

I broke the paperclip on Frank's apt door and now can't finish the game without starting over :(

The paperclip always breaks off in Frank's door. Rosa can't search the apartment. Only Joey can.

The only thing of importance in the apartment is the script page. Joey memorizes it and tells Rosa. She then acts out the scene with Frank.