In Technocrat Games new retro point-and-click adventure Technobabylon, you are thrust into a cyberpunk city of the future, where an AI called Central runs the city of Newton, genetic engineering is the norm, and you can link to the net with your mind. Regis and Lao are partners on the case of a serial killer, a so called mindjacker who hacks into people's brains, steals their knowledge, and leaves only a body behind. Throw blackmail, synthetic humans, and a young girl named Latha who'd rather spend her days connected to the virtual world and who seems to be the mindjacker's next target into the mix, and you've got one interesting web of a story to navigate. 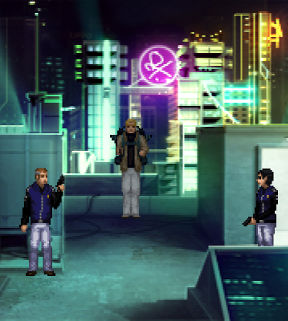 You switch between controlling the three main characters throughout the story, and each has their own strength or weakness. Regis, for example, while an accomplished genetic engineer, is a bit old fashioned when it comes to technology. Left click to try to use an item or object in the room, or right click for a description of it. Your inventory is opened by moving the mouse to the panel on the bottom right of the screen. Right click to examine objects you have, and left click to pick it up to use it in your environment. There are sometimes different ways to accomplish your objectives depending on the dialog choices you make. While this does make you feel the characters are yours, and various scenes can play out in different ways, it doesn't have much effect on the final outcome of the game.

The game is heavily story driven, so sometimes you'll sit back and have long conversations with the other characters. The dialog is well written, and the voice acting is very well done, which make the characters really come alive. Plus it's an important way for the player to learn more about this futuristic city and the forces that drive it. You are running an investigation, after all, so the more information you have, the more sense everything starts to make. The story is complicated, which is both a plus and a minus. It definitely keeps things interesting, but in a few places can be confusing or unclear. That's not to say the gameplay is all sit back and watch. There's plenty of hacking and using your items to get yourself out of difficult situations to worry about. One aspect that comes up several times in the game that I enjoyed was needing to switch around the personalities of various low level AI's or androids in order to get the information you need from them. The graphics and gameplay are spot on for a retro adventure game feel, and the various back drops you adventure in (not to mention its AI personality) make the city a character of its own. Central is watching your every move, and would very much appreciate it if you gave the game a try.

WOW. Tight on so many levels. Sound, Music, Attitude, color choices voice acting. I know there may be others that will pick it apart, that's inevitable, but this is great. By the way, I made this assessment after16 seconds of game-play. I have only done that with Monkey Island 3 previously. This will be worth every penny.

I adore Wadjet Eye's games, both in-house and published, and after the slight miss that was A Golden Wake I'm really excited for this one. I've picked it up and I can't wait to try it.

Great game, as good as Blackwell: Epiphany. One of the main reasons I play adventure games is for the story - And Technobabylon certainly doesn't disappoint in that area.

stuck with part9,how to change the Crate is not organic