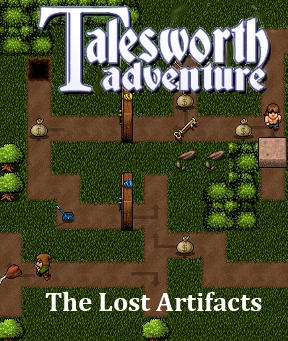 Risking your life is serious business, you guys, especially when we're talking about going up against an evil wizard called "Boneyard". Just stop and think about how one would get a name like that. Probably not by being a domino champion. But if the reward is right, even the laziest of men can be spurred to action, and with his own coffers empty after years of hard partying and no work, Questy reluctantly sets out to save us all once again with the promise of some sweet, sweet treasure to keep him in the lifestyle he's been accustomed to. If only he wasn't dumber than a sack of hammers. Sean Gailey takes us on another puzzle adventure in Talesworth Adventure: The Lost Artifacts, starring Questy once more. Also available in zesty iPad flavour!

The goal is simple; see Questy safely through each level by helping him gather keys and treasures while avoiding hazards and enemies. The catch? Questy moves along a path blindly, only changing course when he hits a wall, and he'll run right into monsters and pits, or even just around in circles. Fortunately, you can direct him by placing obstacles or incentives like gold down on the path to point him where he needs to go. Just click on an icon on the left side of the screen, and then click anywhere on the path to place it, and hit "Go" to watch Questy trundle onwards. Since Questy is a fine red-blooded barbarian fellow, he'll always turn towards any gold he sees, which can help keep him out of trouble or herd him in the proper direction. Handy, since traps, monsters you'll need the correct weapon to defeat, and other perils (that's right, PERILS) are standing in Questy's way of collecting the three artifacts he needs to defeat Boneyard. If you need to make adjustments, just hit "Stop" and you can move any placeable around.

The Lost Artifacts is, in concept, essentially the same game as its predecessor Talesworth Adventure Episode One, though with a big visual upgrade and a few new elements for your puzzle pleasure. The path plotting puzzling (c-c-combo!) remains as satisfying as ever, allowing for the sort of thoughtful gameplay you can pick up and spend a few turns with whenever you have time. Or whenever you want to make time for it, since the iPad version can go wherever you do, and the fantastic colourful SNES-ish graphics look great on its display. (Although for my money, I do miss the adorably blocky style of the original game. Atari-lookin' trolls for eva.) If you enjoyed the first installment, you'll definitely like this one, and while it might feel a bit like "more of the same", I'd call it more of a well-deserved upgrade. The story is a nice addition, as are the different locales, and the game overall feels a lot more ambitious while still keeping that same deceptive accessibility that makes it easy to pick up. Simple in concept and challenging in execution, Talesworth Adventure: The Lost Artifacts is a beautifully designed and addictive puzzle game that packs on the charm and character for one heroic experience. (Pec Oil not included.)

These setups will get all gold & all achievements.
Forest

Up the Mountain We Go
Pack Your Backtrack
Whelps Have Wings
Close Loot is Easy Loot
Yield to the Shield
Where do the Shields go?
Bonus Room - Veiled Retreat
The Mountain Horror

A Cave with some Chaos
Fear of A Grue
The Sweet Lure of Meat
The Mad Dash
Uh Oh, No Loot Bags...
Bonus Room - Forgotten Chamber
A Little Help From my Friends
Her Royal Highness, Kro'La

I forgot all about this,so now a sequel!!!!
I do love me some puzzles

I'm stuck in the third room of the third area. If I wasn't, then I'd try making a walkthrough

Third area? Please explain, there is a fork in the path? If it is the cave then i'm stuck too,
but if it is the mountain, tell me how to get a photo up. I also want to make a walkthrough.

Oh man, this game is tough. I can't get past even the first stage of the catacombs, "We're missing a cleric". Great to see a sequal to such a great game though!

its not a completed walkthrough.it misses a stage called "the alchemy lab" because i cant get the gold star. and the walkthrough order is not the same as you play the game. so maybe it helps if you stuck in some stage.

no images? i wish i can write a walkthrough with pics but it seems impossible now.

[Post links to images and we will upload them and host them here on the JIG server. I tried to upload the image in your previous comment, but it had already been removed, so I removed the link to it. -Mod.]

@Michael First area of the catacombs?I'm stuck at the last area of the mountain.
@mgbt1211 If you are reading my post, I meant I don't how to put up an image, and would like to know how.

These setups will get all gold & all achievements.
Forest

Up the Mountain We Go
Pack Your Backtrack
Whelps Have Wings
Close Loot is Easy Loot
Yield to the Shield
Where do the Shields go?
Bonus Room - Veiled Retreat
The Mountain Horror

A Cave with some Chaos
Fear of A Grue
The Sweet Lure of Meat
The Mad Dash
Uh Oh, No Loot Bags...
Bonus Room - Forgotten Chamber
A Little Help From my Friends
Her Royal Highness, Kro'La

After it having been some time, i'm now stuck at the bonus room in the cave, as am I also stuck at the mountain boss, so any hints.

This is the gold star for the bonus cave room...

6 of the wooden squares have to go down.

The next 4 square placements are if you were starting from the stone block by the entrance.

And then you have your gold star.

one for the Mountain Bonus Room

and one for "Someone must be trap happy"

Thanks but I got it shortly after I posted, now I would like to know how to get the baddie into the darkness on the chamber of souls.
P.S. Gabe did you understand my explaining,would like a response.

a little help from my friends

Thanks everyone for this game which I just beat. It's name: Talesworth: The Lost artifacts. I've gotten gold on every level.(Yes even that one.) Now should I play Minecraft, (The best game ever.) or should beat my Rubik's Cube record of 1:08:89 (That's a minute.)

Here's how you really get a gold rating on Mountain Horror:

Got a platinum on "A cave with some chaos."

[Thanks, Michael! We've added it to the walkthrough. -Mod.]

[Thanks, Bill! We've added it to the walkthrough. -Mod.]

Here's a platinum solution to "up the mountain we go":

[Thanks, bluemoose19! We've added it to the walkthrough. -Mod.]

The image for the Platinum Solution to the level "A Cave With Some Chaos" does not seem to exist anymore, it must have been eaten.

[The walkthrough has been updated. Thanks for pointing it out. -Mod.]

"The last line of defence" only has 6 loot bags and not 7 in kongregate, so following the one posted won't get a gold star.

Maybe the game has been updated? We'll look into it and update the walkthrough once we get a working solution.

The Sweet Lure of Meat platinium

An update for Gold on The Last Line of Defense

[Thanks for this! I've added it to the walkthrough. -Mod.]

Not sure how to post images, but you can get platinum on Simple Green by...

removing the second from right loot bag in your picture

Solved a platinum on "Her Royal Highness, Kro'la"

[Thanks! I've added it to the walkthrough. -Mod.]

Please note that the game was recently updated, and because of this, some of the walkthrough pictures may need to be updated.

"Update 1.1.2 � Removed a loot bag from both Deadly Loot and Last Line of Defense. This probably disrupts some Platinum solutions."

[Thank you! We've added it to the walkthrough. -Mod.]

[Thanks! We've added it to the walkthrough. -Mod.]

The image for The Mountain Horror doesn't give gold, as requirement is 2/2/2 (the image from walkthrough shows 1/2/2 solution).
It can easilly be fixed though, by removing the lower right treasure.

Does anyone know if ALL levels have the possibility to get platinum? Or is it just a few?

this site has the best walkthroughs, hands down

The loot bag to the left of the blue door (bottom) needs to be removed to leave 2 loot bags, 2 one-pass gates and 2 chunks of beat...

Also, the Solution 1 for The Last Line of Defense copied exactly gives a Silver Star, not gold

The Platinum walkthrough for A Cave With Some Chaos is incorrect. If you use it you die.

Fantastic game. Finished with 6 platinums; still a couple of bronzes and silvers to tidy up. Great twist on programming games, or ice slidy games, or that kind of thing.

I've got a better solution for the "Veiled Retreat" Platinum. It uses 1 less loot bag.