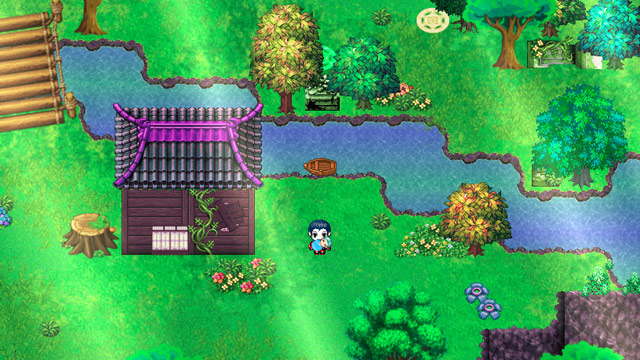 In the strange world of the northern lowlands, governed by the Order, lies a thriving society built on community. Taken to the extreme, they even believe that all children belong to all of society communally. To this end, you follow the journey of a lumberjack alongside his trusty son, who he must deposit in the care of the Children's Home to be raised by mentors. Unfortunately, along the way, he encounters some nature-dwelling gnomes that have their own ideas for the human child. Gnomes may be generally harmless, but this isn't stopping our tree-felling friend from taking matters into his own hands and getting his son back!

It was almost an uneventful handover of the small child to the mentors, if not for a strange twist of fate. After handing them over, the father realizes that he has forgotten to give them the bottle of milk for the baby, and hurriedly rushes back to do so to prevent the child from getting too hungry. But he's in for a huge surprise when he comes back and sees they have suddenly transformed into gnomes! Or rather, it seems they were never mentors at all - they were exerting a huge amount of energy to maintain an illusion - not just of the mentors but of their entire surroundings to induce the air of familiarity to the whole vision.

Of course, like any parent, the father is hopping mad that his precious child has disappeared, and runs along to try and find him. At first, there is no sight of the baby, leaving precious little in hints to the child's whereabouts other than a vague sense of which direction to head in. Suspiciously, obstacles begin to fall into place, blocking the father's path. The father, who does seem just a tad absent-minded, notices these things but is still not aware of just the magnitude of what is happening until he catches up with the gnomes. But if you thought the story ends there, it's actually just beginning. 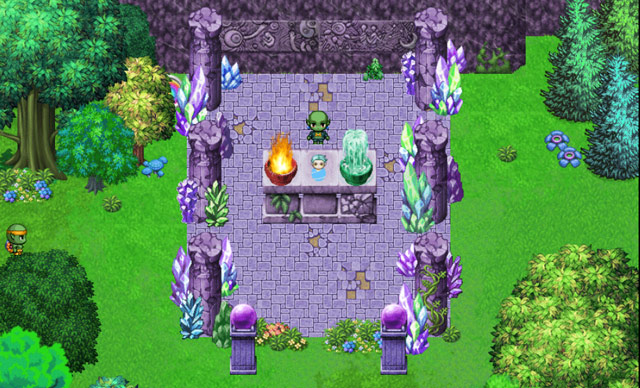 After a short confrontation, they use their magic to summon a large crop of small trees and shrubbery that will keep the father busy for a while. At this point, player control switches to control of the gnomes. Your mission becomes to bless the child in some weird gnomic ritual. To do this, you will need a huge diamond. Of course, a huge diamond would never survive sitting unguarded in the open, and is guarded by a gate that can only be incinerated by the intense heat
generated by burning a very rare tree. But getting the seed of this tree, along with growing it (only so you can burn it to the ground for your own devious ends) is not going to be a pushover of a task either.

Tales of Nebezem: Gnomish Plot is based off RPGMaker and thus has fairly standard controls. Use either the mouse, [WASD], or arrow keys to navigate through the different areas and scenes. To talk/interact with objects and other people in the game, use [Space], [Enter], [Z], or left-click. In the latter half of the game, when lead a party of multiple characters (the different gnomes), you can use keys 1-3 to swap between them, which will be needed to make use of their distinct magical abilities. Finally, use [X], [Esc], or right-click the mouse to access the menu if you need to customize settings or manage save slots so you can continue your playthrough later on.

I really enjoy Tales of Nebezem: Gnomish Plot particularly for its puzzles. Some of them are easier than others, and a few make you think outside of the box to get through. If the thought of difficult puzzles makes you a bit nervous, never fear - a hint system in-game is near! Throughout the game, you will collect special "Frabjous tokens" - some more well-hidden than others - which can be spent one apiece for a decently revealing hint about the current puzzle. Generally, these will be enough to guide you through any difficulty you may be facing. If you still need more help, Beranek has put up a walkthrough linked in the description of the game that you can see for future reference. So check out the quirky world, and help ensure that the child will get the upbringing it deserves!