Family. Can't live with 'em, can't enjoy a quiet night at home mangling your fledgling novel without one of them getting abducted into a movie by the man she thought was dead. In Elephant Games' hidden-object adventure game Surface: Reel Life, you receive a frantic phone call from your sister, Mary, who just saw her daughter Jane get abducted by Andrew... Jane's former lover and a beloved actor who was shot dead years ago. Arriving at the theater, you discover the developers have been re-watching Jumanji, and the film everyone was watching (a classic by a suspiciously talented director) has come to life, with poison spitting plants, monkeys, and tigers generally wreaking havoc. If you're thinking this is a job for the police or maybe animal control or generally just anyone who doesn't narrate her actions in the most groan-worthy fashion, well, you're not thinking like a hidden-object game heroine, darn it. Set off on an adventure beyond the screen to rescue Jane and discover the truth! 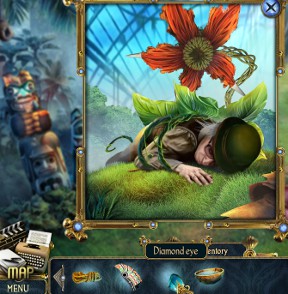 Surface: Reel Life is basically your typical find-y, search-y, puzzle-y, hidden-object-rummage-y game, with the story revealed in cutscenes and flashbacks as you go along. The concept is actually a fairly intriguing one... a famous director whose incredibly popular films developed a cult following, and you begin to discover there was some very literal movie magic happening when you explore the world behind the scenes in one of his most famous movies in your quest to save Jane. It's the sort of thing that could allow for some exceptionally gorgeous and imaginative scenes, and for the most part, it does... though very slowly. Reel Life takes a long time to get going, dragging you through a lot of repetitive backtracking through its environments. I'd call it padding the length, but honestly Reel Life feels like a very entry level casual game as far as challenge is concerned, making it the sort of thing you'll finish in a few hours. It's packed with a myriad of different puzzles to solve and items to find, but veteran hidden-object adventurers will probably find the bar set a bit too low on their abilities.

Surface: Reel Life is still a solid little title, it just feels like it could have done substantially more with its concept. It lacks (ironically) the big picture and drama that made the previous title in the series, The Noise She Couldn't Make, such a captivating spectacle, and doesn't really experiment with the concept of leaping into movies in the way that it could by sending you through more genres and scenes. Though a more straightforward game, however, Reel Life is a good choice if you're looking for the sort of game that'll just let you unwind without keeping the tone dark, and its plot, once it picks up, is actually pretty interesting. It ain't Jumanji, or even Pleasantville, but Surface: Reel Life is still an entertaining movie break with a lot of style.