In Elephant Games' hidden-object adventure/Jumanji lookalike Surface: Game of Gods, you play Alice Russell, whose friends go missing when they take part in a strange game you yourself were supposed to be a part of. Turns out the game, played every three years, has some very serious rules, and the players are contractually bound to face the threats that pop up when they roll the dice or die, which is something I would have thought we'd all learned to avoid when Quark taught us what a terrible idea that is. With your friends in danger from tabletop gone wrong, you have no choice but to sign the contract presented to you by the man with the infinitely smug and punchable face and play yourself to save them, presumably absolving yourself of ever feeling obligated to drive one of them to the airport or pay for pizza ever again. As you play, you'll follow your friends into the scenes they've trapped themselves in, solving puzzles and hidden-object scenes, as well as helping free the many centuries' worth of souls trapped in the game. Surface: Game of Gods is an appealingly creative and beautifully presented hidden-object adventure perfect for players looking for something cinematic and just the right amount of creepy-cool for an evening's play. 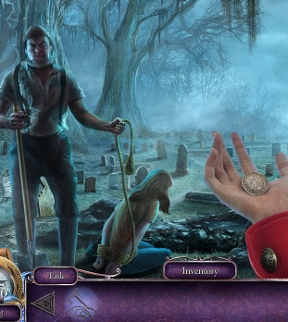 Game of Gods has an interesting plot despite its similarities to Jumanji, though with all the people who have apparently lost the game over hundreds of years, the overall difficulty and complexity probably should have been a bit higher to reflect that, since most of the challenges facing Alice are pretty simple, making everyone else look dense as a result. Admittedly, the story implies winning is less about cunning or intelligence and more about overcoming ones fears and faults, which is much harder to do than simply solving a puzzle. Early on you discover the game... uh, the game within the game, that is... is actually a means to satisfy a bunch of bloodthirsty gods who were inadvertently called to earth long ago, and players have been brought in to try to appease and defeat them ever since. It's more creepy-cool than genuinely scary, though there are some beautifully executed scenes and well done jump scares, and the overall design is absolutely gorgeous. Areas are wonderfully illustrated and the soundtrack is surprisingly top-notch too, though people tend to look more than a little weird when they animate while speaking. 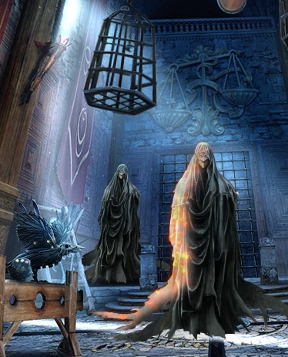 Though the gameplay is a lot more straight-forward and familiar than the game itself, Game of Gods makes up for it by taking you to a variety of distinctive locations, all with their own themes and villains. One neat mechanic is collecting cards that have special single-use powers for you to "play" and pass obstacles, and many of the hidden-object scenes incorporate different playstyles, like tracking down pairs of objects or specific items needed to advance a story. More importantly, however, is that despite a lot of backtracking, you never feel like you're partaking in random busywork to pad the length of the game. There's a ton of different things to see and puzzles to solve here, and the way the game weaves its story into all of it is surprisingly effective. While slow to start and still on the easy side, Surface: Game of Gods is one of the best hidden-object adventures to come along in a long time. Just remember, kids... if a mysterious stranger who looks like he needs to be throttled with his own cravat invites you to play a game for your heart's desire, just say no. Unless your heart's desire is to be a Powerpuff Girl. Always be a Powerpuff Girl.

Hey, guys. Just bought this through your link, and so missed the coupon code that would have cut the price from $15 to $9 if I'd gone via Big Fish.

Not enough to make a stink about, this time, but it might be nice if you;d adjust your interface to check for those...

Hi Pete! I'm very sorry about that. If you want to send me a message at dora AT jayisgames DOT com I'd be happy to give you a coupon code for a free standard edition game to make up for it. While we can't set our code to check for coupons, as the code just sends you directly to Big Fish's checkout site, I can at least set buy links in the future to send you to the game's page instead where you would at least see the coupon popup yourself.

Thanks, but is OK. A good response, and probably a good solution.