Researchers agree: playing logic puzzles requires your brain. Exactly what's required of it, they can't seem to agree, but it's the general consensus that the net effect is positive. Enter Strimko, a sudoku-like game of logic that involves placing numbers on a grid. Instead of a dry, angular box, however, you get to work with number chains that snake their way around the grid, adding a nice, flavorful twist to the familiar concept. 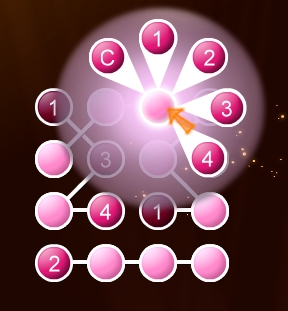 Strimko is basically sudoku with fewer boxes to think about. The principals are the same: fill the grid with numbers and don't repeat digits in each column/row. The difference is that number sequences wind through the puzzle, zig-zagging their way from one side to the other. These number trains cannot contain duplicates, meaning you have to think a little differently to solve each puzzle.

Adding/altering numbers is a snap: just click on a pod to bring up a small menu, then make your selection from there. Click on the side of a circle to add an annotation, just in case you aren't entirely sure which number should occupy that space.

Strimko is divided into a number of modes, each with its own healthy portion of puzzles to complete. Classic/zen mode is your destination for straight-up puzzle solving, while Story Mode is essentially an excuse to tack on mini-games and an overall goal to playing strimko puzzles. Pave and Fit switch things up a bit and require you to rebuild puzzles by placing completed chunks of numbers onto the grid. And then there's Tri, the last unlockable mode, which treats you to triangular puzzles. That may not sound like much in writing, but switching your perspective from columns to diagonals can be pleasantly tricky. 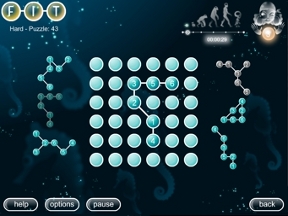 Analysis: When it comes to pure puzzles, Strimko doesn't have as many as other similar games, but its variety and style make it an offering to consider. The game looks spectacular, with smooth colors and menu items that work like a charm. The interface is simple as well, providing the next best thing to pen and paper.

Strimko's variety is a strong point, but it doesn't come without a drawback or two. Instead of lobbing a fistful of number puzzles at your face, you're treated to several different modes of play, each with a different twist on the solving logic. The modes aren't as radically different as they could be, leaving you just south of satisfied at the end of the day. Either more unique game modes or a more expansive catalog of puzzles would make Strimko an unbeatable winner, but instead the game went the middle route and doesn't quite achieve either.

It may not be the end-all game of number logic puzzles, but Strimko delivers good challenge with a little variety and a lot of style.

Of note: the full version of this game is FREE today on the iPhone.

Just to let you guys know, it seems that the game discount has changed from 25% to 50%

Suave interface for a Sudoku game. The linked slots
remind me of astrology signs, which make a nice resonance with the theme of the game in adventure mode, especially in the later levels when the chains get longer.

One suggestion. Since there is a button to clear all annotations, why not also include the option to commit all annotations? I find that I could have used such option several times in the game.