So, Star Wars. From what we can tell it's some movie about a guy named Jar Jar who has a speech impediment but somehow joins "the force" and saves a clown from living on the dark side of that metal space moon thing. We're a little sketchy on the details, but what we're not sketchy on is Star Wars: Knights of the Old Republic and how unbelievably amazing that game was ten years ago and how it's still epic today. Originally released back in 2003, KotOR defined the western RPG and managed to secure a spot as one of the most epic modern role playing games ever released. And now it's out for iPad 2 and newer devices! 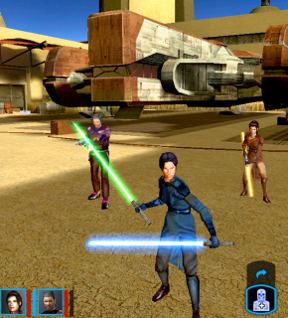 The iOS release of Star Wars: Knights of the Old Republic is essentially a port of the original game refit to work with touch screen controls. Swipe to move through the environment, controlling everything from your party to your inventory using easy on-screen icons. The game is practically an even split between combat, conversations and character management, but it's balanced so well with the story it all just comes across as one big package of awesome. Will you slide on over to the dark side, or are you the genuine savior the Jedi Order desperately needs? That's your decision, and KotOR famously lets your actions determine your fate. Neat, right?

Just like our recent Wizardry article, we could go on and on about KotOR and never get tired of reading those delicious words. But the reality of the situation is this: if you're familiar with Knights of the Old Republic, you don't need convincing, this port is good. And if you weren't around ten years ago to get familiar with it, this is your best chance. It's expensive for an iOS game, and it's a hefty download at 2.5 GB. But you'll be hard-pressed to spend your mobile gaming dollars in a better way. Knights of the Old Republic practically feels like it was made for the touch screen. Just be ready to hold your iPad for a few dozen hours.