Imagine a record spinning around, and you'll have a feel for what Soundodger from OneMrBean (Michael Molinari), is like. What's that? You don't know what a record is? How old are you anyway? Does your mom know you're on the internet? Well as long as you're here, you might as well play. 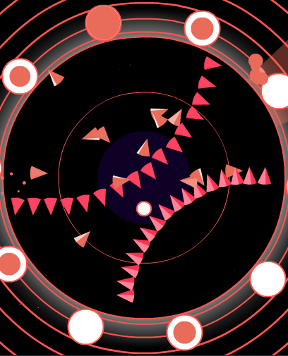 In this musical avoidance game, the object is to keep away from the arrows and other shapes created by the songs. Projectiles continuously shoot out at you in time to the music, and you can shift into slow motion to help avoid these. Use your mouse or the [arrow] keys to control yourself. Click or press [shift] to slow down time, and press the escape key to pause. Your score is presented in terms of percentage of bullets dodged. Any arrows that hit you, or that exit the screen while you are in slow motion, detract from your score. A small circle begins in the middle of the screen and grows larger as the song progresses, giving you a sense of how much longer the song will last. A lightly tinted circle inside that circle gives you an idea of your score as you go along. Earning percentage points allows you to unlock more songs.

Soundodger's nothing if not pretty. You could fall into a trance-like state just enjoying the patterns the songs bring with them. But good looks are not all there is to like. While the gameplay isn't exactly innovative, the controls handle nicely and the ability to slow down time (and the music) is fun. There are plenty of interesting songs to keep you playing in a variety of styles, though they tend toward the chiptune. Once you've played through a song, zen mode for that track is unlocked. While the whole game has a zen vibe to it, during zen mode you don't take any damage. It's a way to experience the songs and patterns they make without having to worry about survival. Go ahead and turn your speakers up, your lights down, and take the game for a spin.

The link took me to a website, but there was just a black screen. I did see a link to the same game on the website itself, and when I clicked that, it worked.

Thanks for the heads up...looking into it now.

Should be working now! Thanks again for letting us know.

Name of the very final song?
The game is way too hard

All songs are really good, pity that I am not skilled enough to get the to final song...

You know what would be really awesome? A level editor for this game.