A land full of light has been plunged into darkness. The Sun Gem has been broken in two. "Perhaps these hopes were misplaced," laments the narration. So begins Soluna, a platform game with a retro aesthetic that oozes artistic mastery. The creators at Diestware prove they know how to set a mood in this minimalist narrative, using simple controls and a simple color palette to tell a story that sneaks into your head and stays there. You play an unnamed warrior who must reunite the pieces of the Sun Gem and bring light back to your darkened home. Use the [arrow] keys to move, jump and cling to ledges, and use the [S] key to attack the foes you find along the way. You'll also encounter friends holding spears that you can speak to with [A] who give you hints and nods at a greater mythology of the Soluna universe. All of this adds up to an engrossing browser experience. 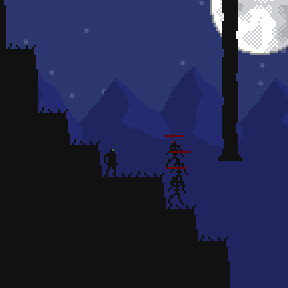 Simplicity isn't necessarily a negative in and of itself, but the one button combat isn't as balanced as it could be. You might find yourself avoiding enemies rather than engaging them. The Ocarina of Time-style boss battle offers more variety, having you knock energy blasts back at your foe, and timing and reflexes are a must. Beyond that, it's all about exploring the weird, dark world you're plopped in the middle of, like a film noir Knytt. The levels have a great vertical span, meaning there's plenty of climbing, jumping and falling to get where you need to go. There's something weirdly satisfying about watching enemies tumble into blackness when they try to leap between two platforms in vain. It might be a bit minimal, but Soluna offers enough mood and challenge to keep browser game fans engaged.

-_- The final battle is REALLY aggravating. How many times do I have to

hit the wizard's orb back before I hit him and he starts taking damage? C'monnnn :( I know, I know, this only means my timing must suck.

The very first thing I did in the game was go east, climb to the top of the vine in the first hole, and jump across to an area where the developer evidently did not intend players to go. I ran over some boring landscape that soon became unfinished (no grass), and then fell off the side of the world. Did anybody test this game?

I couldn't make it very far toward the east before giving up. A lot of little things add up to make it a painful grind. It's too easy to die, and then you get reset waaaay back at the beginning of the level.

Actually giving us a clue what the hell to do to hurt him MIGHT be nice?

if you've played Legend of Zelda and fought Ganon

Some critiques for the dev if they're paying attention:

Good game, fun to play, but needs tweaks to the gameplay. Story's too short to be engrossing, so more attention needs to be put in to gameplay. I suggest making it more exploration themed, as the maps were interesting and fun to explore, but that didn't pay off--even if the guys that were sprinkled around had more dialogue focused on story- or world-building would have been a good pay-off--maybe add some secret areas.

A guard mechanic would have been nice, as the only way to avoid attacks was to either run (which didn't work, since they would just chase and attack as soon as you tried to turn to attack again), or swing and knock them just out of reach. This was especially annoying as the game would only read ~75% of my key presses on the 's' key. Every 4th consecutive press wouldn't be read, which ended up costing me the boss fight 3 times. Talk about aggravating.

I don't mind climbing the hill to the boss before I know it's there, adds to the mood and setting, but dear god is it annoying after the second time it's killed you. Spawn closer.

This is the skeleton of an actual boss fight. Spice it up a little. Don't make it wait for all the grunts to be cleared before it attacks, that just makes it boring and repetitive. Give it a few different attacks to spice things up, make them randomly selected so there isn't a boring and repetitive pattern.

Make those changes and it could easily be a 9/10 deserving of a larger game. As is I would only say 4/10, but I don't regret having played it, so it was still fun.

I managed to replicate this glitch, but it wasn't simple since you don't automatically jump at the tops of the vine-ladder-things when you just hold up, and if you're not holding up you automatically descend, so you have to be tapping up really fast.