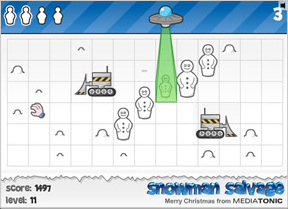 Paul Croft sends word of his brand new seasonal viral game to help promote the launching of MediaTonic, a new media company in the UK.

Snowman Salvage is a fast-action Flash game in which you are tasked with maintaining a number of snowmen against increasingly heavy odds.

The first problem about snow is that it falls. So, being the good-natured beings that most of us are, we look to the bright side and make snowmen as a means of escape from our discomfort. However, the second problem is that snow will eventually melt and therefore a snowman requires maintenance to survive, accomplished by simply adding more snow.

And that is the basic premise to the game that starts you out easy by requiring a single snowman, and then ramps up in difficulty with each new level. To succeed and move on to the next level, you must build and maintain the required number of snowmen for 30 seconds. Later levels require you to maintain a minimum number of complete snowmen, or it's game over.

Control is with the mouse. Click drag and drop a clump of snow onto another clump to make an even larger clump. Eventually the clump will take shape into a snowman, but a clump left unattended will melt away to nothing. Drag and drop clumps quickly to build as many snowmen as needed, and then continue adding snow to each to prevent them from melting away.

Later levels introduce hazards to avoid and combat, such as snow plows, fires, and alien abductors. Snow plows and alien spaceships can simply be clicked on to attack. Fires must be put out with snow.

In between levels you are given an upgrade point to spend on any of four (4) variables that influence game play: carry more snow; more snow falling; bigger snow falling; do more damage. The first three affect the amount and handling of snow, the last affects combat with hazards.

Analysis: Overall, the nicely designed and well-produced game is a fun seasonal romp in the snow. Paul has done an excellent job of keeping the game play interesting while gradually ramping up the difficulty of each level. The upgrade system provides the player with a sense of agency and is a nice touch to the game that adds depth. However, the drag-and-drop gameplay mechanic becomes tiresome quickly, an annoying trait that may have been lessened a bit with a simple click to pick-up snow and then another click to drop. A smallish complaint to an otherwise fun little game.

If the link isn't working above, you can also play this game at Shockwave.com (warning: lots of ads that may interrupt your gameplay.)

so.. i should be doing my paper that's due tomorrow.. but nope.. i'm addicted to this game... my 2nd time through and i got 3rd HIGHEST SCORE!! this is the first time i've been on the high score list!! YAY! ok.. back to work and studying. *sigh* thanks for the fun break, jay! :)

Fun fun fun!! I should be working right now, but for the first time in my life I ended up the highscore list. I'm so proud of myself!! :)

A nice little game... The drag and drop does get annoying. Nice elements to keep everything interesting (the aliens are here!). Good game, and great review!

I wish they would've introduced more ellements of gameplay earlier on, I got tired of playing at the 'keep 5 snowman alive for 30 seconds' mark.

That's a good point, Derek, and one I didn't mention in the review.

The first time I played I appreciated the gradual easement of difficulty, and yet on subsequent plays I found the early levels to be a little too basic.

I believe that to be one of many great challenges game developers face when designing a good game. There is a delicate balance between hand-holding and jumping right into the heart of the game play.

Tutorial levels can be a good solution to this with which new players begin. Then on subsequent plays the tutorial levels might be skipped unless specifically asked for.

I must say that I'm a little bitter about the people who are at the top of the high score list now. There is really no way they could have gotten that high of a score without cheating, right? Someone should delete those cheaters!

I'm Paul the game creator :) Thanks for your great comments! Just to respond to a couple:

I've had quite a few problems with the difficulty curve! A lot of people say too easy, a lot say too hard, a lot say just right! In order to make a compromise, I have made it so you can earn bonus upgrade points by building extra snowmen in the early levels. The more extra snowmen you build, the more bonus points its possible to earn, upgrade quicker and the later levels become easier....

And about the highscores, they are legit! When you reach the last level (25) you get to double your score every 30 seconds you keep your snowmen alive during a crazy onslaught of enemies. I foolishly thought no-one could possibly survive this for longer than a minute or so (I couldnt do more than a few seconds!) so I didnt put a cap on it, but people have actually been staying alive on this level for ages (i think the guy who has the top score did it for 15 minutes!)

I've been thinking about this a lot and what I think i might do is either put a cap on the level so you can only double your score say twice, or try and somehow make it even harder.

Cheers, Paul. And I think that's an excellent tradeoff you made with respect to the early levels. The extra points does indeed give someone added incentive during replays, enough to make the earlier levels a bit more challenging. Nice job. =)

eh, I don't like it too much....though that may just be due to me using a touchpad...which quickly tires out my finger.
agh *cramp*
I'll probably try it later with a mouse, lol

Apparently there is a cap, as I am now in a five-way tie for first place. I can't imagine those other people just happened to get the same score as me.

The real problem here might be that level 25 just isn't quite hard enough. I had a heck of a time getting past 22, and I think it may have been the hardest, but 25 was frankly quite easy.

Still, overall, I think this was a pretty cool game, and could maybe even be one of the best games around with a little tweaking, although I admit I wouldn't know exactly where to begin.

I just noticed my actual score was higher than the one displayed:
http://home.doramail.com/bbrucker2/snowscore.jpg

I find the levels where they give you tons of snowmen and you have to keep half alive the hardest.

Humm the upgrades are capped at level 10, which can be reached by stage 12 without much difficulty.

And the score now seems to be capped or at least 10+ people have hit the limit.

Yeah, I don't like how the upgrades are capped D:

Its a pretty good game. Seems impossible to get in the top high scores though XDD

Awww, I was hoping at Lvl 10 "More Snow Falling" and lvl 10 "Bigger Snow Falling" that the snowmen would be building themselves...

(Srsly, though, More and Bigger should go onto like lvl 20 and cause enough snow to fall that the snowmen are built by chance :P)